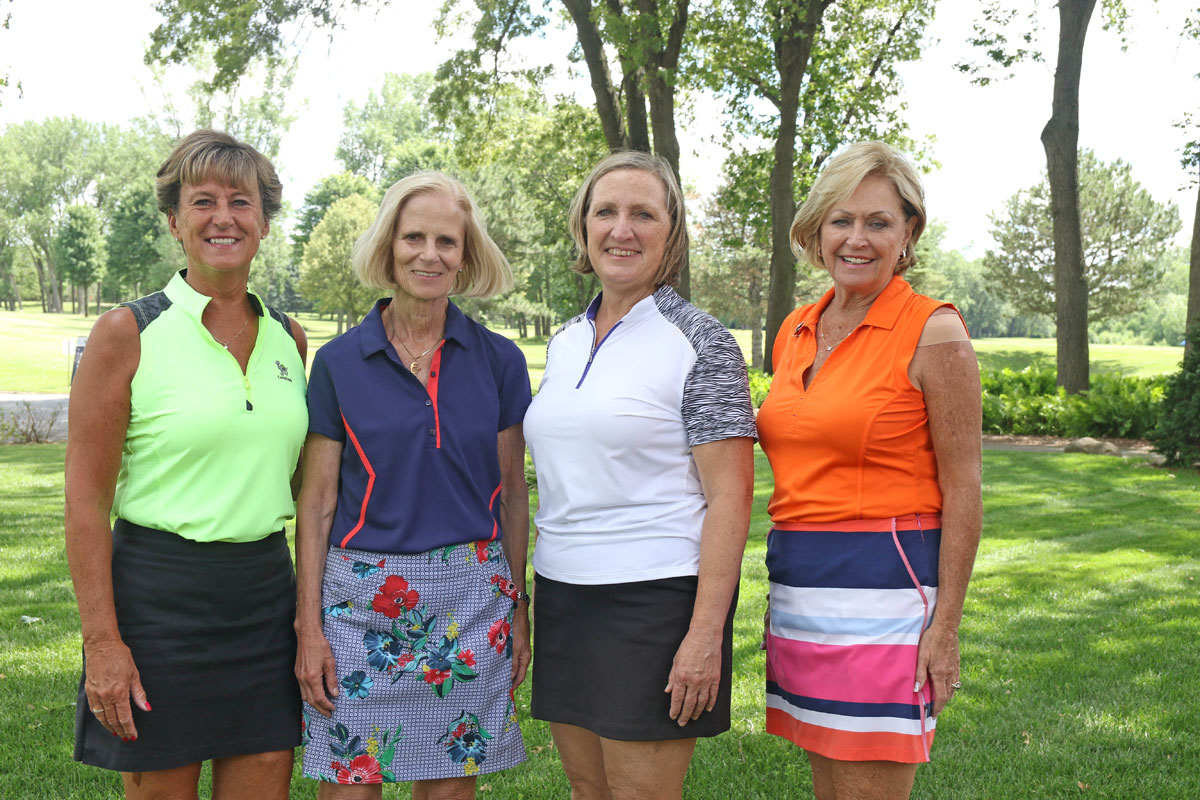 Torrenga Drains First Hole-In-One in Powers-Purdue Northwest History With her first shot of the day, Kay Torrenga became the first person to record a hole-in-one in the 37-year history of the Powers-Purdue University Northwest Golf Invitational Monday at Briar Ridge Country Club.

“It’s the first hole in one – it took 37 years to achieve it,” said former longtime athletic director John Friend, who now serves PNW in an athletics consultant role. “I’m particularly pleased it was Kay Torrenga, who has been a very loyal participant in this outing for many years and we appreciate that.”

Although it was the first hole-in-one in the history of the Powers-Purdue Northwest event, it wasn’t the first for Torrenga – she did it 25 years ago, also at Briar Ridge.

“And I was 8-and-a-half months pregnant,” Torrenga said with a laugh. She added on Monday’s shot: “I think I was the last one (of the foursome) to hit, I picked out my favorite club, and it went straight – bounced twice and rolled in.”

The annual event featured nearly 150 golfers and serves as the biggest single-day event that supports Purdue Northwest student-athlete scholarships, contributing more than $950,000 for student aid in its first 36 years.

"I have known Danielle since she was in grade school and she has always been an amazing athlete," Wiejak said. "We are incredibly lucky to have her on our roster as she brings so much speed and athleticism to our back court. She has played three sports her whole life and I am excited to hone in her skills on just volleyball and help her reach her full potential."

Spencer received all-conference accolades while helping the Hawks earn the No. 1 ranking in NCAA Division II for service aces. During her prep days, she was an all-conference and all-area award recipient for Aurora Central Catholic High School, while helping her team make a regional championship appearance.

"Morgan is a transfer from a Division II school and I look for her to offer her expertise to our team as we embark on our first season of Division II," Wiejak said. "She has been a two-year, six-rotation starter and I have no doubt she will find a way to get on our court. Morgan also brings her competitive fire as well as her leadership skills to our team, and as an incoming junior, I look for her to mentor younger players and be a part of our overall athletic community.”

“We are excited to bring Niki on board to lead the PNW Pride Softball program,” Costello said of Stansell. “Her coaching experience in NCAA Division II will greatly aid our transition into the Great Lakes Intercollegiate Athletic Conference and her enthusiasm for the game and the student-athlete experience makes her the perfect fit as our softball head coach.”

As the lead assistant at Illinois-Springfield, Stansell helped lead the Prairie Stars to a 87-71 overall record in three seasons. A former shortstop at both Illinois State and the University of Georgia, Stansell helped elevate the UIS defense from a 125th ranking in NCAA Division II all the way to 15th, improving the its defensive percentage to a near-perfect .964 and program-record 36 double plays in 2017.

“First, I want to thank God for this opportunity, and I’m extremely grateful for Rick Costello, Jen Madgiak and the athletic department at Purdue University Northwest for their support and trust in me to lead the program,” Stansell said.

“I can’t wait to meet with the members of the Purdue family as we get the ball rolling. I feel very honored and blessed to be the head softball coach at PNW.”

Among other school records and a Top-10 national ranking in the Midwest Region in 2017, the UIS program also reached another important mark: obtaining a 3.71 team grade point average, the highest in UIS department history.

Stansell was also a major force in recruiting 27 student-athletes to the Illinois-Springfield softball program in three seasons, and coached one all-region player, three all-Great Lakes Valley Conference players, and one CoSIDA Academic All-American.

She also spent one season as the first assistant coach at Illinois Wesleyan, helping the squad set the single-season record for wins (41) that went along with a stellar 21-game winning streak. IWU reached the NCAA Super Regional after capturing both the regular-season and conference tournament championships.

At her alma mater, Stansell also served as an academic advisor at NCAA Division I Illinois State in addition to a softball graduate student manager and student assistant coach. As a player, she was a first-team all-Missouri Valley Conference honoree and a Lowes Senior Award Nominee. Stansell was also a starter on the NCAA Super Regional qualifier Georgia Bulldogs in 2008.

Stansell earned her bachelor’s degree from Illinois State in recreation and park administration and later obtained her master’s in kinesiology and recreation, also from ISU.

The Pride softball program finished the 2017 season with 29 wins, reaching its third consecutive Chicagoland Collegiate Athletic Conference postseason tournament and reaching the second round after an opening postseason win over St. Ambrose. PNW will compete in its first season of GLIAC play in 2017-18, in its second year as a provisional member of NCAA Division II.