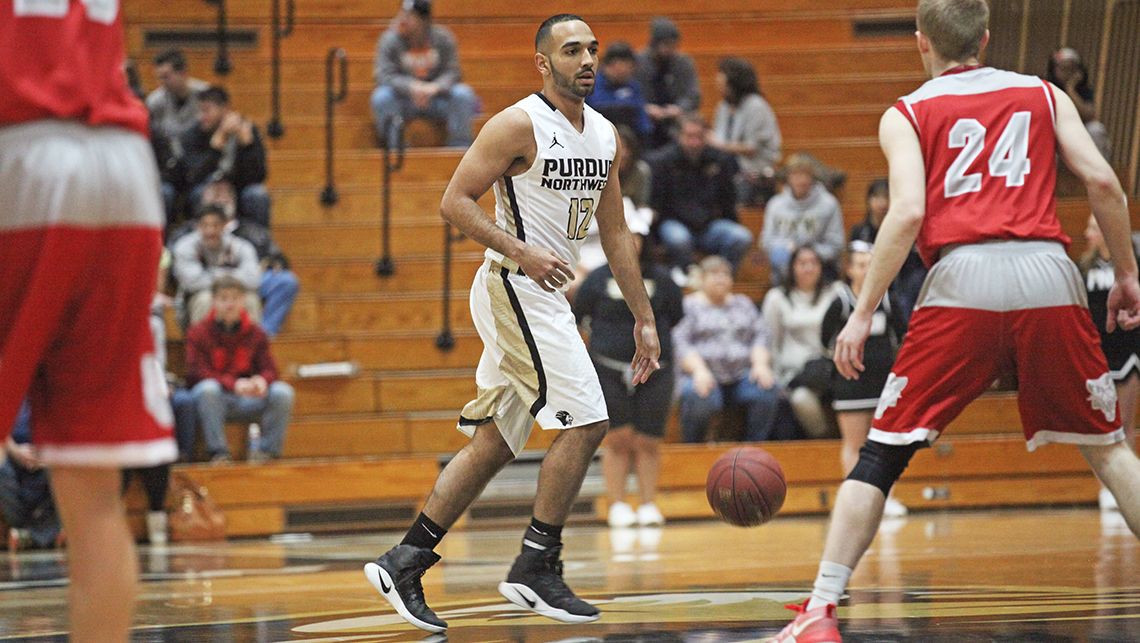 The Pride (11-14, 9-8 CCAC) were led by Torrance Johnson (Chicago Heights, Ill./Chicago Hope Academy) and Mike Williams (Gary, Ind./Lew Wallace) who chipped in with a team-high 14 points.

Duron Ivery (South Bend, Ind./Washington) recorded 12 points on four three-point field goals while Tyree Coe (Fishers, Ind./Fishers) added 11 points to round out the leaders for the Black and Gold.

IUSB would extend its lead throughout the remainder of the half, taking a 44-34 lead heading in to the break.

The Titans would have a lead with under 10 minutes remaining in the final period, but the Black and Gold kept fighting and went on a run of its own to cut its deficit to one, 58-57.

Both teams would trade baskets for the next few minutes, with the Pride hanging tough and still trailing by one, 67-66 with 2:26 remaining.

IUSB would stop any final comeback efforts from the Black and Gold, while hitting some clutch free throws at the end and come away with the 75-70 win.

Purdue Northwest had a stellar performance from the charity stripe, connecting on 11-of-12 free throws compared to 12-of-21 by the Titans.

The Black and Gold return to action Wednesday, Feb. 8, when they host the number one team in the CCAC North Division St. Francis (Ill.) at the Fitness and Recreation Center in Hammond. Tip-off is set for 7 p.m. (CT).

The win was the Pride’s (20-6, 15-2 Chicagoland Collegiate Athletic Conference) fifth-straight and tied PNW for the most CCAC wins since the 2013-14 season, when then-Purdue Calumet finished 15-2 en route to a regular-season conference championship.

Thompson’s performance helped her eclipse the 1,000-point mark for her career, making the point guard the 21st player in PNW women’s basketball program history to join the century club. She needed just eight entering the game, and went into halftime with 12, as the Pride held a slight 37-25 advantage after trailing by as many as 12 in the first quarter.

That lead was just four, 55-51, heading into the fourth quarter, and IUSB (9-17, 5-12) was able to rally to take a short-lived, one-point lead (60-59) on two free throws by Loren Vukovitis at the 6:42 mark. But PNW would answer with several defensive stops and a layup and jumper by Deno to regain a lead the Pride would not relinquish, as PNW connected on 6-of-8 in the final five minutes to seal it.

But the Pride capitalized on 16 points off 14 IUSB turnovers and outscored the Titans 28-9 in second-chance points, finishing with 19 offensive rebounds.

Rounding out singles for PNW, Breanna Sanchez (Griffith, Ind./Griffith) won at No. 6 singles in a three-set thriller, taking the first set, 7-5, falling the second set 4-0, then won the deciding set, 10-8.

Foltz and Evers won at No. 1 doubles, 8-0, against CU's Kaylee Tucker and Sarah Wakefield.

PNW returns to action Feb. 19 when the Pride take on Saint Joseph's College at Match Point starting at 3 p.m. (CT)