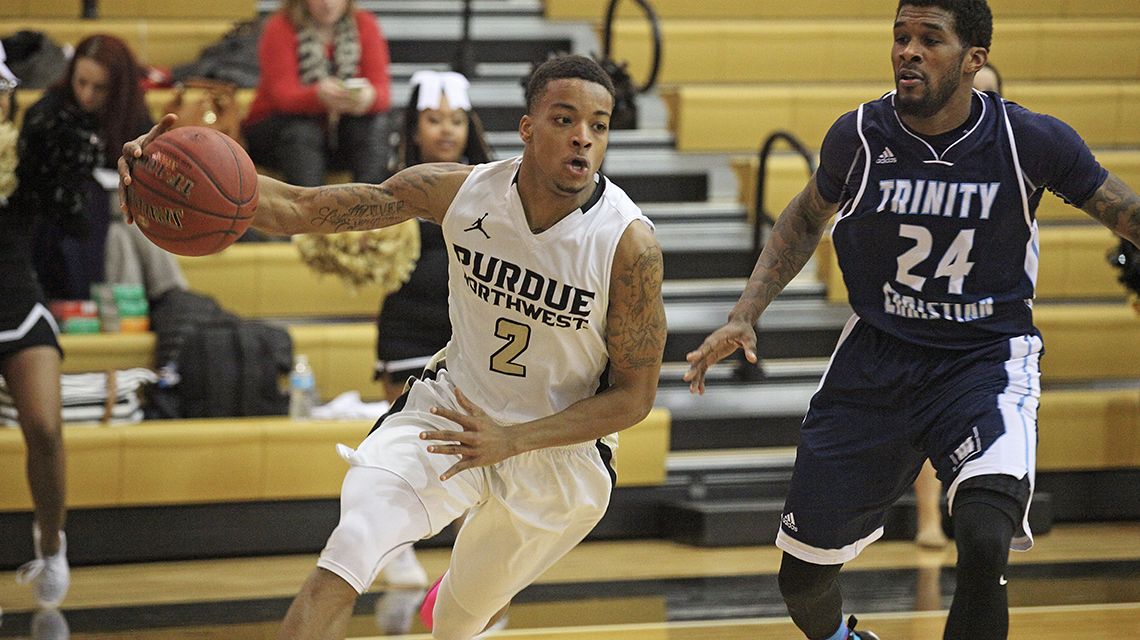 PNW Falls to Trinity Christian; Four-Way Tie for First in CCAC South The Purdue University Northwest men’s basketball team put together a valiant second-half effort, but it wasn’t enough in a 87-74 loss to visiting Trinity Christian College Wednesday night at the James B. Dworkin Center.

The Pride (13-15, 11-9 Chicagoland Collegiate Athletic Conference) now find themselves in a four-way tie for first place in the CCAC South Division, as St. Francis (11-9) fell to Olivet Nazarene (11-9) Wednesday and Calumet St. Joseph (11-9) fell to Holy Cross. Saturday’s final regular-season game at Governors State will be pivotal as the Pride try to capture the top spot, which would mean an automatic bid to the NAIA Division II National Tournament.

Spring hit back-to-back triples during that span to aid the run.

But Trinity Christian would withstand the charge, as Jordan Perry would answer with two layups of his own to push the advantage back to seven, 57-50, with 9:16 left. Trinity would lead by as many as 14 (68-54) with 5:32 left before one final PNW run — with the help of a Caleb Brannon (Lebanon, Ind./Lebanon) triple and two Johnson buckets — that cut that deficit to just four, 70-66, with 2:55 left.

But the Trolls would end the game on a 17-8 run to seal the win.

TCC never trailed in the game after opening the contest on a 20-5 run.

Five players scored in double-figures for the Trolls, led by Perry’s 27 points and 12 rebounds.

PNW returns to action Saturday with a pivotal matchup in University Park, Ill., at Governors State. Tip-off is set for 3 p.m. CT.

Purdue Northwest Holds Off Trinity Christian, 76-68 Despite a second-half comeback from visiting Trinity Christian College, the No. 15 Purdue University Northwest women’s basketball team withstood the charge to capture its 22nd win of the year in Wednesday’s 76-68 league victory.

TCC’s Jessica Bianchi brought Trinity Christian within two, 58-56, with 6:56 to go, but Deno would answer by getting fouled on a 3-point attempt and draining all three free throws to push the lead back to five.

TCC would get within two one last time, 63-61, on a Bethany Jansma layup, but Deno would answer the call once again with a jumper in the lane to give PNW a four-point advantage, 65-61.

Jansma led the Trolls with 23 points and Lauren Stokes added 16 in the loss.

Purdue Northwest returns to action Saturday with a road contest at Governors State to close out the regular season. The CCAC Tournament quarterfinals begin Wednesday, Feb. 22.

“The constant focus for our athletic programs has always been students first, athletes second,” PNW Athletic Director Rick Costello said. “We are so proud of our Pride student athletes for continuing to strive for a balance of academics and athletics as move forward into NCAA Division II membership.”

The PNW women’s basketball team, which currently stands as the 15th-ranked team in NAIA Division II with a 21-7 overall record, led the way with a stellar 3.73 team grade point average, with women’s tennis (3.53), women’s golf (3.50) and women’s volleyball (3.44) not far behind.

“Our student-athletes are constantly striving to be better in the classroom, and the results from the last semester show that,” said Jen Madgiak, Associate Athletic Director for Academic Services. “As a staff, our goal is make our student-athletes into successful members of society and we’re very proud of the progress we’ve made in the classroom.”

Other academic accolades for PNW over the fall semester to present include:

Men’s Soccer senior Sergio Reyes was named a CoSIDA Academic All-American, the fourth student-athlete in PNW history to do so: