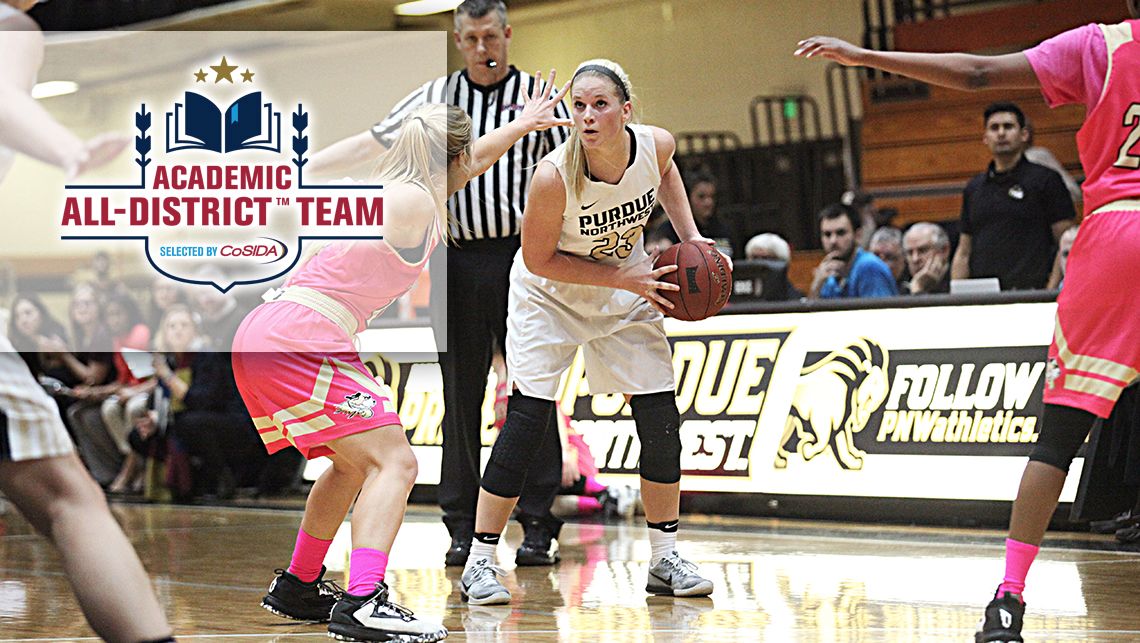 Deno is now eligible to attain the CoSIDA Academic All-American award as a senior, with voting to begin next week and the announcement to follow on Feb. 27.

To be eligible for the CoSIDA Academic All-America award, student-athletes must attain a minimum 3.30 cumulative grade point average, be at least a sophomore academically, and play in at least half of respective sport contests.

Deno was one of five selected in District 2 on a ballot of 44 nominees. A hospitality and tourism management major with an emphasis in fitness management, Deno carries a 3.81 grade point average and is currently averaging 20.3 points and 7.6 rebounds per contest.

The senior recently eclipsed the 2,000-point plateau, becoming just the second player in PNW history to do so, and stands No. 2 on the all-time career scoring list with 2,106 points. She also put together the highest single-game scoring effort in PNW history, netting 51 points on 18-of-24 from the floor in a 119-105 win over Olivet Nazarene Feb. 1.

Deno was a CCAC First-Team All-Selection in 2015-16 in addition to NAIA Third-Team All-America honors.

The CoSIDA Academic All-America program recognizes the student’s top student-athletes for their combined performances athletically and in the classroom.

The Pride (12-14, 10-8 CCAC) sit just one game behind the Fighting Saints (17-10, 11-7 CCAC) in the North Division of the CCAC Conference with three games remaining in the regular season.

Cyril Lewis (Houston, Texas/Virginia Union) and Chandler Spring (Covington, Ind./Covington) each added 11 points on the night to round out the double-digit scorers for the Pride.

The Black and Gold jumped out of the gates fast, taking a 25-13 advantage with just over 10 minutes remaining in the opening half.

St. Francis would cut in to its deficit with 2:14 remaining, 32-26, but the Pride would answer back and take a ten-point lead leading heading in to the break.

With the Pride owning a double-digit lead for the majority of the second half, the Fighting Saints tried some late game heroics, but the Pride would refuse to let down, coming away with the 91-84 victory.

PNW returns to action Saturday, Feb. 11, when they travel to Notre Dame, Ind. for a CCAC contest with Holy Cross. Tip-off is set for 2 p.m. (CT).

PNW Forces OT with #1 USF; Falls 78-69 Despite a valiant fourth-quarter comeback to force No. 1 St. Francis (Ill) to its first overtime game of the season, host and No. 15 Purdue University Northwest couldn’t answer late in Wednesday’s 78-69 loss at the Fitness & Recreation Center.

USF opened the contest leading 25-18 in a offensive-minded first quarter before both teams evened at 10 each in the second frame with the Fighting Saints up at the break, 35-28. Thompson led the way in the first 20 minutes, scoring 10 points on 4-of-10 from the field.

The third frame saw yet another even quarter at 17-apiece setting up PNW’s pivotal fourth frame, with the Saints up seven, 52-45. Deno would hit a jumper and then a triple with just under four minutes to play to bring the Pride within four on two separate occasions, but the Saints answered both charges.

It looked like USF might pull away on Kaitlin Aylward’s jumper to give the visitor a six-point advantage, 63-57, with 2:16 left, but the Pride would have one final run. Two free-throws by Deno and a USF turnover led to a Thompson layup to bring PNW within two, 63-61, with 1:08 left. After a timeout, the Pride capitalized off two missed USF free throws to set up Deno’s tying basket, a layup off her own miss with 22 ticks to go.

Charnelle Reed’s answer wouldn’t go to force the Saints to their first overtime period of the season. Deno opened the fifth frame with another clutch triple – she would finish 3-of-7 from downtown – but USF would outscore the Pride 15-3 down the stretch to seal the win.

USF also forced PNW into 22 turnovers compared to just 14 for the Saints.

The Pride return to action Saturday, Feb. 11, with a CCAC contest in Notre Dame, Ind., at Holy Cross College. Game time is set for noon CT.

The 5-11 guard put together the best performance of her career and the best single-game scoring output in PNW program history with a 51-point game in the 119-105 win at ONU, finishing an astounding 18-of-24 from the field and 5-of-7 from downtown. She followed that up with 22 points in Saturday's hard-fought, 75-73 win at IUSB that helped PNW capture its 20th victory of the year, giving 10-year head coach Tom Megyesi his sixth-straight campaign with 20 wins or more.

Just three games ago, Deno became just the second player in PNW history to surpass the 2,000-point mark for her career, as the senior now stands with 2,078 points.