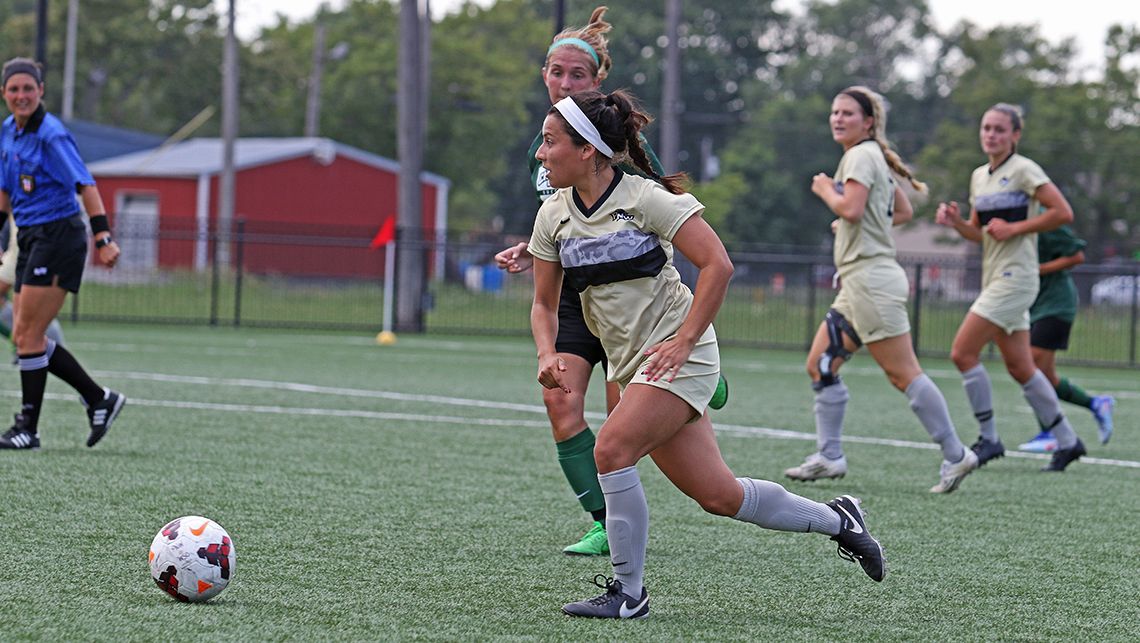 Purdue Northwest (1-2) stood close in total shots (seven) with the Hornets (1-1), but Harris-Stowe was able to get the game winner early in the second half, as Megan Wilson connected on the game-winner in the 49th minute on a counter attack from midfield. Wilson hit a hard shot from the side of the 18-yard box that went off the back post and in, just beating starting PNW keeper Lucie Ashmore (Greystones, Ireland./St. Gerards School), who finished the contest with three saves in all 90 minutes.

The Pride had their best chance to score on a corner kick from freshman Amari Cooper (Chicago, Ill./Thornwood), but the ball bounced off the line and was denied by the Hornets’ defense.

Jenna Vitale collected the shutout for Harris-Stowe State, finishing with five saves in her first win of the year.

Senior Alex Cordova (Hobart, Ind./Hobart) led the way for the Black and Gold, finishing third overall in the field of 32 runners, with a time of 17:06.

His cousin and junior Salvador Cordova (Hammond, Ind./Bishop Noll) was the next finisher for the Pride, placing seventh overall with a time of 17:19, while freshman Chris Ramos (Hobart, Ind./River Forest) placed 11th overall in his first race for PNW with a time of 17:39.

Freshman Robert Corning (Lowell, Ind./Lowell) finished fourth for the Pride and 12th overall with a time of 17:59, and junior teammate Roger Jachna (Dyer, Ind./Lake Central) rounded out the top five for the Black and Gold placing 16th with a time of 18:47.

Sophomore Amanda Baker (New Lenox, Ill./Lincoln Way Central) was the next finisher for the Pride, placing 10th overall with a time of 22:06 to give PNW three runners in the Top 10.

Sophomore Sara Kubas (Orland Hills, Ill./Andrew) finished fourth for the Pride, and 12th overall with a time of 22:20 and freshman teammate Kristen Johnson (Plainfield, Ill./Joliet Catholic) rounded out the top five for the Black and Gold placing 16th with a time of 26:42.

Grace College finished first overall with 23 points while the host Purdue Northwest team finished second with 43 points. St. Mary of the Woods rounded out the teams with a third place finish and 69 points while Indiana Northwest did not place but had four runners competing in the race.

The Pride would answer shortly after, as junior Tulio Ribeiro (Itajuba, Brazil/Colegio Sagrado Coracao de Jesus) found freshman Alec Guarino (St. John, Ind./Marian Catholic), who connected on a goal from the right side of the box in to the left side of the goal to even the score at 1-1.

Both teams would remain scoreless for the rest of the first half with the game tied at one goal apiece.

Texas Wesleyan would score what would be the game winning goal in the 53rd minute of the second half, thanks to a goal from Kian Hosseinpour.

The Pride return to action Tuesday, Aug. 30, when they travel to Marian University for a nonleague contest at 2 p.m CT.