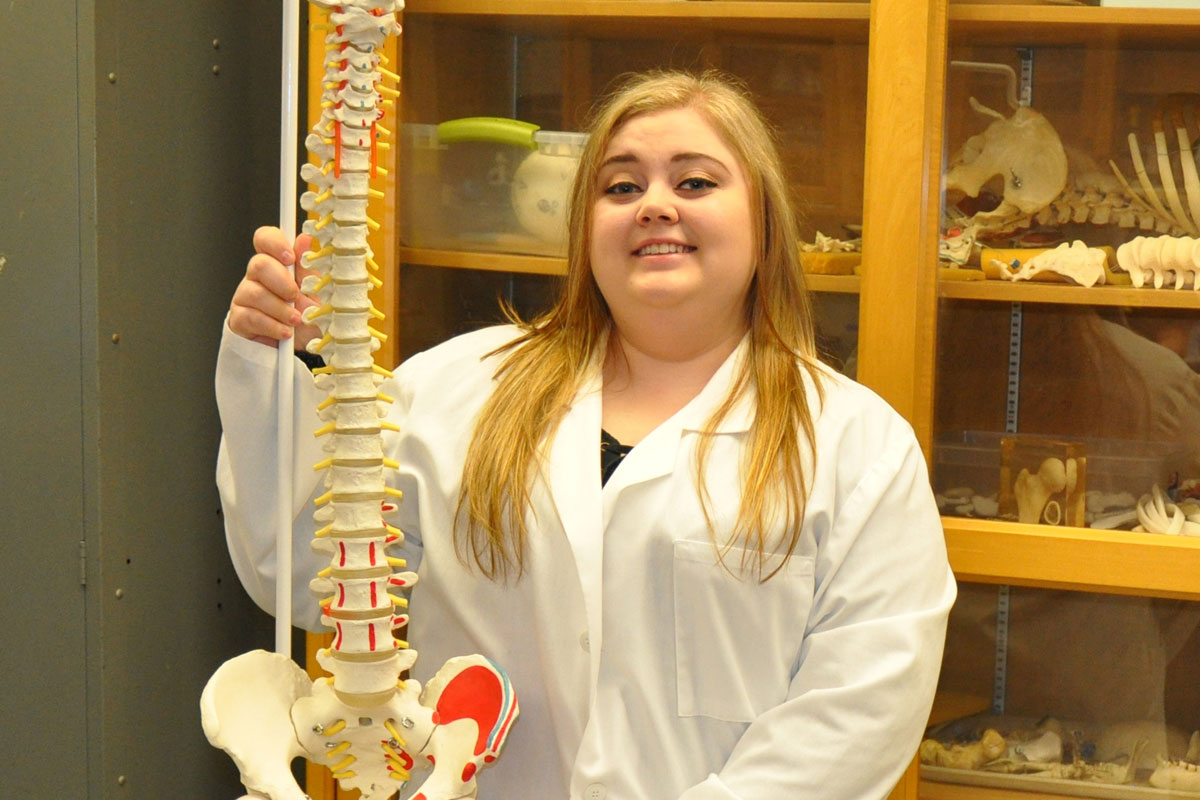 Melissa Duvall looks forward to earning her bachelor’s degree during the Purdue University Northwest Commencement Exercises Monday (5/8) on the Westville Campus. She will have little time to relax afterward before packing up her belongings to continue studies at Palmer College of Chiropractic to pursue a career that she was introduced to in a PNW class.

Duvall, a Portage resident, enrolled at PNW to pursue a bachelor’s degree in nursing. Her mother had earned her degree in nursing at the Westville Campus, so it seemed natural for her daughter to follow. But taking Anatomy & Physiology I, instructed by Clinical Assistant Professor of Biology Scott Simerlein, inspired a new calling.

Finding her true calling
“I finally discovered my true passion.” Duvall explained. “Chapter after chapter I was captivated by the wonders of human anatomy and its remarkable physiology. This entity in which my mind is contained has so much more power than I could have imagined. Never had I encountered anything so complex and beautiful as the human body.”

She spoke to Simerlein about her desire to pursue a career working with the human body, admitting she was dismayed by “learning about thousands of drugs that are used to confuse the body and hide problems instead of fixing what is wrong.”

Her grades earned her placement on the academic honors lists for most of her eight semesters at PNW.

Her campus experience
Duvall excelled in anatomy and physiology classes, so Simerlein asked her to serve as a supplemental instructor in 2015.

“I was thrilled to assist in teaching the next round of students about the amazing human body. Being part of the anatomy and physiology classes for an additional year enhanced my knowledge as well,” she said.

During her final year on campus, she has been an Anatomy and Physiology undergraduate teaching assistant.

In addition, Duvall volunteered to help with the “Cadaver Palaver” program, which introduces students from area schools to the PNW cadaver labs.

Simerlein; his sister, Mitzi Simerlein, a doctor of chiropractic who teaches at Ivy Tech; and even their mother have spoken to the club about the profession and running a professional practice.

Support of family and friends
“I am very grateful to have a very supportive family,” Duvall said. “My mom, dad and brother have always been there for me. My boyfriend, Ron, knows how to keep me laughing. Dr. Simerlein always has encouraged me and has been a tremendous mentor. I cannot thank him enough for all he has done for me.”

An amazing school
“PNW is an amazing school,” Duvall said. “I have had remarkable professors who care about their students as individuals. They make themselves available to students and ensure that you understand the topics they are teaching. My professors challenged my mind in countless ways. I became a well-rounded person because of them. I look forward to becoming a doctor of chiropractic (D.C.) and being Melissa Duvall, D.C.”