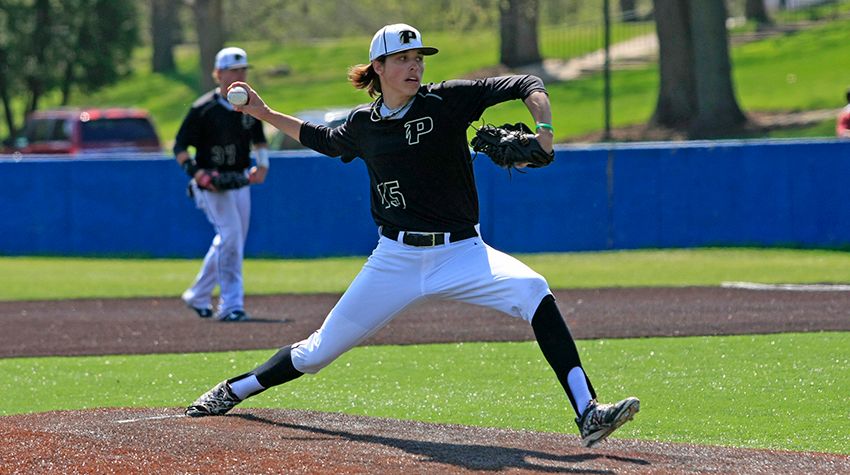 Peregrines Split Doubleheader with Aquinas
Purdue Calumet would play some small-ball in the bottom of the fifth, after a sac bunt by Cole Garcia (Anaheim Hills, Calif./Canyon) advanced Drake Larriuz (Lake Villa, Ill./Lake Community), who singled in the at-bat prior, to second base.

Junior Tyler Crussen (Valparaiso, Ind./Wheeler) would follow in Garcia’s footsteps with a bunt of his own, which helped score Larriuz after a throwing error from the pitcher to give the Peregrines a 2-1 advantage.

Hard-throwing right-hander Matt Sandoval (Highland, Ind./Bishop Noll) would shut down the Saints for the rest of the game, leading to Purdue Calumet’s fourth-straight win on the year.

Aquinas would score the lone run of the game in the first inning, after Patrick Giddings crossed home on a defensive error from the Peregrines.

The Black and Gold struggled offensively, after Michael Olshinsky pitched a complete game, 4-hit shutout to give the Peregrines their first loss of the season.

Lefty southpaw Josh Arnold (Lowell, Ind./Lowell) pitched well in his first career start with the Black and Gold, pitching six innings and striking out four without giving up an earned run.

Mike Priest led Aquinas offensively, batting 2-for-3 at the plate, while Eric Sickles (Benicia, Calif./Benicia) connected for two of the four Peregrine hits in the game.

Purdue Calumet Women's Basketball National Tournament Preview
The No. 21 Purdue University Calumet women's basketball team, who is making their third NAIA Tournament appearance in four years, will travel to Sioux City, Iowa to take on the No. 12 Mount Mercy Lancers Thursday for the first round of the NAIA Division II National Championships.

SEASON RECAP
The No. 21 Purdue University Calumet women’s basketball team finished 22-8 overall and 13-6 in the Chicagoland Collegiate Athletic Conference. This season marked the fifth consecutive 20-plus win season for ninth-year Head Coach Tom Megyesi. The Peregrines recorded five wins against teams that were in the NAIA Top 25 or receiving votes, including a 80-60 victory against then-ranked No. 5 Indiana Wesleyan Nov. 6 and a 54-53 thriller against then-ranked #9 Cardinal Stritch Jan. 9. Of Purdue Calumet’s eight losses, seven came in conference play, with the other a setback to then-ranked No. 17 Huntington.

The Peregrines earned a six-seed in this year’s field after capturing the eighth at-large spot.

NAIA TOURNAMENT
The Peregrines’ berth marks the third national berth for the women’s team in the last four seasons and the first trip to Sioux City (Iowa) since the Peregrines earned an automatic bid in 2013-14, after capturing both the CCAC regular-season and tournament titles. That season, Purdue Calumet won its first-ever tournament game en route to a spot in the Sweet Sixteen. The Peregrines defeated Oregon Tech, 83-75, before losing to national runner-up Davenport (34-2).

Purdue Calumet made its first NAIA nationals appearance under ninth-year Head Coach Tom Megyesi in 2012-13, when the Peregrines earned an at-large bid after finishing the regular season 21-9. Purdue Calumet lost in the first round, falling to No. 19 Grand View (Iowa), 58-44.

The only other national tournament berths in program history came during the 1995-96 season, when Purdue Calumet finished 27-5 under head coach Gary Hayes, and 1982-83 season, under Head Coach Bill Platt.

LAST TIME OUT
The Peregrines last played in a 117-104 loss at then-No. 7 Olivet Nazarene in the CCAC tournament quarterfinals Feb. 23. Cassidy Deno (Otterbein, Ind./Benton Central) led the Peregrines with 33 points, Darien Thompson (Anderson, Ind./Anderson) added 26 points and Katie Wampler (Scottsburg, Ind./Scottsburg) picked up her fifth double-double of the season, scoring 21 points and pulling down 17 rebounds. The Tigers, ranked No. 4 in the final NAIA Division II Coaches’ Poll, would go on to capture the CCAC Tournament Championship and earn a No. 1 seed in the NAIA Tournament field.

The Lancers are ranked third in the country in total 3-point field goals made (314) and sixth in 3-pointers made per game (9.8), led by Kneeland, who ranks fifth individually with 111 (3.5 per game). Like the CCAC, the GPAC had six teams make the national tournament, as Mount Marty joins regular-season champion and No. 1 Morningside, No. 10 Dakota Wesleyan, No. 15 Briar Cliff, No. 16 Concordia, and No. 22 Hastings in this year’s field.

LOOKING AHEAD
Should Purdue Calumet advance, the Peregrines will face the winner of 2-seed College of Ozarks (Mo.) and 7-seed Friends on Friday, March 11, at 8:45 p.m. The National Championship is set for Tuesday, March 15, at 7:04 p.m. and will be streamed live on ESPN3.

POSTSEASON HONORS
Cassidy Deno was named Purdue Calumet’s third CoSIDA Academic All-American in school history back in February. Deno is averaging 19.1 points per game for the Peregrines, which ranks third in the Chicagoland Collegiate Athletic Conference. She adds 6.7 rebounds, 2.2 assists, 1.6 steals per game and has been lethal from 3-point range, where she shoots 41.0 percent with 178 makes on the year. Deno adds a 88.2 percent clip at the free-throw line (142-161) and shoots 42.4 percent from the field in 30 starts on the season.

Deno was also named to the All-CCAC First-Team, while sophomore teammate Katie Wampler was named a honorable mention selection. Wampler earned her first-ever league honor after a breakout year when she averaged 11.7 points, a team-high 7.8 rebounds and 1.6 steals per game while shooting 52.0 percent (119-of-229) from the field. The sophomore recorded five double-doubles on the year, including a 21-point, career-high 17 rebound effort in the Peregrines’ CCAC Tournament loss to No. 7 Olivet Nazarene.

LIVE LOOK
Live video and stats will be available for purchase through the NAIA for Thursday's NAIA tournament matchup at http://portal.stretchinternet.com/naia/. Single-session video is $9.95 can be paid by credit card.

TICKETS
Tickets to games and the Opening Banquet are available at tysoncenter.com. For assistance, call (712) 279-4850.

Tickets to the Opening Banquet may also be purchased at the event, if available. Guests will be seated at tables reserved for general public.