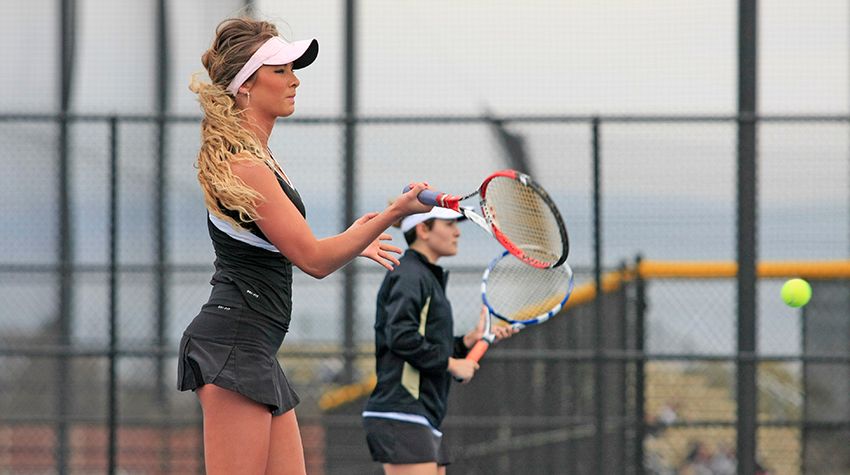 The Peregrines (3-2) and Cardinals (8-5) opened the match at Dowling Park’s Community Hospital Tennis Complex before rain forced the teams to finish competition at MatchPoint Tennis Club.

Senior Lori Haas (Bismarck, Ill./Bismarck-Henning) and sophomore Kasey Kulesa (Munster, Ind./Munster) led the way for Purdue Calumet in singles play. Haas defeated NCC’s Katie Drone in a three-set contest at No. 1 singles, bouncing back from a 4-6 loss in the first set before taking Sets 2 and 3, 6-1, 10-3.

Kulesa won her No. 4 singles match in straight sets, defeating NCC’s Marisa Coladipietro by scores of 6-1, 7-5.

Kulesa and No. 2 doubles teammate Abby Kvachkoff (Crown Point, Ind./Crown Point) won the Peregrines’ lone match in duo play, defeating the Cardinals’ pair of Drone and Kassandra Bernado, 8-4. Kvachkoff also had a battle at No. 3 singles, losing the first set, 6-0, bouncing back for a 7-5 win in Game 2, before falling in the third, 10-3.

Purdue Calumet returns to action Saturday, when the Peregrines host Chicagoland Collegiate Athletic Conference foe Cardinal Stritch – along with the men’s teams – in a 11 a.m. contest at Dowling Park.

“Olivia is a versatile and powerful attacker who can impact our offense,” Wiejak said of Simpson.

“She will also make contributions to our defense with her aggressive attitude on the floor."

Simpson, a member of the Club 1 volleyball club, was also a multi-year letter winner for Bolingbrook High School.

The 5-foot-9 outside hitter is a member of the National Honor Society and is a Student Ambassador.

Simpson was also a three-year letterwinner for BHS’s softball team, which captured their first regional championship in school history.

The daughter of Eric and Lonnie Simpson, Olivia plans to major in Psychology in the fall.

Purdue Calumet finished 11-23 overall in 2015 in the final season before combing with Purdue North Central. The Purdue Northwest volleyball team will take the court for the first time in 2016-17.