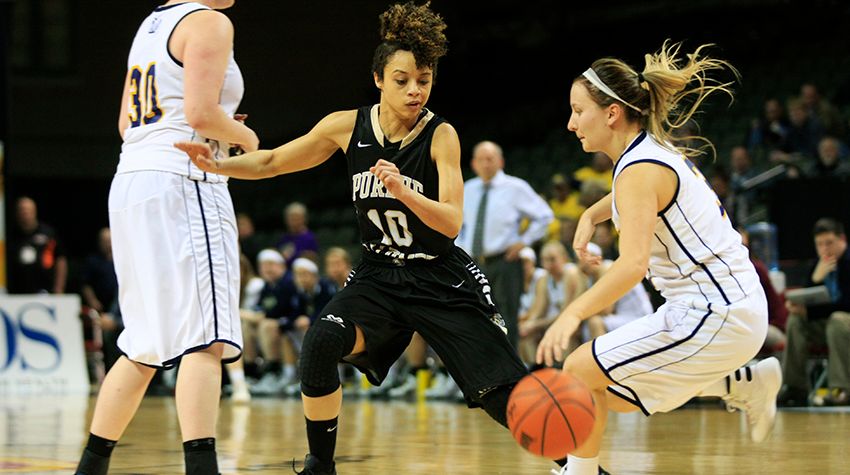 Pagan Fires Program's First No-Hitter, Sardella Walk-Off Single in Purdue Calumet Win
The Purdue University Calumet softball team saved its best performance for last Thursday on its Florida trip, as sophomore Holly Pagan tossed the program’s first career no-hitter and Olivia Sardella came up with the walk-off single to lift the Peregrines to a 1-0 win over No. 22 Bellevue (Neb.).

The Peregrines fell to Cornerstone (Mich.) earlier in the day, 4-2, as Purdue Calumet (5-9) finished its Florida road trip with a 4-8 record. Purdue Calumet returns to action Sunday, March 20, with a home-opening doubleheader against Viterbo (Wis.) at Dowling Park’s Fifth Third Bank Field.

GAME 2: Purdue Calumet 1, No. 22 Bellevue 0
Sophomore Holly Pagan (Bartlett, Ill./Bartlett) recorded her first career no-hitter with a masterful performance in a 1-0 shutout win over 22nd-ranked Bellevue, as the right-hander finished the game with eight strikeouts and zero walks.

Freshman Olivia Sardella (Dyer, Ind./Lake Central) was the game’s offensive hero, as the catcher connected on an RBI-single in the bottom of the seventh inning to score pinch runner Emily Cole (Frankfort, Ill./Lincoln Way North) from second base and give the Peregrines’ the walk-off victory. Pagan, though, helped her own cause by doubling with one out to set up Sardella’s key hit.

Sardella finished the game 2-for-3 and added a triple in the second inning, and teammates Hannah Lopez (Granada Hills, Calif./Bishop Alemany) and Jess Loy (Skokie, Ill./Niles North) added singles to round out the Peregrines’ offense in a five-hit game.

After a scoreless first frame, Cornerstone would record the first run of the game in the second inning after a home run from Elizabeth Albaugh gave the Golden Eagles a 1-0 advantage.

The Peregrines would even the score in the bottom half of the fourth, thanks to an RBI-single from Allyson Leach (Demotte, Ind./North Newton) which plated Alex Morales (Bartlett, Ill./Bartlett).

In the top of the fifth inning, Alexsandra Szajna belted a three-run homer to take back the lead for Cornerstone, 4-1.

After a single from Tessa Steffens (Litchfield, Ill./Litchfield) followed by a double by Olivia Sardella (Dyer, Ind./Lake Central) started off the bottom of the sixth, Holly Pagan (Bartlett, Ill./Bartlett) would ground out to first to score Steffens and cut their deficit to two, 4-2, entering the seventh inning.

The Golden Eagles would stop a comeback effort from the Black and Gold in the bottom of the final frame and come away with the 4-2 win.

Junior guard Darien Thompson (Anderson, Ind./Anderson) led the Peregrines scoring efforts with 25 points on 7-of-12 shooting including a trio of trifectas, while Cassidy Deno (Otterbein, Ind./Benton Central) notched a double-double, scoring 23 points and pulling down 11 rebounds.

Alex Kneeland led all scorers for Mount Marty, scoring 34 points on 10-19 shooting with five three-point field goals and Raquel Sutera rounded out the Lancer scorers with 14 points while bringing in nine rebounds.

A full recap for tonight’s contest will be available shortly at Purduecalsports.com

#21 Purdue Calumet Edged in NAIA First Round in 73-69 Loss to #12 Mount Marty
The No. 21 Purdue University Calumet women’s basketball team battled No. 12 Mount Marty (S.D.) down to the wire in a back-and-forth contest that saw the Lancers get the edge in a 73-69 loss in the First Round of the NAIA Division II National Championships Thursday in Sioux City’s Tyson Center.

Junior guard Darien Thompson (Anderson, Ind./Anderson) led the Peregrines (22-9) with 25 points, pumping in 17 in the first half to finish 7-of-12 from the field. Classmate Cassidy Deno (Otterbein, Ind./Benton Central) added 23 points, 11 rebounds and three steals for her sixth double-double of the season and sophomore Katie Wampler (Scottsburg, Ind./Scottsburg) had 15 points and nine boards in the loss.

“I’m very proud of my team and I’m proud of their effort and their sportsmanship.”

With 57 seconds to play and the Peregrines’ trailing by five, 71-66, Thompson drained a triple from the corner to cut the Lancers’ (23-10) lead to two, 71-69. Purdue Calumet was able to get the stop on the ensuing possession, but couldn’t come up with the bucket in the final seconds. Mount Marty senior guard Alex Kneeland, who finished with a game-high 34 points – would then seal the win with two makes at the charity stripe.

The Peregrines struggled from the field to start the game, but made up for any first-quarter jitters by staying aggressive in drives to the bucket and getting to the free-throw line, where they were a perfect 8-of-8. Thompson’s focus was evident, as the point guard made 7-of-9 free throws in the first half and was 4-of-6 from the field with two makes from beyond the arc.

“She’s a gamer, she’s a tough kid, she’s a junior, and she did a great job for us,” Megyesi said of Thompson. “She’s a great floor leader and she’s going to be huge for us (next year).”

Sixth-seeded Purdue Calumet caught fire in the second frame, outscoring the No. 3 seed Lancers 24-14 to take a 40-36 lead at halftime, as a Wampler three-point play and back-to-back treys by Deno and Thompson keyed the Peregrine run.

Mount Marty’s offensive rebounding (the Lancers had 18 compared to three offensive boards for the Peregrines) and 3-point shooting it in the game, however, as the Lancers outscored the Peregrines 19-14 in the third quarter to take a one-point lead, 55-54, heading in the fourth.

Mount Marty advances to the Sweet Sixteen, where the Lancers will face the winner of College of Ozarks (Mo.) and Friends (Kan.) Friday at 8:45 p.m. CT.