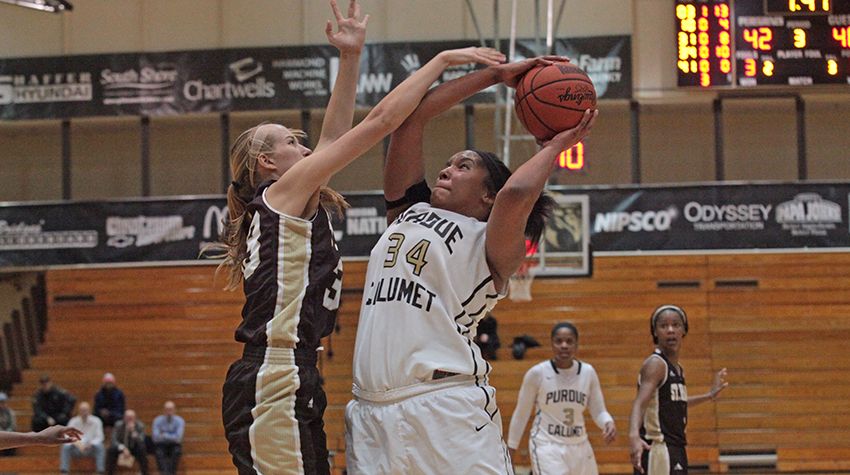 #7 St. Francis Pulls Away Late to Top #16 Purdue Calumet, 76-60
The No. 16 Purdue University Calumet women’s basketball team made a third-quarter surge to get within two points, but visiting No. 7 University of St. Francis (Ill.) pulled away late for a 76-60 league win Tuesday.

The Peregrines cut the Fighting Saints (14-1, 6-0) lead to 48-46 after two back-to-back McBee layups with 57 seconds left in the third, but that’s as close as the host would get to USF, who never trailed.

St. Francis opened the game on a 14-4 run, but Purdue Calumet fought back in the first frame behind a Buggs triple, Darien Thompson (Anderson, Ind./Anderson) steal and layup and a pair of Wampler free throws to make it 16-12 at the 3:12 mark. After the Saints ended the first quarter up, 20-17, they extended their lead back to 10, 29-19, after two fastbreak layups from Charnelle Reed and Kamari Jordan.

A Deno jumper stalled the run, as she went on to drain another shot in the paint and 3-pointer from the wing, setting up a McBee layup that cut the Saints’ lead back to just three, 31-28, with 3:39 left in the half. The Saints ended the second quarter on a 7-2 run to head into the locker room with a 38-30 lead.

In the third, McBee scored 10 of her 14th points to net 1,000 for her career, making her the 19th player in Purdue Calumet women’s basketball history to do so. She currently stands 19th with 1,003 points.

Two unanswered layups by the Saints’ Reed and Christina Ehkomu, however, ended the third and sent USF up, 52-46, with 10 minutes left. Alexis Brown opened the fourth quarter with a triple and Reed hit another jumper to push the advantage to 11, 57-46, as Purdue Calumet would get no closer than nine the rest of the way.

Reed finished with 25 points and 11 rebounds and Angelica Osusuky added 12 points to lead the Saints, who remain unbeaten in conference play.

The home team capitalized most from the free-throw line, hitting 14-of-18 (77.8 percent), compared to USF’s 1-of-5 performance at the stripe. Purdue Calumet also edged USF on the boards, 41-40, but committed 17 turnovers to the Saints’ nine.

Purdue Calumet returns to action Saturday, Jan. 9, when the Peregrines host another NAIA Top 20 matchup against No. 9 Cardinal Stritch. Game time is set for 1 p.m. CT at the Fitness and Recreation Center.

The Peregrines (7-10, 1-8 CCAC) were led by LaBradford Sebree (Kokomo, Ind./Kokomo) who notched a team-high 17 points including a trio of three-point field goals, while senior Ryan Rader (Lombard, Ill./Willowbrook) scored 14 points and brought down eight rebounds.

Purdue Calumet would answer with an 8-0 run of their own to get within one, thanks to a pair of long range shots by Sebree and Max Clifford (Franklin, Ind./Roncalli).

St. Francis would gain some ground on the Peregrines toward the end of the half, but the Black and Gold wouldn’t back down, heading in to the locker room down six, 31-25.

The Fighting Saints would try and brake open their lead, but the Peregrines would continue to answer runs by St. Francis, getting as close as three points on a deep three by Daulton Albanese (Lancaster, Ohio/Lancaster) with the shot clock expiring to make it 42-39 with just over 12 minutes remaining.

With five minutes left a pair of free throws by Jake Raspopovich put the Fighting Saints up 13, 58-45.

Much like the story for the entire game, the Black and Gold closed out the game hard, getting within five points, 60-55, before falling to the No. 2 Fighting Saints 63-55.

The Peregrines won the battle of the boards, out rebounding the Fighting Saints 33-25, while Saint Francis recorded 20 points of Purdue Calumet turnovers.

The Peregrines will be back in action on Saturday, Jan. 9, when they host Cardinal Stritch in a CCAC contest at 3:00 p.m. (CT).