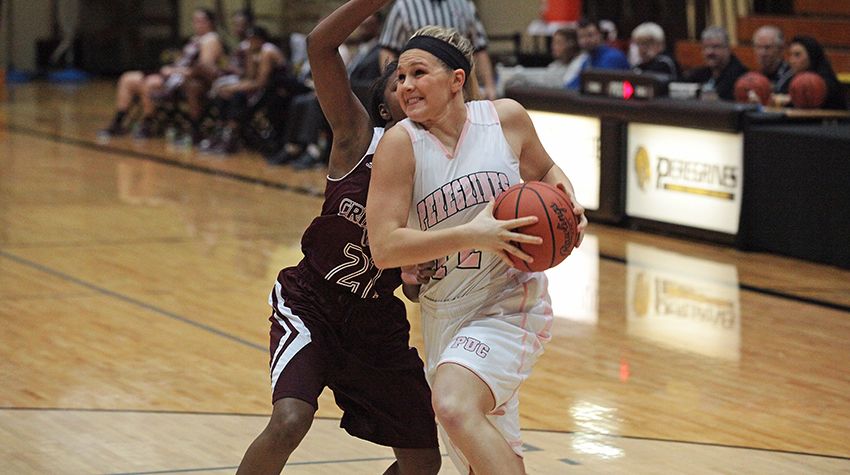 Sophomore Ellie Michalski (Mukwonago, Wis./Mukwonago) scored 10 points and was a perfect 4-for-4 at the free-throw line to round out the Peregrines’ leaders.

Brittni Kisul led the Crimson Wave with 11 points and teammate Geena Locicero added eight points and 12 boards in the setback.

The win marked the 10th-straight win over Calumet College for Purdue Calumet, who leads the all-time series, 23-4.

Purdue Calumet returns to action Saturday, when the Peregrines travel to Chicago to take on CCAC foe Roosevelt University.

The Peregrines (9-13, 3-11 CCAC) were led by LaBradford Sebree (Kokomo, Ind./Kokomo), who notched 22 points and six rebounds while Ryan Rader (Lombard, Ill./Willowbrook) scored 14 points and Chandler Spring (Covington, Ind./Covington) had 11 points on 3-of-6 from beyond the arc.

A balanced scoring effort carried the Crimson Wave in the first half to a double-digit lead, heading in to halftime with a 35-18 lead over the Black and Gold.

The Peregrines stepped it up in the second period, cutting their deficit to seven points, 47-40, after a Marquette Muhammad (Chicago, Ill./Crete Monee).

Purdue Calumet would continue their comeback efforts, after a three-point field goal from Dayvohn Braxton (Indianapolis, Ind./Lawrence North) made it 51-49 in favor of the Crimson Wave with just under seven minutes remaining.

CCSJ would try to extend their lead in the final minutes, but another trifecta from Spring kept the Black and Gold within 2, 60-58, with 2:15 left in the game.

The Peregrines would miss some crucial free throws as the game winded down, with the Crimson Wave hanging on to come away with the 64-60 victory.

Josh Freeman led CCSJ with 15 points on 5-of-10 shooting while Michael Brooks notched 11 points to lead the Crimson Wave.

The Peregrines return to action Saturday, Jan. 30, when they travel to Chicago, Ill. to take on Roosevelt University at 3:00 p.m. (CT).