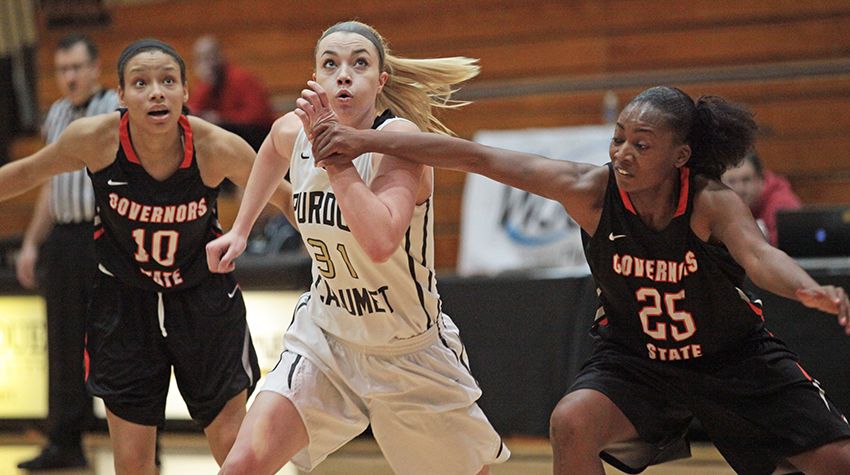 Purdue Calumet Cruises to 73-49 Win Over Governors State Wednesday
Katie Wampler had a career-high 15 rebounds to go along with her team-best 18 points to lead the No. 16 Purdue University Calumet women’s basketball team to a 73-49 nonleague victory over visiting Governors State University Wednesday.

Wampler (Scottsburg, Ind./Scottsburg) finished 6-of-14 from the field and snagged 11 offensive boards to go along with four steals to lead the Peregrines, who improve to 16-5 overall with the victory. Senior Jada Buggs (Elkhart, Ind./Elkhart Memorial) added 15 points and and eight rebounds and juniors Cassidy Deno (Otterbein, Ind./Benton Central) and Dariyan Morris (Merrillville, Ind./Merrillville) added nine points each for Purdue Calumet.

Utilizing their bench in the second half, the Peregrines extended their lead to 51-35 entering the fourth quarter. Purdue Calumet’s largest lead came after the Peregrines enacted a 22-7 run down the stretch to take a 28-point advantage (73-45) on a Buggs free throw with 1:55 to play.

Purdue Calumet used the 3-point shot in the second half to pull away, as the Peregrines drained five after just 2-of-12 shooting in the first half. Freshman Kaylee Hardy (Saranac, Mich./Saranac), sophomore Alexis Johnson (Portage, Ind./Portage) and freshman Michaela Kikendall (Morristown, Ind./Morristown) each drilled triples in the second half for the host.

Kanitral Averhart had 13 points and Achuynnua Robinson added 11 points for the Jaguars, while Raven Phillips had 11 boards and Zaporia Smith had 10 rebounds.

The Peregrines return to action Saturday, when they hit the road for a nonleague contest at Rochester College (Mich.) Saturday. Purdue Calumet returns home on Wednesday, Jan. 27, when it hosts Calumet College of St. Joseph in Chicagoland Collegiate Athletic Conference action.

Strong Second Half Performance Lifts Peregrines Past Panthers
After trailing 48-41 with 9:21 remaining in the second half, the Purdue University Calumet men’s team battled back to take down Purdue North Central 66-60 in a Chicagoland Collegiate Athletic Conference showdown Wednesday night.

The Panthers would regain and keep their lead for the rest of the half, after Shereff Knight and Mike Martin notched 20 points for PNC in the first 20 minutes of play to give them a 34-27 lead heading in to the break.

Purdue Calumet came out of the locker room strong, quickly taking back the lead on a Sebree layup which made it 41-39 with 14:09 remaining.

The Panthers halted a Peregrines run with one of their own, rattling off nine straight points to go ahead 48-41.

With 4:50 left in the game and the Panthers leading 57-52, the Black and Gold would fight back thanks to an 11-0 run led by Chandler Spring (Covington, Ind./Covington), who notched seven points in just over three minutes to put the Peregrines ahead 63-57.

PNC outrebounded Purdue Calumet 38-34, but the Peregrines caused 15 turnovers and scored 22 points off those miscues, which proved costly for the Panthers.

The Peregrines return to action next Wednesday, Jan. 27, when they host Calumet St. Joseph at 7:00 pm. (CT)

The 5-foot-11 forward averaged 16.7 points per game and 6.0 rebounds per game in her junior season, while garnering third-team All-State, KPC All-Area and NHC First-Team All-Conference accolades.

“Skylar is an excellent post player with outstanding post moves,” head coach Tom Megyesi said. “She is very athletic and an outstanding student. We look forward to Skylar joining the program next fall.”

The Peregrines are currently 16-5 overall and are ranked No. 16 in the latest NAIA Division II Coaches Poll.

The daughter of Tara and Tim Ostrowski, Skylar plans to major in nursing next fall.

“The word super-utility applies to Evan, “ head coach Dave Griffin said. “ He is a very coachable and knowledgeable player who can play anywhere on the field.”

“Evan’s a quintessential student-athlete, and we look forward to having him join us in the fall.”

Frank is a member of the Bulldog squad who were 2015 Duneland Athletic Conference co-champions.

He also is a decorated tennis player for the Bulldogs, earning All-State Honorable Mention, All-District and All-Conference honors.

The two-year letterwinner for the tennis program led Crown Point to back-to-back conference and sectional championships and was a semi-state qualifier in his sophomore season.

The son of George and Jackie Frank, Evan plans to major in finance when he joins Purdue Calumet next fall.