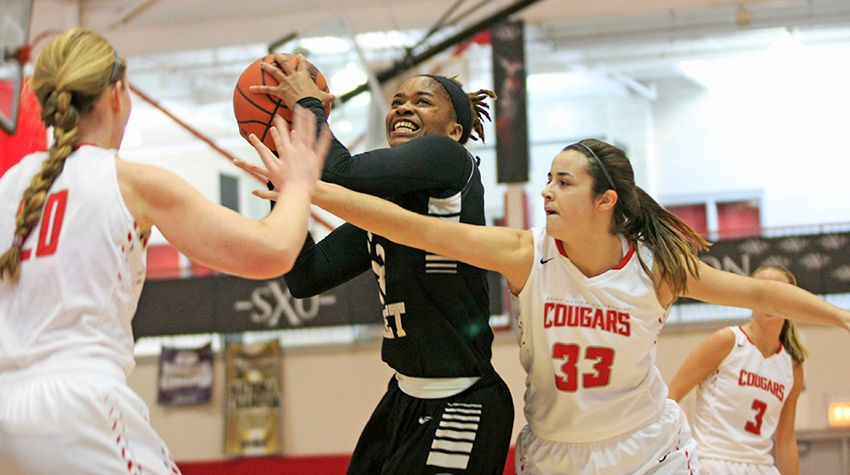 No. 16 Purdue Calumet Falls at No. 2 St. Xavier, 82-67
The No. 16 Purdue University Calumet made several runs in the second half, but host and No. 2-ranked St. Xavier answered every one in the Peregrines’ 82-67 league setback Saturday.

The Cougars, who spent time as NAIA Division II’s No. 1 team for a period this season, jumped out to an early lead, outscoring the Peregrines 24-9 in the first quarter. Purdue Calumet, who had both Deno and Buggs in foul trouble for most of the second quarter, was able to chip away at the lead thanks to 10 first-half points from Morris, who made 6-of-6 from the free throw line in a half where the Peregrines shot just 23.3 percent (7-of-30) from the field.

The Cougar opened the second half up hot, leading by as many as 21, 56-35, with 5:12 left in the third. But the Peregrines didn’t quit, as a Buggs’ layup kicked off a 12-0 run to cut that lead to nine, 56-47, with 41 seconds left in the frame. Buggs had four points, Katie Wampler (Scottsburg, Ind./Scottsburg) drained a triple, Thompson connected on a layup and Ellie Michalski (Mukwonago, Wis./Mukwonago) and Deno hit a pair of free throws during the run.

SXU responded with a run of its own though, outscoring the Peregrines 5-0 in the final minute to take a 14-point lead into the fourth quarter. That lead ballooned back to 17, 66-49, with 8:20 left, but Purdue Calumet had one more run, as the Peregrines used a mini 5-0 run by Deno to get within nine once more at 70-61 before the Cougars held on down the stretch.

SXU edged the Peregrines on the boards, 42-38, while both teams committed 20 turnovers each.

Purdue Calumet returns to action Wednesday, when the Peregrines host Governors State in a nonleague contest at the Fitness and Recreation Center. Game time is set for 5 p.m. CT.

SXU’s leading scorer Larry Motuzis would take over in the next ten minutes, connecting on four three-point field goals to break open the Cougars lead to 34-14.

The Black and Gold would finish the half strong, cutting their deficit to nine points, heading in to the locker room down 36-27.

Purdue Calumet would start the second half just like they finished the first, fighting back to get within four points, after a Marquette Muhammad (Chicago, Ill./Crete Monee) free throw made it 43-39.

Tony Core and Motuzis led another Cougars one later in the half, as SXU took extended their lead to 20 points, 69-49, with just over five minutes left in the game.

SXU would hold on to a double-digit lead for the remainder of the contest to take a 78-62 win over the Black and Gold.

Motuzis led all scorers with 26 points while shooting 6-for-10 from beyond the arc.

The Cougars out rebounded the Peregrines 33-31, but the Black and Gold won the battle down low, outscoring the Cougars 38-33 from inside the paint.

The Peregrines return to action Monday, Jan. 18, when they host Great Lakes Christian College in a non-conference contest. Tip-off is set for 5:00 p.m. at the Fitness and Recreation Center.