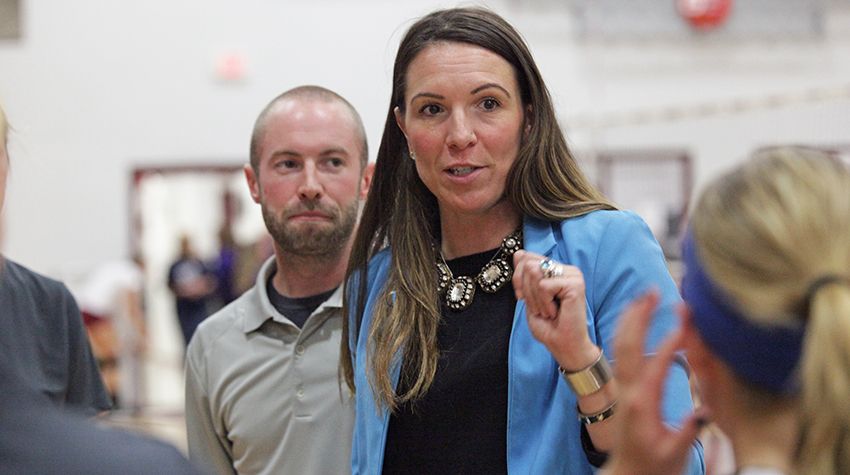 "Purdue Calumet volleyball has shown tremendous strides under the leadership of Julie Wiejak," Costello said. “Julie has unmatched enthusiasm and energy and a strong commitment to both academic and athletic success, and I look forward to her growing Purdue Northwest volleyball.”

Added Tom Albano, Purdue Northwest Associate Director of Compliance-Designate: “We are very excited for what women’s volleyball can be as Purdue Northwest. We have a group of very talented student-athletes coming together coupled with Julie’s energy and passion to succeed at this next level."

In addition, 11 individual single-season records were broken since the program was reintroduced in 2010, led by two-time Chicagoland Collegiate Athletic Conference Second-Team selection Gabrielle Martin, who finished 2015 ranked 26th in the NAIA and first in the CCAC in total aces with 55.

While Purdue Calumet continued to improve on the court, the Peregrines showed growth outside of the gym under Wiejak by earning the CCAC”s Champions of Character Team award, as the volleyball team volunteered for countless community service projects, such as the Ann & Robert H. Lurie Children's Hospital of Chicago’s Move for the Kids 5K/Walk Run and Purdue Calumet’s R-Dub Club, a reading-centered project in coordination with local Hammond elementary schools. The Peregrines also hosted its a “Pale is Love” game in 2015, a melanoma awareness event to help spread the dangers of ultraviolet ray exposure and how to prevent the disease.

In the classroom, Purdue Calumet has had two NAIA Daktronics Scholar-Athletes, six CCAC All-Academic selections, three players on the school’s Dean’s List, and the squad was named an NAIA Scholar-Team in 2014-15 after recording a 3.13 team grade point average under Wiejak’s leadership.

"I am honored to be named the volleyball coach for Purdue Northwest," Wiejak said. "I'd like to thank Chancellor Keon and Chancellor Dworkin, as well as Rick Costello and Tom Albano for believing in me. I know that under their leadership, Purdue Northwest athletics will continue to thrive and I'm excited to show student-athletes what we have to offer.

"I look forward to making Purdue Northwest volleyball a powerhouse in the Midwest."

Prior to Purdue Calumet, Wiejak spent three seasons as head coach for Andrean High School, leading the 59ers to an impressive 85-22 record, including the program’s first two IHSAA Semi-State appearances. There, she coached seven all-conference selection, five all-area honorees and one NWI Times All-Area Player of the Year. Wiejak also served as the head coach of the St. Patrick’s (Ill.) boy’s volleyball coach in 2012 and 2013, leading the team within a game of the state tournament.

In addition to her high school coaching duties, Wiejak was active in the club volleyball ranks. She spent three years as the director of the Southshore Volleyball Club, while also serving the director of coaching development and fundraising for Powerhouse Sports Academy, the parent organization of SSVBC as well as Powerhouse VBC, Club 1 VBC, and Hardcross VBC.

Prior to her time at Andrean, Wiejak served as the top assistant for four seasons at her alma mater, NCAA Division I Loyola University. She worked primarily with the Ramblers’ middle blockers. Her coaching experience also includes a six-year stint as an assistant coach at DePaul. While in Lincoln Park, she involved with all aspects of the Blue Demons’ program, helping guide the program to its first NCAA Tournament appearance in 2001.

Wiejak was also the director of the Great Lakes Region High Performance Program, an extension of the governing body of USA Volleyball, coordinating camps and competitions while also handling the business and financial aspects of the program for the seven years it existed. In 2005, for her efforts within the USA Volleyball community, Wiejak was given the Robert L. Lindsay Meritorious Service Award, which recognizes individuals for contributing outstanding participation, motivation, and other services in the promotion of volleyball.

A member of the Positive Coaching Alliance, Wiejak was named one of organization’s the Top 50 Double Goal coaches in the nation. She was also nominated for Indiana’s 2011 AVCA National High School Coach of the Year, while being selected to the “Top 20 under the age of 40” class of 2012 by Northwest Indiana Times Business Magazine.

Wiejak had an impressive career at Loyola as a middle blocker, racking up 678 kills and 297 total blocks. She set a single-season record with 135 blocks as a junior, before notching notching 342 kills and 125 blocks en route to First Team All-MCC and MCC Tournament MVP honors as a senior. The Bishop Noll product led the Ramblers to the 1999 MCC title and a trip to the NCAA Tournament.

“Coach Beck has shown tireless commitment in increasing both the roster size and overall success of Purdue Calumet’s cross country teams in a short period of time,” Costello said. “Her work ethic on the recruiting front helped lead to the program’s first-ever national qualifier and we are excited about her continued leadership of Purdue Northwest cross country.”

“The sky is the limit for cross country at Purdue Northwest, especially with the traditionally talented crop of runners in NWI. Under Coach Beck, the Pride will take a leap towards becoming the region’s force to be reckoned with."

Beck recently completed her second season as head coach for both Peregrine programs in 2015, where she helped accomplish a program first: Purdue Calumet’s first-ever NAIA National Championships qualifier in junior Alex Cordova. Under Beck’s tutelage, Cordova has rewritten the record book en route to his 2015 Top-20 finish at the Chicagoland Collegiate Athletic Conference Championships, the best in school history. At the NAIA Championships, he placed 102nd overall out of 326 runners and set a new personal best 8-kilometer time of 26 minutes and 17 seconds.

The Peregrine men finished seventh at the CCAC title race, as the Peregrines boasted its largest roster in program history in 2015. Cordova’s cousin and teammate Salvador Cordova, wasn’t far behind, placing 22nd overall to just miss a spot in the national meet. The Purdue Calumet women completed their second season with a full roster, scoring in all eight meets en route to an 11th-place finish at the CCAC Championships in 2015.

Three of Beck’s recruits — Amanda Baker, Sara Kubas and Heather Kristensen — have recorded 5K times that rank in the Top 15 in program history.

In addition, Alex Cordova earned his second career CCAC Runner of the Week award and Justin Peterson and Cody Porter were both named to the CCAC all-Academic Team.

“First and foremost, I want to thank Chancellor Keon and Chancellor Dworkin along with Rick Costello and Tom Albano for giving me the opportunity to continue to lead the cross country programs for Purdue University Northwest," Beck said.

"There is nothing more that I want to do than to help student-athletes excel in the classroom and in their collegiate careers, much like this university has done for me. I am looking forward to connecting the two teams and getting to work in preparation for the Fall 2016 season as we compete as Purdue Northwest.”

In her first season in 2014, the men’s squad captured its best-ever finish at the 2014 CCAC Championships, placing fifth -- five spots higher than the Peregrines’ did the previous season. In the season finale, the Peregrine men saw six runners record sub-30-minute finishes, led by a pair of Top 25 finishes from Beck recruits and cousins, Alex Cordova (21st) and Salvador Cordova (25th).

The Cordova cousins both captured CCAC Runner of the Week honors -- the first in program history -- and went back and forth by breaking the 8-kilometer record five times before finishing the season tied with a then program-best mark of 26 minutes and 31 seconds. Both Alex and Salvador also captured two individual titles, as Alex crossed the line first at the Indiana East Red Wolves Regional Rumble and Salvador took home the title at the Crimson Wave Invite. Senior Kenneth Karrson was named an NAIA Daktronics Scholar-Athlete and joined Justin Peterson and Michael Buckman on the CCAC All-Academic Team, while the squad as a whole was named one of five NAIA Scholar-Teams with a 3.14 team G.P.A.

On the Peregrine women’s side, Purdue Calumet regained consistency by scoring in all eight meets in 2014 and 2015, highlighted by a second-place team finish at the IU-East Red Wolves Regional Rumble in 2014. Freshman Heather Kristensen also captured an individual title, crossing the line first at the Red Wolves Regional Rumble. The Peregrine women also captured the Chancellor’s Cup for the highest team grade point average in the athletic department, as members Christine Lewandowski, Ashley Ulanowski and Abigail Bondi were named to the CCAC All-Academic Team.

Under Beck’s watch, Purdue Calumet’s cross country teams also made a difference in the community, volunteering for both the Ann & Robert H. Lurie Children’s Hospital of Chicago’s Move for the Kids 5K Walk/Run, Leon’s World Fastest Triathlon, and both of Purdue Calumet’s own hosted races, the Fall Frolic 5K and the Spring Fling 5K.

Beck is an alumnus of Purdue Calumet, earning a bachelor’s degree in hospitality and tourism management in addition to a standout four-year career for the Peregrines women’s basketball team, where she stands third on the all-time scoring list with 1,686 points.

In addition to her cross country duties, Beck is also in her third season as the assistant coach for the nationally-ranked Purdue Calumet women’s basketball team, where she’s helped lead the Peregrines to two-straight 20-win campaigns and an appearance in the 2013-14 NAIA National Tournament after the team captured both the CCAC regular season and tournament championships.

A native of Mishawaka, Ind., she’s currently seeking her master’s degree in coaching and athletic administration through Concordia University Irvine.