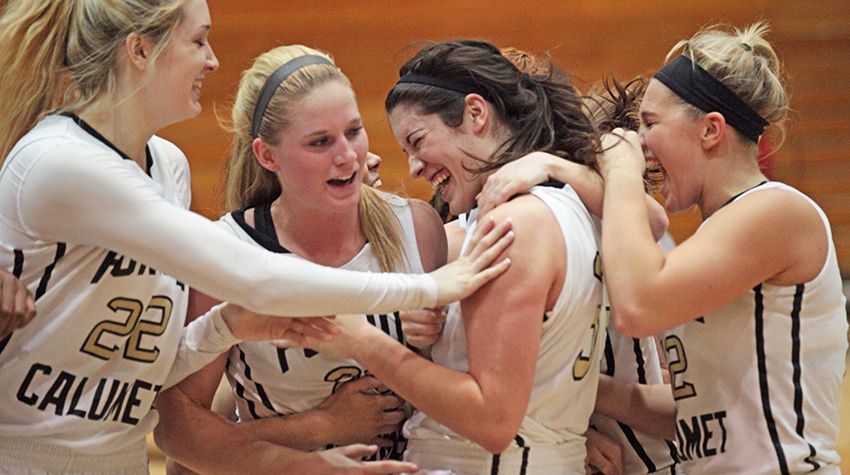 Down one, 52-53, with 11 seconds left, the an inside layup by the Peregrines wouldn’t fall, but Kiser (Noblesville, Ind./Noblesville) snagged the offensive rebound and was fouled on her shot attempt to send the sophomore to the free-throw line. The 53.3 percent free-throw shooter swished both out of the timeout to seal the second win this season over a Top-10 team.

Purdue Calumet opened the game strong, outscoring Stritch 24-12 in the first quarter behind 10 points from Deno, who finished 8-of-16 from the floor and 3-of-7 from downtown.

The Wolves fought back in the second frame, holding the Peregrines to just seven points as Purdue Calumet headed into halftime up just five, 31-26.

Stritch took its first lead on a Mika Passini triple with 4:33 to go in the third, to make it 37-35 in favor of the visitors. That lead pushed to as many as six, 46-40, on a Haley Ream jumper, but the Peregrines’ Ellie Michalski (Mukwonago, Wis./Mukwonago) answered with a jumper to make it 46-42 Stritch heading into the fourth.

With Stritch leading by four midway through the frame, a McBee three-point play gave the Peregrines life and cut the lead to one, 50-49, with 3:58 on the clock. Purdue Calumet tied it at 52-all on a Darien Thompson (Anderson, Ind./Anderson) free throw with 1:01 to play, but the Wolves responded by making 1-of-2 free throws to take a one-point lead, 53-52, with 11 seconds left.

McBee had a good look at a layup in the final seconds, but Kiser’s offensive rebound and ensuing free throws sealed it for the home team.

Passini led the Wolves with 16 points, Jenny Shernell had six points and 10 boards and Maranda Huibregtse added nine points and five assists to lead Stritch in the setback.

The Peregrines return to action Wednesday, Jan. 13, when they host CCAC foe Trinity Christian for a 5 p.m. CT contest at the Fitness and Recreation Center.

Purdue Calumet started the game with an 11-5 lead, thanks to back-to-back scores from Darric Obinger (Munster, Ind./Calumet Christian).

Stritch would answer the early run by the Black and Gold, knotting the game at 16-16 after three-point field goals from Billy Kirby and Matt Reinke.

Cardinal Stritch would break away from the Peregrines, after going on an 18-0 run midway through the period to go up 34-16.

The Wolves would lead by as much as 21 points late in the half, but the Peregrines would end the period on a 6-0 run to cut their deficit to 15, 43-28 heading in to the break.

Purdue Calumet would make some half-time adjustments and come out of the locker room strong, after a three-pointer by Daulton Albanese (Lancaster, Ohio/Lancaster) put the Peregrines within seven points, 54-47 with over 12 minutes remaining.

Stritch would go on to answer the Peregrines run, and keep a double-digit lead for most of the final 12 minutes, leading them to a 79-70 win over the Black and Gold.

The Peregrines return to action Wednesday, Jan. 13, when they host Trinity Christian in a CCAC matchup at 7:00 p.m. (CT) at the Fitness and Rec Center.