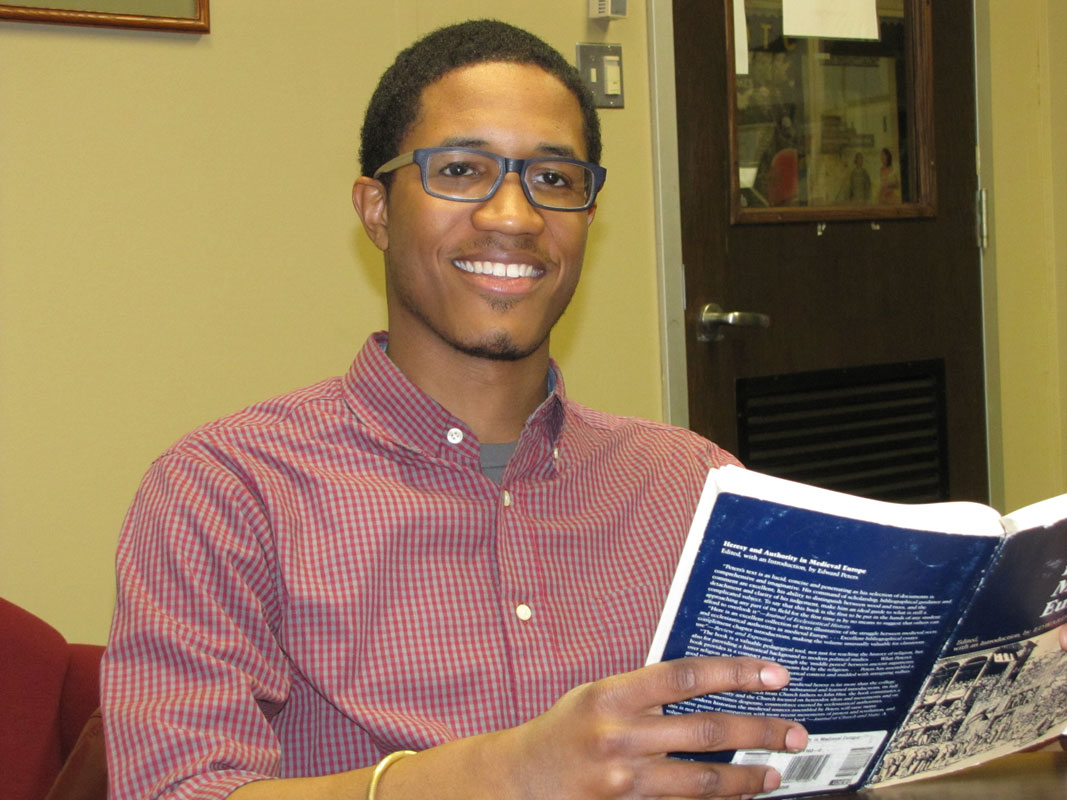 Eventually, Jonathan Wilson wants to teach disadvantaged students at a school near his Merrillville home.

But before the graduating Purdue University Calumet senior begins doing so, he will practice his teaching skills halfway around the world as a recipient of a prestigious, 2015-16 Fulbright Student Award. Wilson, 23, is believed to be the first Purdue Calumet student to gain the Fulbright recognition.

In October, he will travel to Ivory Coast in western Africa, where he will spend nine months teaching English to students of various ages and backgrounds.

“I’m excited to be selected, but I’m even more excited about what it means for other Purdue Calumet students—that it’s possible for this to happen,” Wilson, who is on track to graduate May 8 with a degree in history, said.

Through his Purdue Calumet learning experiences, he already is a veteran of two previous, international trips—to Nicaragua as a study abroad student and to Tanzania as a McNair Post-Baccalaureate Achievement Program scholar. He said he was encouraged to apply for the Fulbright opportunity by Professor and Head of Purdue Calumet’s Department of Foreign Languages and Literatures Maria Luisa Garcia-Verdugo.

Though the application process was competitive and extensive, Wilson said he received plenty of help completing it from campus faculty and staff.

‘…Making a difference…’
“We are so happy for Jonathan and his selection as a Fulbright student scholar,” Purdue Calumet Chancellor Thomas L. Keon said. “He represents the type of successful, active students who are making a difference and defining Purdue University Calumet.”

University McNair Program Coordinator Yolanda Beamon said the thirst for teaching that Wilson conveyed in his Fulbright application contributed to his selection. “He effectively expressed a passion for teaching and enabling social change through education,” she said.

But it has not always been that way for Wilson, the youngest of five siblings.

“I was a late bloomer in high school,” the Calumet High alumnus said. “I didn’t take school seriously my freshman and sophomore years.”

Self-confidence and empowerment
His attendance at Saturday morning classes of the Gary Freedom School helped change that.

Through the classes, held at Christ United Methodist Church in Gary and taught in part by Purdue Calumet Sociology Professor Alan Spector and Educational Opportunities Program administrator Akili Shakur, Wilson contends his self-confidence increased, and he gained insight about how empowerment can enable positive change.

“I learned that if we want to change something in our community, it’s up to us to do it—to get involved and make it happen,” he said.

Though he would enroll at another university following high school, he transferred to Purdue Calumet a year later. During his four years on the Hammond campus, his self-confidence has continued to grow, as has his willingness to become involved on and off campus.

Active on and off campus
He has been active in the university’s Social Justice Club, Black Student Union, Los Latinos and Brother to Brother organizations, having served as president of the former two.

As a scholar of Purdue Calumet’s McNair program—a federally funded initiative that encourages and prepares undergraduate, first generation college/low income students and those from populations underrepresented in areas of graduate education for graduate study—he was one of five undergraduates invited to present a research paper at the Association for Humanist Sociology national meeting.

He also has helped other Purdue Calumet students as an English mentor and supplemental instructor in sociology. Off campus, he is active in his church and works for the St. Joseph’s Carmelite Home for Boys in East Chicago.

Lessons learned
“Maybe the most important lesson I’ve learned (at Purdue Calumet) is we never stop learning,” Wilson said. “I appreciate that professors want to teach students to become critical thinkers, so that we can make society better.”

As for what he expects to gain from his Fulbright teaching experience, he said, “Even though I’ll be the teacher, I know I’m going to learn a lot from my students.”