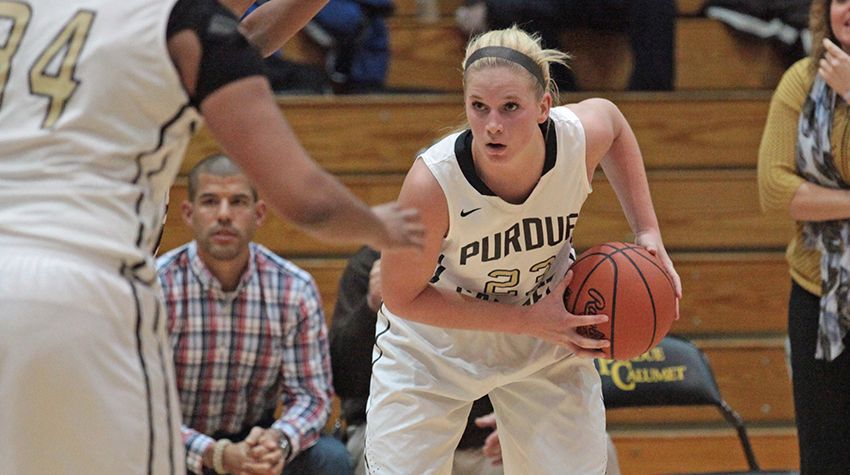 The No. 16 Purdue University Calumet took its first lead of the game with less than a minute to play and that proved to be enough, as the Peregrines edged host Holy Cross College on the road Thursday, 78-77.

With Holy Cross leading by six, 61-55, entering the fourth quarter, the Peregrines began to make their move. After a pair of Saints free throws, back-to-back buckets and the foul by Buggs and Deno cut that lead to just three, 63-60, with 9:20 to go. Buggs would add another jumper in the lane to bring the Peregrines within one, 63-62, but another HCC 3-pointer pushed that lead back to four and one more 3 made it a seven-point advantage, 69-62, with 5:54 left.

Holy Cross kept answering every Purdue Calumet run - with three more 3s - and led by five, 75-70, with 2:53 left. But two Deno free throws, a steal and layup by Darien Thompson (Anderson, Ind./Anderson), and two more Deno free throws cut that lead back to one, 77-76, with 1:30 left. A Holy Cross turnover that led to Buggs' jumper in the paint finally gave the Peregrines the lead, 78-77, with 34 ticks left.

Kari Barnes led Holy Cross with 20 points, Tagin Schultheis had 18 points - including 6-of-9 from 3 - and Keysha Streater added 16 points to lead the Saints in the setback.

Purdue Calumet returns to action Saturday, Jan. 9, when the Peregrines host No. 9 Cardinal Stritch in a CCAC battle of NAIA ranked teams. Game time is set for 1 p.m. CT at the Fitness and Recreation Center in the first game of a doubleheader with the men’s teams.