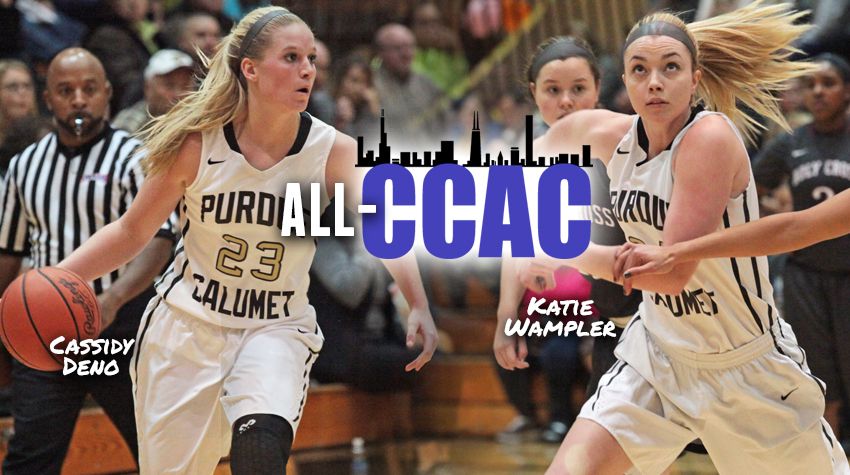 The Purdue University Calumet women's basketball team had two of its players recognized by the Chicagoland Collegiate Athletic Conference with the league's release of its all-conference awards Monday night.

Deno was third in the CCAC in scoring with 19.1 points per contest and added 6.7 rebounds, 2.2 assists, and 1.6 steals. The 5-foot-11 wing made 178 3s on the year, shooting 41.0 percent to go along with 42.4 percent from the field and 88.2 percent from the free-throw line, where she connected on 142 makes. Her biggest game in a 39-point outburst in a loss at Olivet Nazarene, which ranked as the second-largest single-game scoring performance since those records were kept in 2010.

Deno, who twice earned CCAC Player of the Week this season, earned her third all-league honor of her career, earning CCAC Second Team honors in both 2013-14 and 2014-15.

Wampler earned her first-ever league honor after a breakout year that saw her average 11.7 points, a team-high 7.8 rebounds and 1.6 steals per game while shooting 52.0 percent (119-of-229) from the field. The sophomore recorded five double-doubles on the year, including a 21-point, career-high 17 rebound effort in the Peregrines' CCAC Tournament loss to No. 7 Olivet Nazarene.

Olivet Nazarene, this year's CCAC Tournament Champion with Monday’s victory over St. Ambrose in the title game, boasted this year's CCAC Player of the Year in senior guard Abby Hengesbach, while Cardinal Stritch's Kelli Schrauth was named the Freshman of the Year. Coach of the Year honors went to Sam Quigley, head coach of regular-season co-champion St. Francis (Ill.).