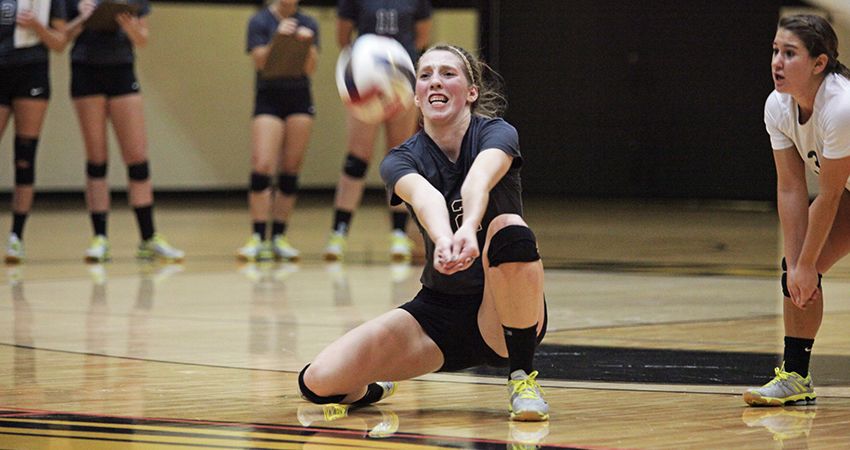 The Purdue University Calumet volleyball team fell to Indiana University Kokomo in a hard-fought battle in four sets Wednesday night in the Peregrines’ home opener at the Fitness and Recreation Center.

“I’m pleased with tonight’s performance and I thought it built on the progress we made from last night,” head coach Julie Wiejak said. “All you can ask is that your team gets better every match and right now that’s what were doing. If we can stay mentally strong and keep believing in ourselves there shouldn’t be any team on our schedule we can’t handle."

The Peregrines jumped out to an 11-6 lead in Set 1, thanks to a pair of kills from (Kayla Elsea (Palmyra, Ind./Crawford County) and a service ace by Carley Bartolini (Portage, Ind./Chesterton) that gave the Black and Gold momentum.

Purdue Calumet stayed aggressive on both sides of the ball and capitalized on the Cougars mistakes for the remainder of the set to give the home team the 25-15 win against IUK had a nine-victory winning streak earlier this season.

The Black and Gold would answer the Cougars point for point during the first half of the second set, before IU Kokomo pulled away thanks to the play of Lindi Thomas, who recorded six kills in the Cougars 25-16 Set 2 victory.

The Peregrines started the third set down 6-4, but battled hard to regain the lead, thanks to a kill from Carissa Jones (Hammond, Ind./Bishop Noll), two kills from Gabrielle Martin (DeMotte, Ind/Kankakee Valley) and a pair of service aces from Bartolini gave Purdue Calumet a 12-8 lead.

The Cougars would tie the set up 14-14 before the Peregrines rattled off three straight points to regain the lead, 17-14.

Purdue Calumet continued to fight hard in the fourth set, tying the game at 9-9, before the Cougars regained the lead in the middle of the set, 15-10.

Martin led all Peregrine attackers with 12 kills, while Carissa Jones hit an impressive .467 attack percentage with eight kills and just one error.

Bartolini finished with 30 assists while Samantha Basar (Plainfield, Ill./Plainfield North) and Pasko each had a match-high 13 digs in the setback.

The Peregrines head to Bourbonnais, Ill., Thursday evening for their first Chicagoland Collegaite Athletic Conference match of the season, as they take on Olivet Nazarene at 7 p.m. CT.