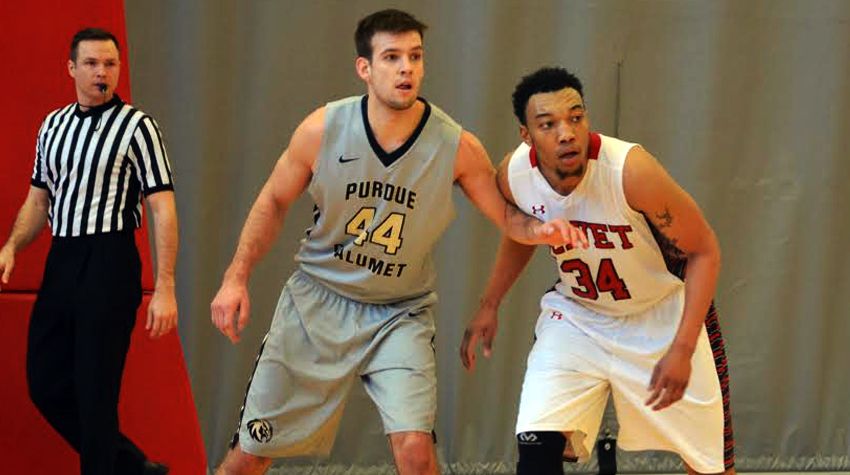 The Purdue University Calumet men’s basketball team picked up their second win in a row Saturday afternoon with a 54-52 win over Olivet College.

The Peregrines (7-9) were led by LaBradford Sebree (Kokomo, Ind./Kokomo) who recorded a game-high 22 points on 8-of-14 shooting while Danny Paschen (Schererville, Ind./Lake Central) notched his second career double-double with 12 points and 12 rebounds.

The opening half saw little scoring in the first 10 minutes of play, with the Comets (1-10) taking a 12-10 advantage with just over nine minutes remaining in the period.

Purdue Calumet would regain the lead with 7:19 left in the half, thanks to a 9-2 run led by Sebree andDarric Obinger (Munster, Ind./Calumet Christian).

Olivet tried to take the lead back towards the end of the half, but the Peregrines battled to extend their lead to 31-24 heading in to the break.

For the rest of the game both teams answered each other’s runs, with the Peregrines taking a 54-51 lead with eight seconds remaining.

With just 0.9 seconds left in the game, the Comets were fouled on a three-point shot attempt and had the chance to even the score with three free throw attempts.

Olivet missed their first attempt, making their chances to comeback very difficult, which helped the Peregrines come away with a 54-52 victory.

The Black and Gold return to conference play on Tuesday, Jan. 5, when they host St. Francis (Ill.) at 7 p.m. (CT) at the Fitness and Recreation Center.