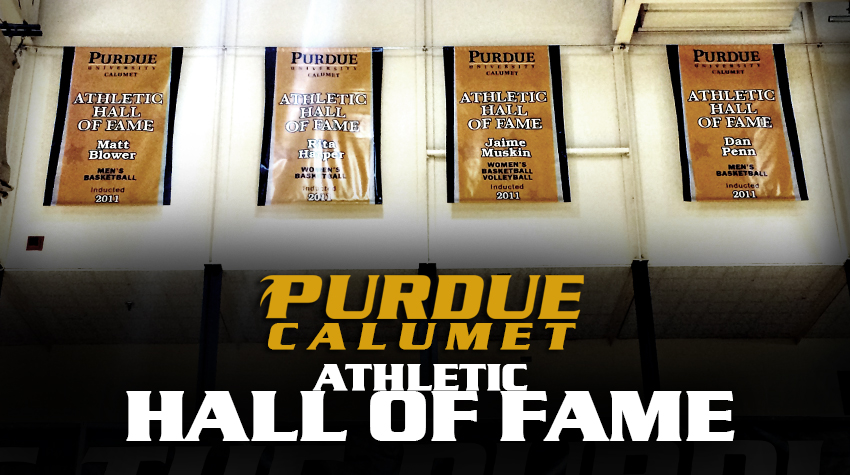 The Purdue University Calumet athletics department is proud to announce its 2015-16 Athletic Hall of Fame class with the induction of former basketball standouts Scott Sparks and the late Sandy Love-Todd.

The induction will take place on Saturday, Feb. 6, during the the Purdue Calumet men’s and women’s basketball doubleheader against Indiana South Bend. The women’s game is set to begin at 1 p.m. CT, followed by the men’s game at 3 p.m.

“We are thrilled to honor two very deserving players from Purdue Calumet’s storied athletics history,” Director of Athletic Rick Costello said. “Both Sparks and Love-Todd were instrumental in shaping the success of the early Purdue Calumet basketball teams and we look forward to recognizing the impact they made during their careers here.”

Sparks, a four-year letter winner for the Purdue Calumet men’s basketball team from 1994-98, stands third on the program’s all-time scoring list with 1,897 points. He was a two-time, first team all-conference selection during 1996-97 and ’97-98. During the latter season, he helped lead his team to the CCAC regular season championship and was selected conference Co-Player of the Year with fellow Purdue Calumet Hall of Famer Matt Blower after topping the Lakers in scoring (20.4) and rebounding (7.4). Also that season, Sparks recorded a career high 38 points and 15 rebounds in a 117-101 victory over Lambuth (TN) University. For his career, the 6-foot-5 forward averaged 14.4 points, 5.5 rebounds, 1.6 assists and shot .520 from the field.

Playing under head coach Larry Liddle, he helped the Lakers to 60 wins during that span, including two regular-season conference championships in 1994-95 and 1997-98.

Love-Todd was a four-year letter winner for the Lakers women’s basketball team from 1980-84, where she helped lead the young program, which began in 1979, to new heights. The 5-foot-8 shooting guard averaged 13.8 points, 5.1 rebounds, 2.9 assists and shot 44.6 percent from the field. Love-Todd finished her career as then the all-time leading scorer in program history, finishing with 1,046 points. That mark now stands 16th all-time.

The Merrillville High graduate earned NAIA All-District First Team honors during her junior season in 1982-83, where she led the Lakers to a 16-7 record and District 21 State runner-up finish. The Lakers, who compiled a 58-34 record during Love-Todd’s career, had their best season in 1981-82, when they finished 19-5 and captured the AIAW State Division III Championship.

Love-Todd, who passed away in Spring 2015 after a two-year battle with cancer, spent 22 years as a physical education teacher at Homewood-Flossmorr (Ill.) and carried her passion on the court to the coaching ranks, where she led both Rich South and Homewood-Flossmoor to state appearances in the 1990s.

Sparks and Love-Todd will mark the 17th and 18th members into Purdue Calumet’s Athletic Hall of Fame, which was created in 2007-08. For a full list of current members, check out Purdue Calumet’s Hall of Fame webpage here: http://www.purduecalsports.com/athletics/halloffame/