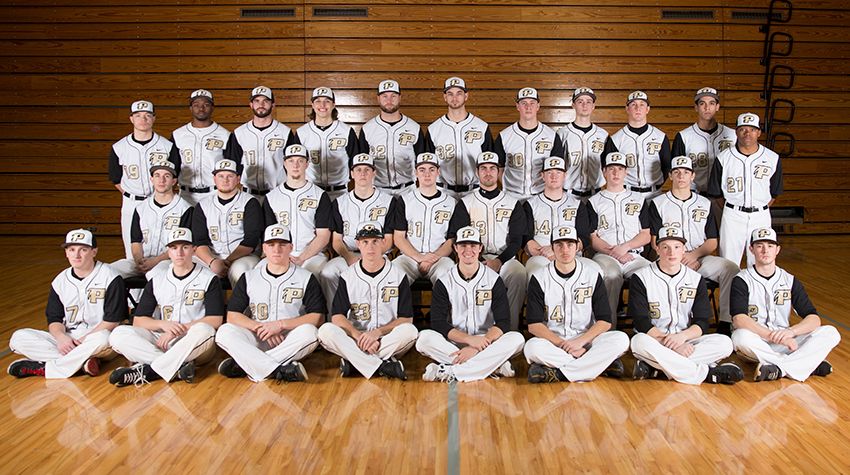 The Purdue University Calumet baseball team will looks to continue building upon its success from just its second season on the diamond, as the Peregrines have their sights set high for the upcoming 2016 campaign, set to begin Saturday, March 5, in the warm confines of Florida.

“We’re hoping to build off last years win total and take another step forward in the CCAC Tournament,” third-year head coach Dave Griffin said, referring to the Peregrines' record-setting 2015 season that saw then capture 23 wins and earn a spot in the league tournament.

SCHEDULE HIGHLIGHTS
The Black and Gold open its 2016 season in Florida from March 5-11, where the Peregrines will have nine nonconference contests.

When they return from Florida, the Peregrines will begin Chicagoland Collegiate Athletic Conference play against Trinity Christian March 18 in Palos Heights, Ill.

The Peregrines will have 11 doubleheader or three-game series contests with CCAC opponents, a year after going 16-14 in conference play last season to go along with a CCAC postseason appearance.

RETURNING PLAYERS
The Peregrines return 15 players from last year’s squad, including 2015 First Team All-Conference honoree, senior Cody Dykema (Crown Point, Ind./Lake Central). Dykema, in his first season in a Peregrine uniform, led the squad with a .403 batting average, which ranked fourth overall among conference leaders. He totaled 48 hits and led the team in doubles (eight) and triples (two) and home runs (two). He added 19 RBI and a .555 slugging percentage.

John Cristo (Munster, Ind./Munster) also returns for his senior campaign, after batting .280 with 20 RBI and 19 runs scored, while senior outfielder Eric Sickles (Benicia, Calif./Benicia) enters his final season with the Black and Gold, after recording a .329 batting average with 23 RBI and 20 runs scored last season.

Also returning to the squad is a quartet of pitchers who will play vital roles in this season's starting rotation. Pitcher Phil Madvek (Hobart, Ind./Hobart) begins his senior season after going 5-3 with a 2.93 earned run average last year. Junior Matt Sandoval (Highland, Ind./Bishop Noll) will join the rotation this season, after giving up just four earned runs in 16 innings of work in relief in his sophomore campaign.

Sophomores Jimmy Skiff (Dyer, Ind./Andrean) and Willie Bennett (Santee, Calif./West Hills) will look to add depth to the rotation. Skiff appeared in 10 games on the mound last season, striking out 26 batters in 39 innings of work. Bennett recorded a 2-2 record, with a 3.56 ERA in 30.1 innings of work last season.

Rounding out the returning players is Danny Jacobsen (Dyer, Ind./Lake Central), Jonny Albers (Waterloo, Ill./Waterloo) and Giulio Fantasia (Alpena, Mich./Alpena) who will add depth and look to make a solid impact on the field.

KEY ADDITIONS
The Black and Gold bring in nine freshmen along with three transfer students to help round out the Peregrines lineup.

Freshman Avondre Harris (Mishawaka, Ind./Mishawaka) enters his first season for the Black and Gold, after earning first-team all conference and all-state honorable mention honors for Mishawaka High School. The 5-foot-7 outfielder will look to add speed in the outfield and depth in the batting order, after recording at least a .500 on base percentage in his final two seasons for the Cavemen.

Freshman pitchers Brett Shoults (Oxford, Ind./Benton Central) and Michael Szumlas (Munster, Ind./Munster) join Purdue Calumet for their first season with the Black and Gold, and will look to add quality innings in the bullpen.

Andrew Atchison (Crown Point, Ind./Crown Point) will join the Peregrines for his first season in a Peregrine uniform, and will add a big bat in the DH spot.

“Andrew will supply us with some much needed power in the middle of our order,” Griffin mentioned.

Freshmen Roderick Jones (Milipitas, Calif./Milipitas) and Matt Casburn (St. Catherines, Ontario/St. Francis) round out the newcomers looking to make an impact this spring.

Crussen enters his junior season after spending the last two years at Harper College. He earned back-to-back second team all-conference accolades while accumulating a .340 batting average and 101 hits in two seasons with the Hawks.

“Tyler will create energy at the top of the lineup.” Griffin said. “Along with his offensive skills, he will give us a lot of speed in the outfield.”

Moskovsky comes to Purdue Calumet after two seasons at South Subruban, while Larriuz joins the Peregrines after playing for Cardinal Stritch the last two seasons, where he notched a .263 batting average with 4 RBI and 10 runs scored.