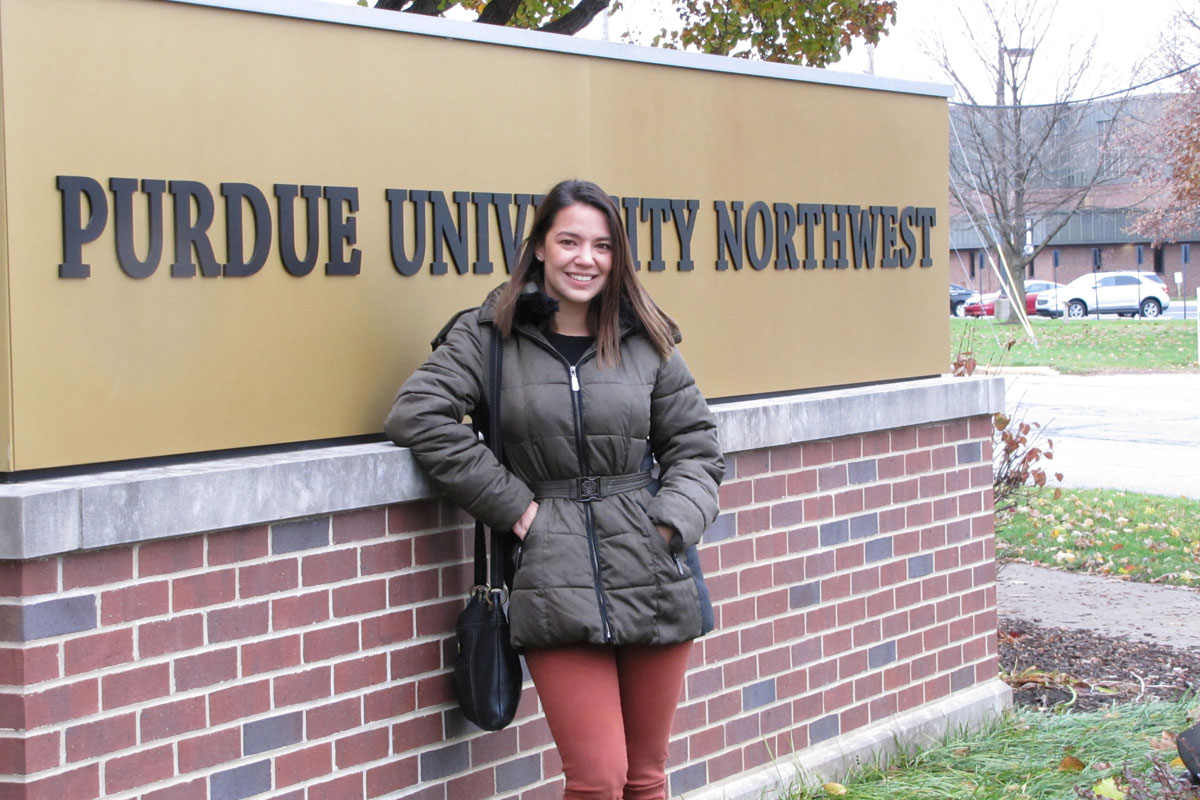 Jess Loy arrived at Purdue University Northwest’s Hammond Campus as a girl, but will graduate this weekend as a woman.

When Loy burst on the PNW scene in 2014 as a transfer student, she already was a star of another sort—on the softball field—and the PNW Hammond Campus was her third college stop to continue her athletic career.

Attitude change “I admit it; the main reason I came here was to play softball,” said the 22-year-old, Skokie, Ill. native now living in Valparaiso with her grandparents. “My attitude at the time was ‘I just want to play.’ In fact, my first two years previously in college were all about having fun and doing the bare minimum academically.”

PNW Associate Athletic Director for Academics Services and Senior Woman’s Administrator Jennifer Madgiak admitted, “We were concerned how Jess’s transition to our university would be.”

But then a remarkable change of attitude took place. “She hit the ground running in her first semester here,” Madgiak said. “She became involved in campus organizations, campus employment and the university’s Student-Athlete Advisory Committee.”

She also improved her grades to make the Dean’s List each semester. She pursued, obtained and benefited from five internships in her business field of human resource management. She became a co-founder and president of PNW Women in Business, as well.

She also became active with other student groups, served as a peer mentor for the College of Business and wrote a grant proposal to implement a Junior Achievement Program for underprivileged high school students.

She did all that while continuing to shine on the softball field as a second baseman who earned National Association of Intercollegiate Athletics (NAIA) Scholar Athlete and Chicagoland Collegiate Athletic Association All-Academic recognition. She also received her athletic department’s outstanding leadership award.

180-degree turn “It was a 180-degree turn for me—outlook, attitude, approach,” the soon-to-be, baccalaureate degreed Purdue Northwest alumna said. “It was a matter of finally coming to realize it was time to grow up and get serious about my future. Along the way, I met some wonderful people on campus who became mentors; they groomed my leadership skills and have helped me to the finish line when things have gotten challenging.”

That finish line for nearly 1,000 PNW seniors, who comprise the university’s first graduation class, begins Friday (12/9—5 p.m.) at PNW’s Westville Campus with the first of three graduation ceremonies. Two others are scheduled Saturday (12/10—11 a.m. and 3 p.m.) at the Hammond Campus.

‘Best of Purdue Northwest’ In her administrative and faculty roles with the PNW College of Business, Assistant Dean Feldman has viewed first hand Loy’s coming of age and her ability to engage successfully with peers and others.

“Jess represents the best of Purdue Northwest,” she said. “She is truly a role model for the many students she has mentored.”

Her days now consumed with pursuing job prospects and completing final undergraduate assignments, the prospective HR professional offered this advice to students who soon will walk in her shoes: “Take advantage of every opportunity to get involved and become part of something bigger than yourself.”