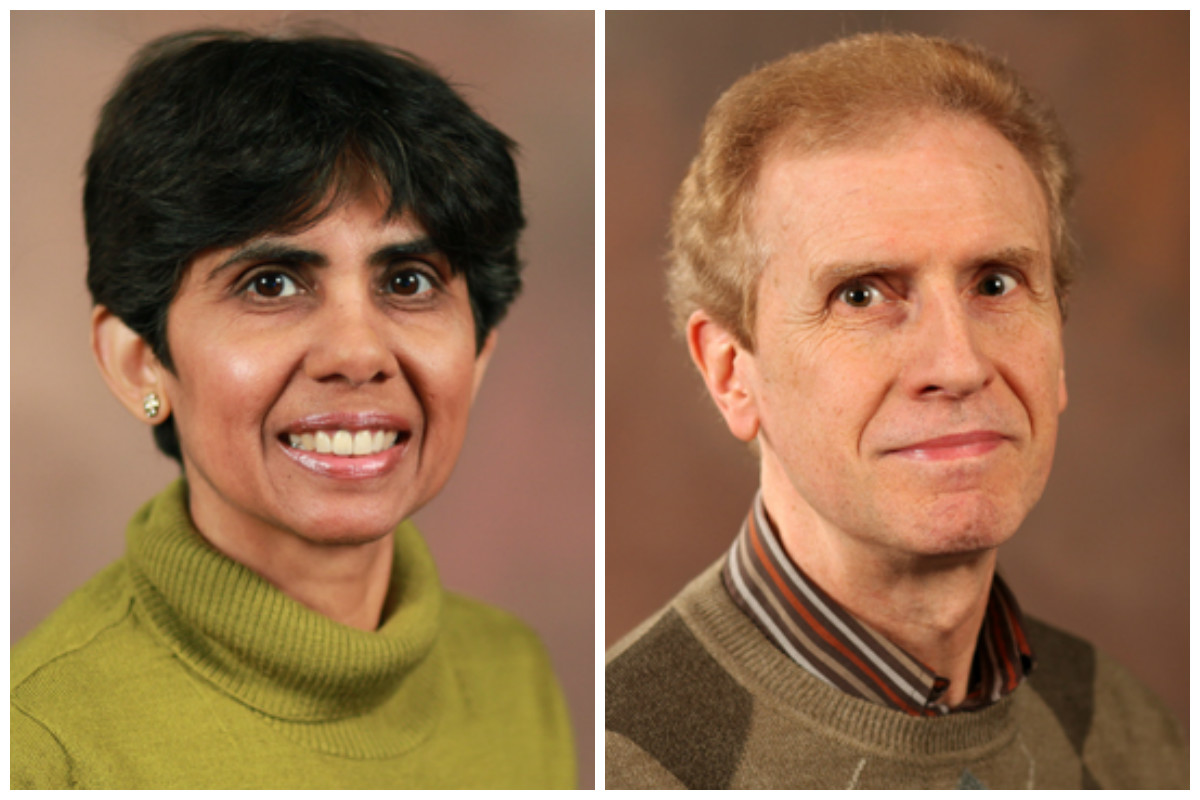 Scientists at the prestigious Karolinska Institute in Stockholm, the home of the Nobel Prize committee, recently made a surprising discovery that upon further inquiry, led them to research performed by professors at Indiana University School of Medicine – Northwest – Gary (IUSM-NW-G).

From their research involving the brains of germ-free mice -- those raised under sterile conditions and completely lacking any bacteria on their body and in their intestines -- the Swedish scientists learned that the presence of normal intestinal bacteria is required for brain development.

Soon after birth, brain cells start producing peptidoglycan recognition proteins (PGRPs), which are critical to maintaining a healthy intestinal microbiome and have anti-inflammatory properties. This finding led them to Roman Dziarski and Dipika Gupta at IUSM-NW-G, the professors who discovered the genes for human PGRPs.

The Karolinska Institute then invited the world’s top authorities on microbiome, peptidoglycan recognition, and brain development, for a symposium on “Microbiome, Bacterial Peptidoglycan and the Central Nervous System” in April. Dziarski, the only scientist to represent the U.S., was the first speaker, kicking off the symposium by introducing PGRPs and their effects on bacteria, microbiome, and inflammation.

The first goal of the symposium was to discuss how PGRPs detect peptidoglycan that originates from the microbiome and how PGRPs regulate brain development. The second goal was to chart future research to further unravel how the microbiome affects the brain. Ultimately, the researchers speculate that the research could one day lead to the development of new approaches to the prevention of several common psychiatric disorders, such as attention deficit hyperactivity disorder (ADHD).

Dziarski’s role at the symposium was to introduce PGRPs. Summarizing the overall picture that has emerged from the collective research, Dziarski explains how the scientists learned about the critical role that intestinal bacteria and PGRPs play in brain development.

“The fetal brain does not produce PGRPs,” Dziarski said, “but the newborn brain, while exposed to and colonized with bacteria during birth and immediately thereafter, begins to produce PGRPs. These proteins detect the bacterial component, peptidoglycan. Production of these proteins in the brain indicates that bacteria or their peptidoglycan component eventually find their way to the brain and affect brain’s development and function.

“Individuals exposed to bacteria from the microbiome are more anxious,” Dziarski continued, “Why would one want more anxiety and not less? Because a certain level of anxiety is probably an evolutionary adaptation to keep individuals ‘on guard’ to be more vigilant and prepared for potential adverse circumstances.”

The scientists want to know how PGRP interaction with bacteria or bacterial peptidoglycan in the brain causes these changes in brain development and behavior. To answer this question, Dziarski and the scientists will collaboratively work on multiple aspects of this important problem.

“We already know that mice lacking one of the genes for PGRP proteins have changes in brain development and behavior,” Dziarski said. “But there are four PGRP genes altogether, and we do not know what the effects of the remaining three PGRP proteins on the brain function and development are.”

To answer those questions, Dziarski and Gupta will continue to work with the Karolinska Institute to determine the role of these remaining three PGRP proteins in brain development and function. They will also work to unravel how exactly interaction of microbiome with PGRP proteins affects the brain. For example, do bacteria from intestinal tract or respiratory tract microbiomes find their way into the brain, or only bacterial components, such as peptidoglycan, enter the brain and affect brain development and function?

Future studies in collaboration with scientists from Canada and Netherlands will also involve similar analysis of the brains from patients with various neurologic and psychiatric disorders.