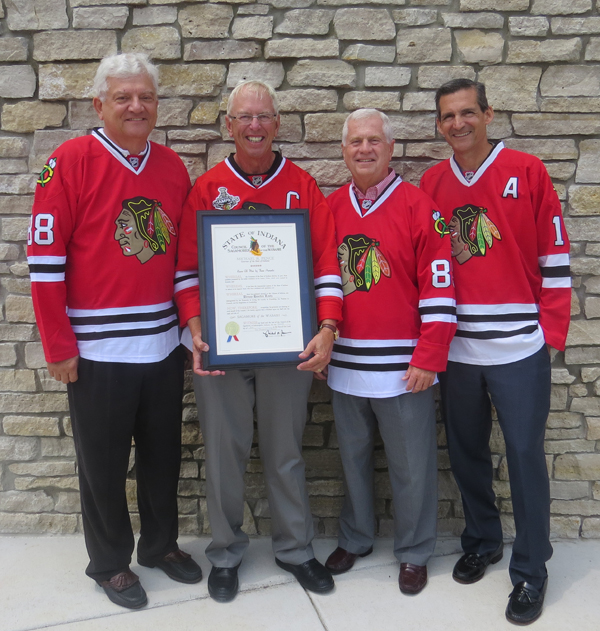 On Thursday, State Senator Ed Charbonneau (R-Valparaiso) along with other elected officials had the privilege of presenting Indiana Beverage CEO Bruce Leetz with the Sagamore of the Wabash Award on behalf of Governor Mike Pence. The Sagamore is the highest honor that the governor can bestow and is only presented to distinguished Hoosiers who have made incredible contributions to the state. This month celebrates Leetz’s 50th year in business, creating countless jobs in Northwest Indiana.

“He is the epitome of what the award stands for,” said State Senator Ed Charbonneau (R-Valparaiso). “In addition to his success in business, Bruce personifies the term ‘gentleman.’ His achievements and contributions are products of his character.”

Leetz began working at Valpo Beverages in 1963 and was later appointed president in 1970. As the company expanded, increasing its distribution from Porter County to seven total counties, Valpo Beverages changed its name to North Coast Distributing and appointed Leetz as CEO. Under Leetz, the company continued to expand, employing more Hoosiers, and in 2012, merged with Indiana Beer to become Indiana Beverage.

Dating back to the mid-1940s, the Sagamore Award was created by Governor Ralph Gates. The term “sagamore,” used by the Northeastern United States Native American Tribes, refers to a great man that the tribal chief would look to for wisdom and advice. The award is the highest honor that the governor can bestow and is presented to Hoosiers who have rendered distinguished service to the state, contributing greatly to Indiana’s rich heritage.

“This honor is so well deserved. We are pleased to see Bruce properly recognized for his contribution to the industry and to our community,” said Valparaiso Mayor Jon Costas.