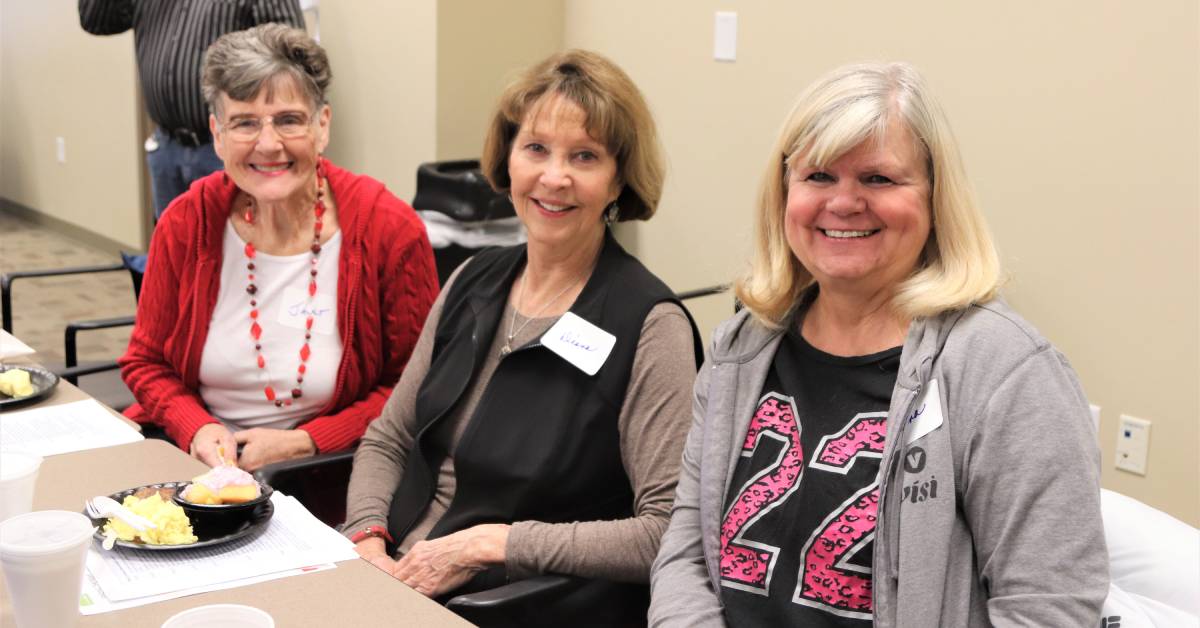 Everyone has experienced the sensation of entering a room only to forget what they were looking for or bringing up a conversation topic only to lose their train of thought. Most of us have uttered the phrase, “It’s right on the tip of my tongue!” when trying to think of a specific word or name. These lapses, however, become more common with age. While they’re associated with the typical transitions and inconveniences of aging, there are a few distinctions that could signal a more serious concern.

Porter Regional Hospital’s free HealthPorte senior program features monthly presentations designed to help individuals ages 50 and better maintain healthy, vivacious lifestyles and stay one step ahead of the changes they might experience in their golden years. This month’s topic addressed speech, cognitive, and swallowing changes in the aging adult and the various treatment options to help people work through those difficulties.

“I think it’s a common misconception that speech failure and lapses in memory are just a sign of aging, but sometimes they can be a definite sign of cognitive deficit,” said Carlos DeJesus, Director of Porter Outpatient Rehabilitation Services. “A good takeaway from today’s talk and any HealthPorte talk is to be more proactive, to recognize the signs that are not always normal signs of aging.”

Rife unpacked the differences between normal aging and signs of impairment in each category. She said that when it comes to cognitive function, people of all ages find themselves in similar predicaments to the ones described above, no matter their age. She began her talk by calling out a series of questions like, “Where did I just put my phone?” and “What was I going to say?” and having attendees raise their hands if they’d ever asked themselves the question.

“I started asking myself these questions when I turned 40, if not before that,” she laughed. “There are a lot of factors that can contribute to them, and not all of them have to do with age.”

Nevertheless, Rife continued, age plays a big factor in how various signs of impairment advance, no matter what the cause. The senior population is much more prone to cognitive impairment when taking certain medications, recovering from surgery/anesthesia, suffering from an illness, being stressed, anxious, depressed or even experiencing a urinary tract infection. Some conditions, such as dementia, indicate a progressive illness. No matter the situation, it’s important to get to the root of the cause and treat it if it progresses.

“There are a lot of great medicines and treatments for those diseases now,” Rife said. “It’s always good to have those situations addressed early on.”

Rife said that treatments often include creating strategies, such as placing car keys in the same spot every day or keeping a detailed planner.

“According to the American Academy of Neurology, thirty minutes of cognitive activity, seven days a week, are very beneficial,” Rife said. “Keeping your mind engaged keeps it active. Learning new things can be helpful, too. When you’re not repeating the same patterns and habits every day you’re keeping your mind sharp and pliable.”

Rife said cognitive activity can be everything from card games, puzzles, and reading, to socializing with old friends and watching the Bears game for talking points later.

When it comes to difficulties in speech, such as being unable to find the right words or express them, Rife recommended a substitution method.

“If you can’t think of a word, try thinking of a synonym or description,” she said. “I’ll often have my patients give me three different ways to say a phrase such as ‘an apple a day keeps the doctor away.’”

Rife had volunteers substitute ways of saying, “the cat jumped over the fence” to test the practice.

Some speech issues, such as raspy voice, can indicate damaged vocal cords, and difficulties swallowing can indicate a weakness of the muscles. Swallowing impairment, or dysphagia, can occur due to surgery, chemotherapy and/or radiation, medications, COPD, dementia, or reflux.

“Believe it or not, most of the patients I see have difficulties swallowing due to reflux,” Rife said.

Other signs of dysphagia include pocketing food in the sides of the mouth, coughing and throat clearing during eating or drinking, and pneumonia, which occurs when a liquid or bacteria becomes trapped in the mouth or throat and infects the lungs. This is why oral care is very important. Other strategies to assist with dysphagia, such as a mechanical soft diet or straw restrictions, are all very individualized to the patient. Doctors can determine the weakness of muscles using a modified barium swallow exam, which uses a videoed X-ray called fluoroscopy to evaluate the patient’s swallowing. Should an issue be determined, professionals like Rife can help.

“The goal with any type of therapy,” Rife said, “is to improve and maintain certain skills so patients don’t decline rapidly, maintain independence, maintain safety, and prevent or delay the need to transition to assisted living.”

Attendees at the HealthPorte talk were engaged and appreciative of the discussion. Nancy and Larry Pennell, HealthPorte members for more than six years, said they come away from each event more knowledgeable than when they entered.

“We became interested in the group mainly due to our age, but also because it seemed like a helpful activity to be involved in,” Larry said. “We’ve learned to change our eating habits, how important exercise is, and I’ve been in tune with watching for certain signs of arthritis after one particular talk.”

Although neither had any personal history with this month’s topic, they were prepared to take notes and look for future signs.

“I always learn something!” Nancy said. “I’m sure today will be another eye-opener.”

For your convenience, here are signs of impairment vs. normal signs of aging.