Out of sight, out of mind – that’s what happens when health problems that we cannot see occur. It’s hard to ignore a problem when we can see it, but when we go through health issues that are on the inside, in this case we’re speaking of sinus issues, it’s more difficult to deal with.

At the tail end of January, Porter Health Care System held “Don’t Run from Sinus Problems”, a presentation by ENT Specialist Dr. Geoffrey Schwartz. An ENT, or Otolaryngologist, is a physician who is trained to treat patients with diseases and disorders regarding the ear, nose, and throat. Dr. Schwartz has been practicing with Porter for the last four years. He treats ear, nose, and throat conditions in people of all ages.

“A lot of people who have sinus problems don’t know they have sinus problems,” Dr. Schwartz said. “So they are dealing with these issues and dealing with the symptoms because they are used to them. But if we can recognize the symptoms and what is causing them, then treat those symptoms and underlying conditions, then they can feel a lot better. A lot of my patients have a new lease on life after they come to us and let us help them with their sinus issues.”

The presentation began with a bit of history on the good doctor, and then it was right down to business.

Did you know that about 37 million people suffer from sinus problems each year in the US? That’s about 17% of our population. And 20% of all antibiotics are prescribed to treat sinusitis, this equates to about $7.8 billion in health care costs.

So what are sinuses?

Sinuses are hollow pockets around the face and head that are lined with soft tissue called mucosa. The mucosa is covered with cilia, or tiny hairs that beat in unison to move mucus out of the sinuses. There are four sinuses:

“Sinuses act as crumple zones,” Dr. Schwartz said. “Similar to a crumple zone on a car, sinuses act similarly to lessen damage to other structures like the eyes and the brain. The sinuses are the first place that allergens, pollutants, or irritants are presented and captured so they are important for immune system function.” 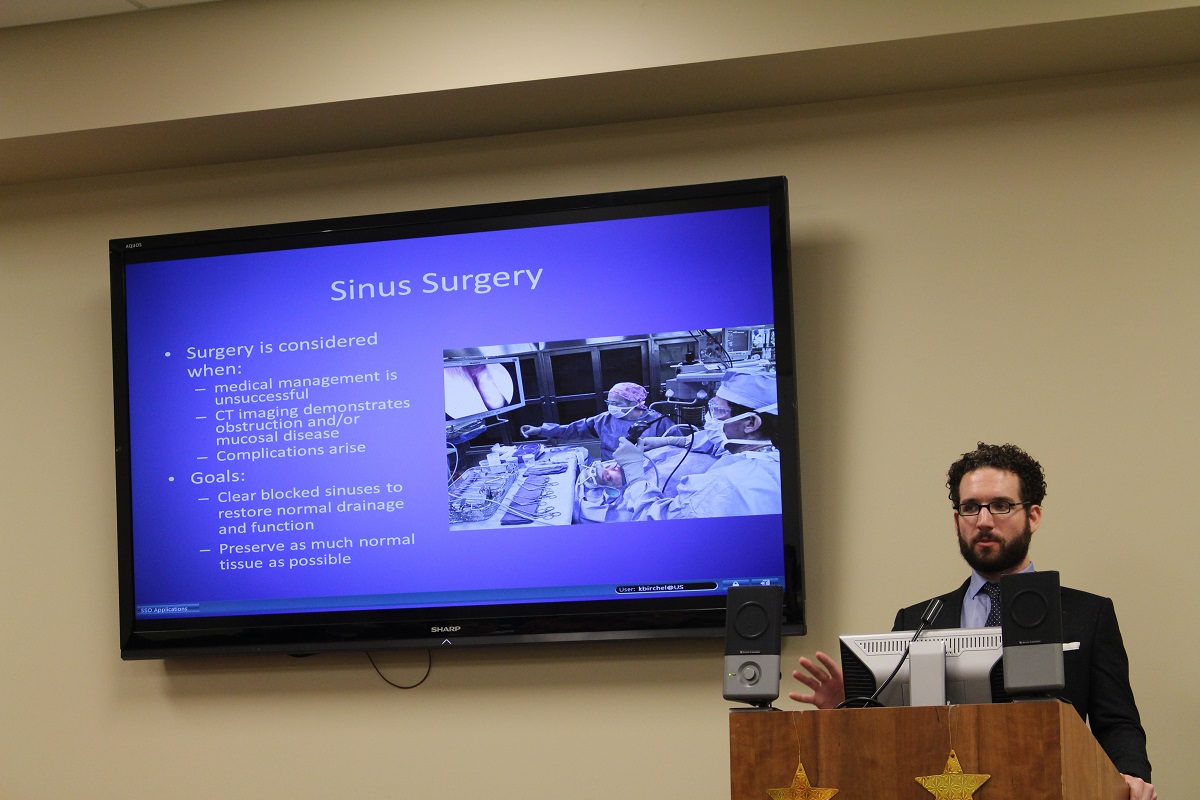 There are different types of sinusitis:

Chronic sinusitis can be caused by environmental factors like cigarette smoke or pollution, patient factors like allergies or asthma, pathogenic factors like mold, viruses, or bacteria, and anatomic factors like narrow sinus passages or nasal polyps.

By the way, a nasal polyp is a growth that forms in the sinuses due to inflammation that was caused by an infection. Polyps can be treated with medication or surgery if severe enough.

The symptoms of chronic sinusitis include: reduced sense of smell, congestion, sinus pressure, barosinusitis, cough, swelling around the eyes, nasal discharge, and all of these symptoms linger for a long time.

Dr. Schwartz explained that often, chronic sinusitis can be treated with medication, but there are cases that can only be taken care of through surgical intervention. Surgery is considered when medical means have failed, complications arise, or CT scans reveal obstructions or mucosal disease. Open sinus surgery used to be the preferred method, but times have changed and now physicians are going with procedures that preserve as much bone and tissue as possible. Minimally invasive sinus surgery or balloon surgery are both good options that patients have.

Dr. Schwartz concluded the evening by taking questions from the attendees. Afterward, everyone received a free Neti-Pot sinus rinse kit to take home with them.

If you or someone you know suffers from sinus ailments, click here find out more about Porter’s Ear, Nose, Throat & Sinus Center.