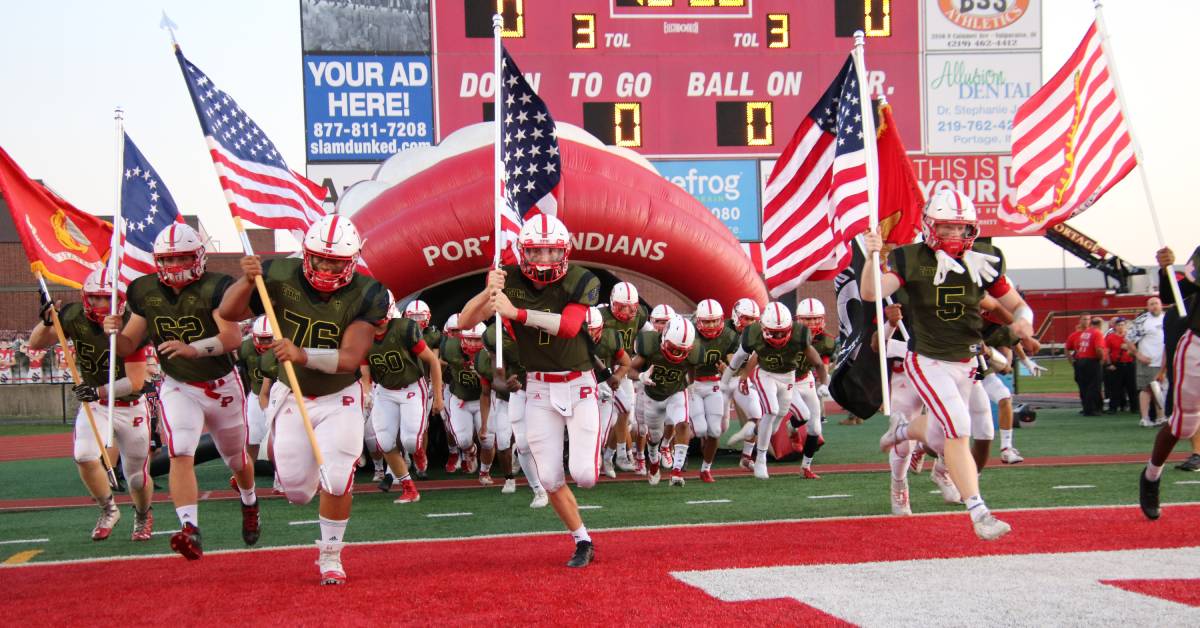 In a tight game that came down to the last few minutes, the Crown Point Bulldogs managed to eke out a win on the road Friday night, besting the Portage Indians 22-16.

“For us, it’s good to recognize everyone that has helped us, whether you’re an EMT, in the National Guard, or really any branch of the military or service,” said Portage Head Coach Darren Rodriguez. “We’re going to do what we can, and hopefully put on a good show for people.”

“It’s an honor to serve our community and to be here today,” said Portage Fire Department Paramedic Firefighter Ashely Harders. “This is the first time we’ve done an event like this. It’s pretty cool.”

In recognition of their service, present and former military members received free admission to the game and were invited onto the field for an honor ceremony, alongside the attending first responders, just prior to kickoff.

During warmups, Crown Point head coach Kevin Enright said the team had a pretty typical, smooth week preparing for the game, despite the warm weather. He emphasized minimizing errors on the field as their victory strategy.

“I’m looking forward to playing some mistake-free football,” said Enright. “We haven’t been able to do that. We get in our own way and it puts us in a bind.”

Portage dominated most of the first half, scoring the game’s first touchdown just minutes into the first quarter. Running back Scott Hansen (#5) caught a 65-yard pass from quarterback Zack Warchus (#7) in the opening drive to get the team to first-and-goal, then hit the endzone off a short pass a few plays later.

Ahead of game-time, Portage DB Coach Sam Daniels showed off a bedazzled “P” hanging from an oversized gold-colored “turnover chain.”  Whenever a player lands a fumble-recovery or a pick-6, he explained, they run over to the sidelines and get bestowed with the bling.

“It’s an incentive to encourage the guys to go out there and make plays,” Daniels said.

It worked. Portage came up with two big turnovers, one of which was an interception caught by Damarion Lee (#20) near the end of the first quarter.

But Crown Point drove back hard toward the end of the second quarter, coming together to help shove quarterback Will Pettit into the endzone on a short, forceful run play to tie things up.

After halftime, Crown Point running back Matthew Walters, who ran a 99-yard kickoff return against Lake Central High School last week, picked up steam and ran away with the game, scoring two touchdowns in the second half.

Portage fought hard, but despite a second turnover and an 85-yard touchdown run from Warchus, they couldn’t quite regain their earlier momentum.

Next week, Portage will get another shot at bringing home a win when they host the big rivalry game against Chesterton. Crown Point will continue their road trip, taking on the undefeated Valparaiso Vikings.