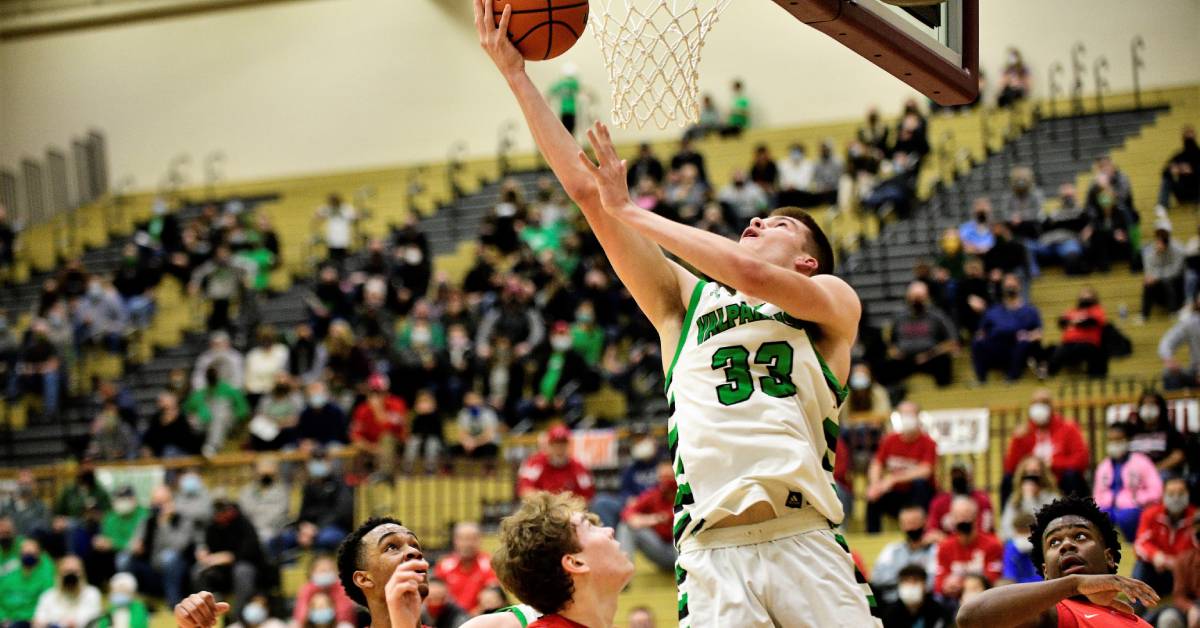 Words cannot describe the action filled Friday night as the IHSAA Sectional Basketball Semi-finals commenced at Chesterton High School. In the first game, the Lowell Red Devils took on the Portage Indians. The game could not have been much closer as the two teams battled to the end.

At the start #30 Christopher Mantis put the Red Devils on the board when he sank the first basket of the game. #25 Blake Creech of the Portage Indians answered with a two point basket of his own and it was a fight from there. Just before the end of the first quarter,  #2 Cayden Vasko stole the ball from the Indians and went in for a lay up. He initially missed the lay up but quickly rebounded the ball and successfully scored, putting the Devils within one point at the quarter buzzer.

In the second quarter the Devils came out strong, taking a quick lead that Portage did not let it last. They regained control of the ball and the scoreboard ending the first half ahead by just two baskets.

During the third quarter fans erupted when #30 Christopher Mantis scored on a steal putting Lowell in the lead once again. #20 Kamari Slaughter did not let the Devils stay ahead long as he quickly answered with a two point basket of his own. Just like that the Indians were ahead by one point but in a surprising twist it was the Devils who won the third quarter ending with a score of 28-26.

It all came down to the fourth quarter where the Indians would regain control and keep it. Portage fans cheered when #25 Blake Creech had an impressive steal with a resulting successful basket. With just three points separating the teams at the end, Lowell attempted a three point basket without success. After a series of free throws on both sides, the final score was Portage 41 points, Lowell 36.

Portage Head Coach Rick Snodgrass teared up after the game. .

“I am excited for the kids,” he said. “I am so happy for them. They get to play in sectional playoffs. It was a great team effort. They did everything defensively and executed the plays.”

“We haven’t won one like this in 20 years so it feels good. And it’s my first one too,” said Portage’s Jorryn Junigan. Successfully hitting his end of game free throws, and the team coming back in the fourth quarter, Junigan said he will always remember the game.

For Kamari Slaughter it was the fan’s excitement and the team working together that he will always remember.

“We did what we needed to do to win the game,” said Slaughter. He was already focused on the upcoming championship game.

“If we keep the same positivity, the hype, and excitement, we will be good,” said Slaughter.

In the second game of the night it was the Crown Point Bull Dogs and Valparaiso Vikings. From the start the Vikings made a statement when #3 Michael Flynn successfully sank a three point basket, putting them on the board. In turn, #4 Breece Walls did the same giving the Vikings an early six point lead. The Vikings would keep that lead ending the quarter ahead by four points.

In the second quarter the Bulldogs were held back by a strong Viking defense resulting in the Bulldogs scoring five points to the Vikings ten points. Despite the efforts of #12 Ty Smith and #14 Drew Adzia, the Bulldogs were no match for #4 Breece Walls, #33 Mason Jones, and #50 Cooper Jones who, along with their team, finished the quarter with the Vikings ahead 24 to 15.

In the second half the Bulldogs gave it their all briefly narrowing the lead but the Vikings continued to score points, ending the third quarter ahead by 14 points. The Vikings won the game by sixteen points with a final score of Vikings 47 points, Bulldogs 31 points.

“We are pleased with our defensive performance and excited to advance to finals,” said Vikings’ Head Coach Barak Coolman.

“We need to continue to do what we do. Be simple and solid. That is something that we have been working on all season.”

“We played tough. We were always the first team out on the floor. We were right for every rebound. We had our hands up on the shooter,” said #4 Breece Walls. “At the end of the day it all worked out and we got the win.”

Walls was already focusing on the upcoming championship play off against Portage.

“It’s not over yet. We have another game ahead of us,” said Walls. “This win is already in the past. We have to stay healthy and keep our mind right so we can go on to win.”

Vikings’ #50 Cooper Jones was grinning ear to ear after the game.

“We all came in expecting a war and it was a war. All game long we played solid and did what we needed to do,” said Jones. He is already focusing on the upcoming Championship game.

“I know the coaches will have us ready. We will be watching films,” said Jones. “We will play as hard as we can, control everything we can, and the score is the score.”

The Valapraiso Vikings and Portage Indians will face off March 6h at 7pm at Chesterton High school with the winner advancing to Regional Playoffs.