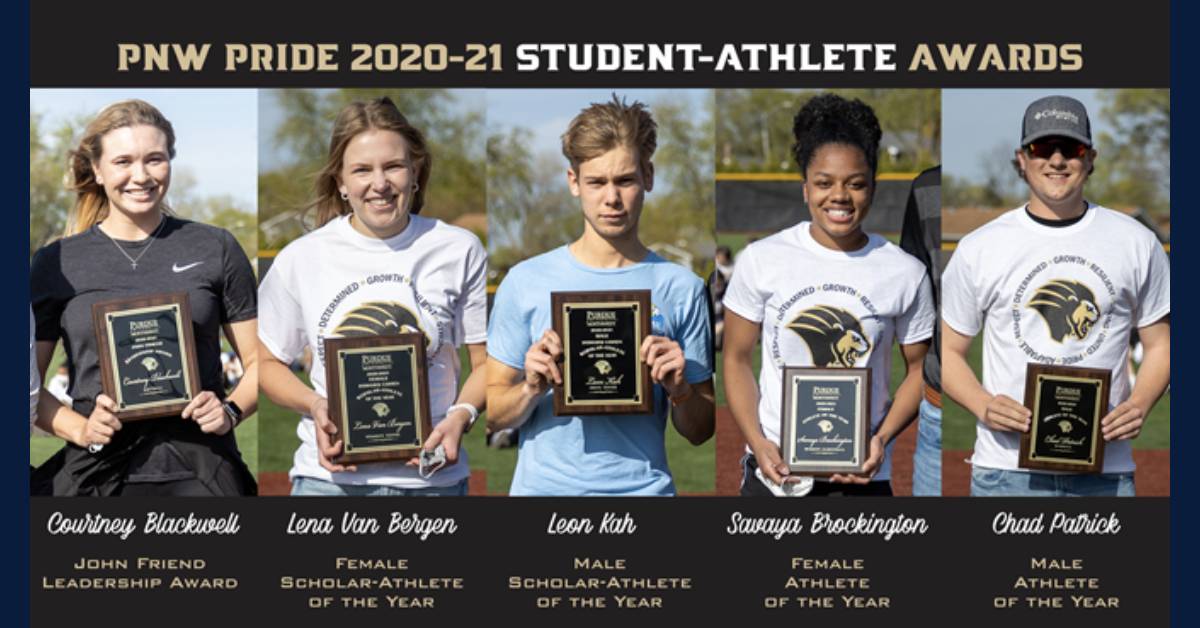 PNW, which entered its fourth year as a member of the Great Lakes Intercollegiate Athletic Conference (GLIAC) and competing at the NCAA Division II level, put on the event to celebrate its amazing student-athletes. The Pride have persevered through new challenges brought on by the global pandemic to build one of the most successful seasons, both in and out of the classroom, to date.

Senior Courtney Blackwell from the softball team was selected as the 2020-21 John.Friend Leadership Award recipient. This award, which is named after Director of Athletics Emeritus, John.Friend, recognizes the most distinguished student-athlete within the athletic department who embodies academic success, leadership, community service, humility and strong moral values. Blackwell, a native of Whiting, Ind., is a member of the Honors College as an English/Secondary Education major.

Among her numerous accomplishments, Blackwell has served as Community Service Chair on the Student-Athlete Advisory Committee and she has led the department in community service hours the past two years. Recently, Blackwell organized "Pride for Women", a public relations campaign for National Girls and Women in Sports Day where she led a team of student-athletes to help bring attention and awareness to the gender inequity issue in athletics. On the field, Blackwell was named an All-GLIAC performer in 2019 and she leads the team this season in wins (5), innings (70.0), strikeouts (52) and batting average against (.276).

The Female Scholar-Athlete of the Year honor went to Lena Van Bergen from the women's tennis team. Van Bergen, a senior from Wesel, Germany, is a business major and has been a constant presence at the top of the Pride lineup, having never missed a tennis match in her four years on the court. The Male Scholar-Athlete of the Year award went to Leon Kah of the men's tennis team. Kah, a senior from Munich, Germany, is an accounting major with a minor in economics. He's a two-time All-GLIAC performer on the court and finished this past season with a record of 11-3 in Singles play.

Sophomore Savaya Brockington from the women's basketball team won the Female Athlete of the Year award. Brockington, a native of Indianapolis, earned All-GLIAC Second Team recognition after leading PNW in several statistical categories including points per game (15.0). She scored a career-high 37 points against Wayne State on Feb. 6 and recorded 36 points versus Parkside on Feb. 16. Those are the highest single-game scoring totals in women's basketball during the school's Division II era.

One the men's side, senior Chad Patrick from the baseball team won the Male Athlete of the Year award. Patrick, a native of Hebron, Ind., is putting together an historic campaign on the mound this season for the Pride. Through seven starts, the right-hander leads the GLIAC in strikeouts (71), shutouts (3) and wins (5), while ranking second in earned-run average (1.41) and strikeouts per game (12.53). Patrick began the season by posting 24.1 consecutive scoreless innings. He is a two-time All-GLIAC award winner and will be in the running for GLIAC Pitcher of the Year this spring.