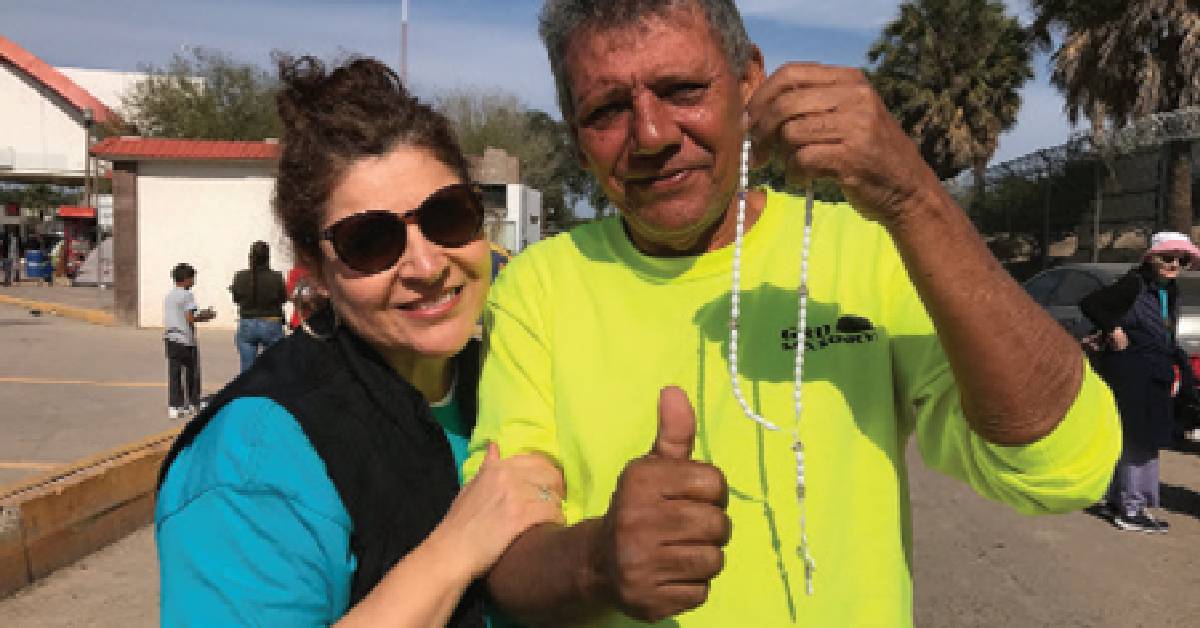 It’s rare for a week to be so life-changing, but that’s exactly what happened to the four PHJC co-workers who used the Volunteer Time Off (VTO) program to serve with Sister Connie Bach in December at the Humanitarian Respite Center of McAllen, Texas and in Matamoros, Mexico. Each of us came home with eyes wide-open and hearts filled with gratitude for the opportunity to serve. While each co-worker had her own reasons for going, the common denominator was to serve our sisters and brothers seeking a better life in the United States. The co-workers were Becky Anspach and I from The Center at Donaldson, and Herlinda Castro and Holly Cummings of Ancilla Systems, Inc. The Poor Handmaids offer co-workers 96 hours of paid VTO annually.

While we had previous volunteer experience serving the poor, whether at Poor Handmaid ministries or at our own churches, nothing could have prepared us for the desperate poverty we bore witness to. In Matamoros, the tent cities stretched forever. People washed clothes and bathed in the Rio Grande River, cooked over wood fires, and nursed their infants while waiting in line for donated food and supplies. At the Humanitarian Respite Center of McAllen, Texas guests regrouped before continuing their journeys to various localities across the country, where family, friends, or another sponsor awaited their arrival. The situation at the border is the manifestation of poorer nations suffering at the hands of the wealthier nations’ failed policies and insatiable use of resources, which contribute to climate change and desertification, making crop growing impossible. It would be hard for anyone to endure, and yet they do. Refugees and immigrants from all over the world risk the dangers, seeking safety and opportunity for themselves and their families in the United States. Contrary to what some believe, not one person we spoke to cited a free ride from the United States government as their impetus for leaving the only home country they knew.

The need was unending, but our hope was continuously rekindled and even flourished through Partnering in the Work of the Spirit with caring individuals from other communities, their volunteers, and concerned citizens from across the country and the world. We worked 10 to 12-hour days, serving at both The Humanitarian Respite Center of McAllen and commuting every day to Brownsville, Texas to walk into Matamoros, Mexico, with wagons loaded to the brim, to serve those residing in desperately poor tent cities. Sisters from Notre Dame de Namur of Boston and the Ursuline Sisters of Ohio, along with Sisters from Iowa and Minnesota helped serve daily meals with us to guests of The Humanitarian Respite Center. All that was in addition to preparing food and supplies for the next day’s trip into Mexico. When Father Greg Warren, an Episcopal priest from Conway, Arkansas, also a volunteer that week, remarked how clean our group was keeping the respite center, I informed him: “It’s not just clean, Father; it’s Poor Handmaid clean!”

Building community with fellow volunteers grew, much like our commitment to the mission and to those we served, as the week progressed. We were fortunate to have Sister Connie to provide not only much-needed humor when the days got long, but also to help us process the good, the not so good, and the divine each evening when we returned to our rooms. We called these moments “Rose, Thorn, and God Moments" as we went around the table and opened up to one another about what vexed us, gave us hope, and showed us the face of God in those we served. For me, two “roses” were getting to know Holly and Herlinda as co-workers and friends. Also, it would have been impossible to get done all we did in our short time there without Herlinda and her fluency in Spanish. She helped organize the lines each morning when we got to Matamoros. The kids came running to meet us shortly after spotting our familiar parade of turquoise blue Catholic Charities T-shirts. The families soon followed. She was able to get each family’s story about why they sought freedom in the United States and ascertain the little things they needed to help make a living in a tent city more bearable.

For Matamoros tent city resident, Eduardo, wanted a rosary. Herlinda was able to deliver one to him on our next visit. He thanked us for coming and bringing them food and donations. “Later Edwin, another Matamoros resident, humbly asked me if I could bring him a Santa suit,” Herlinda said. His wish was to dress like Santa on Christmas Eve and have the parents take pictures of their kids with him. His idea was to give the children in the tent city a memorable Christmas Day. On our last day of taking donations to Matamoros, Holly and I decided to work in the ‘clothes area’ while everyone was loading donations to take to Matamoros. When we started organizing some of the clothing in the bags, Holly happened to pick up a package from the floor area. To our surprise, it was a new Santa suit! I immediately shouted with joy, ‘Oh my God, a Santa suit for Mr. Edwin!’ I recognized in my heart that this was not a coincidence. This was definitely a “God moment!” God made it possible for Mr. Edwin to bring joy to each little one. "I felt so much joy and immediately let everyone know we found a Santa suit for Mr. Edwin,” Herlinda added.

Another “God moment” occurred when Sisters from both vehicles called each other on the return trip to McAllen from Matamoros because they simultaneously had the idea to resupply long-time, Respite Center volunteer, Willy Perez with tents and air mattresses to distribute to tent city residents. Some tent city residents have been there for eight-ten months, and the tents simply aren’t built for that kind of continuous camping. We were stunned that it occurred to us at the exact same moment, so we took Willy

to a Wal-Mart between the two cities and made the purchases. He was so happy he jumped onto the cart and rode it down an incline into the parking lot! It was a perfect counterbalance to my “Thorn Moment” earlier in the day, when two little boys, ages 6 or 7, from the tent city approached me as I was breaking down boxes from our visit. Through Google translate, I learned that they wanted the boxes to pad their sleeping bags. I was happy to share them, but that night, sleep came to me in fits as I thought about the boys while in my warm, comfy bed back at the hotel. Doesn’t every child deserve a warm, dry, comfortable place to sleep?

We were also astounded by the number of places asylum seekers were coming from, Central America, but also Haiti, the Congo, Brazil, and several states in Mexico were all represented in the populations we served. One of the most heartbreakingly beautiful parts of the trip was seeing Catharina, a mother from Honduras, reunited with her sons, Christopher 11, and Gary, 8, from whom she had been separated for five months. Her husband and the boys’ father was killed by gang members in Honduras, and while she endured five months without them, they were together again for Christmas, which was beautiful. We also got to know Daniel, an 8-year-old boy from Haiti who was staying with his family at the Respite Center. He presented our group with a drawing he made from memory of the PHJC Volunteer Program logo, which he saw on our t-shirts the previous day. He was a delight and peacemaker among the other children, as older kids often are. Before his family departed for Florida, I told him God loved him and so did I. I wished him a great life, and implored him to keep honing his artistic talent. If every church that could sponsor a family in the tent cities that has no one in the United States, we could clear the camps, reunite families, and work toward better polices regarding immigration and treatment of the poor. That would truly be a “God” moment.