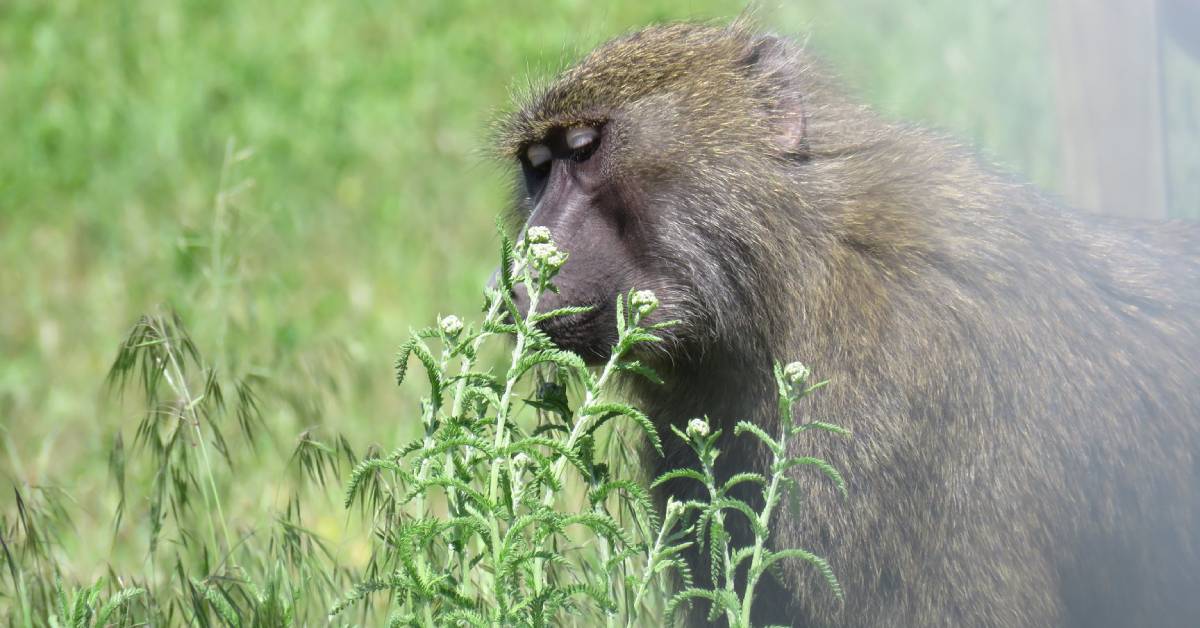 So, you’ve seen and heard about friendly reserves for wildlife to roam in wide-open spaces while being fed, cared for, and socialized, but did you know one of these safe havens is located right here in Indiana?

Located at the end of a dirt road surrounded by endless flocks of trees in Winamac, Ind., the Peaceable Primate Sanctuary provides an enriching and stimulating permanent home for primates retired from research and rescued from the pet and entertainment industries. The facility is the only one of its kind to reside in North America.

Scott Kubisch, Founder/ Director of Peaceable Primate Sanctuary, had envisioned opening the non-profit organization since he was a boy, daydreaming about ways he could do his part and stay true to his passion for wildlife.

Kubisch’s great grandparents had a farm by English Lake near North Judson, which later got passed onto his grandparents.

“I never actually lived there, but my family would come out and visit on weekends and holidays, and once I started looking for properties for the sanctuary, I was familiar with this area and decided to run with it,” Kubisch said.

The sanctuary received its first primate in 2016, but Kubisch and other supporters had been working on getting the facility running for about 15 years. Now, the sanctuary stretches across a whopping 78 acres, allowing 33 primates – and 11 more coming within the next two months – to move as freely as they choose.

“I’ve always been very earth-friendly, worried about the environment and caring for animals. As a child, I would always bring home stray dogs, sick possums, baby birds, and other things,” Kubisch said. “I knew I always wanted to work at a zoo when I got older.”

Kubisch’s first animal-related job was at the Brookfield Zoo in Illinois where he stayed for about six years. He then moved to Lincoln Park Zoo in Chicago for 21 years. Kubisch worked with baboons at both facilities. “When I worked at the zoo, I enjoyed it, but I always wanted to do more and make a difference. Being able to open a sanctuary and provide retirement to lab primates has really allowed me to fulfill my lifelong dream,” Kubisch said.

The sanctuary does not take a stand for or against the act of using chimps for research in a lab setting. Rather, they work hard to provide primates with a place for retirement once they are out of research.

“We understand the need for research but are true believers that all these animals deserve a place to retire,” Kubisch said. “We work closely with Princeton and Yale University and have implemented a retirement program for both in which they can send their primates to the sanctuary once their research studies are done.”

Princeton, along with Yale University, decided to partner with the sanctuary to ensure both schools can seamlessly retire more primates there in the future. It’s a sign of increasing interest in sending former research primates to sanctuaries instead of euthanizing them or transferring them to another project.

According to Science Magazine, a growing number of scientists say retirement is the right thing to do for these social, intelligent creatures.

“We want to do right by these animals,” said Peter Smith, associate director of Yale’s Animal Resources Center. “It’s good for them, and it’s good for the people who have spent their time caring for them.”

There is no specific age that the primates enter retirement, but there is, however, a wide array of new experiences, friends, food, and nourishment still to be had during the remainder of their lifetimes. In fact, Kubisch’s favorite aspect of his job at the sanctuary is watching the new retirees experience new things.

“Many of these primates have never seen the outdoors. They have spent most of their lives in cages within laboratories, so when they get here, it’s really sort of a shock to them,” Kubisch said. “They experience rain, sun, the wind blowing, birds flying and chirping overhead – it’s all very new to them. I’ve been able to experience every primate’s initial introduction to the sanctuary, and it has been such a joy to witness.”

One specific memory Kubisch will never forget is when Jerry, one of the sanctuary’s first retirees, was introduced to his new living space.

“Jerry was extremely hesitant to come outside at the beginning of his stay. It took him some time, maybe a few hours even, before he ventured outside. He was very tentative, placing maybe one hand and foot out at a time and poking and touching the dirt before retreating to where he started. But when he did come outside and began to adjust, it was such a nice moment to witness.”

The primates at the sanctuary spend their days doing a multitude of activities while being cared for by staff members and volunteers.

“Think of it as a retirement home similar to the places humans experience,” Kubisch said. “You relax, catch up with your friends, lounge around a bit, lay in the sun, entertain yourself, play with others, amongst other things. They can just simply be primates.”

Most of all, Kubisch is proud to see the impact the sanctuary has made thus far and its potential to continue to do so for years to come.

“We’ve built a sanctuary here that is going to last for as long as it’s needed,” Kubisch said. “As I get older, I find comfort knowing that the sanctuary is set up to keep running long after my lifetime, and I’m very proud of this.”

In order to keep the primates’ top-rated retirement home operating, the sanctuary relies on private individual donations, and funds from estate plans, foundations, fundraisers, and partner universities. Each year, the sanctuary opens to the public for its annual Baboon Fest fundraiser in October and Fiesta de Monos in the Springtime. For updates and more information about these events, visit the sanctuary’s Facebook page. To make a donation, click here.

Volunteer opportunities are available at the Peaceable Primate Sanctuary. Interested volunteers are encouraged to check up regularly on the sanctuary’s Facebook page for updates about orientation in the future.

There are also private tours available for small groups who are members at the sanctuary. Those interested are encouraged to call the sanctuary at (574) 896-0590 or visit https://www.baboonsanctuary.org/ for more information.