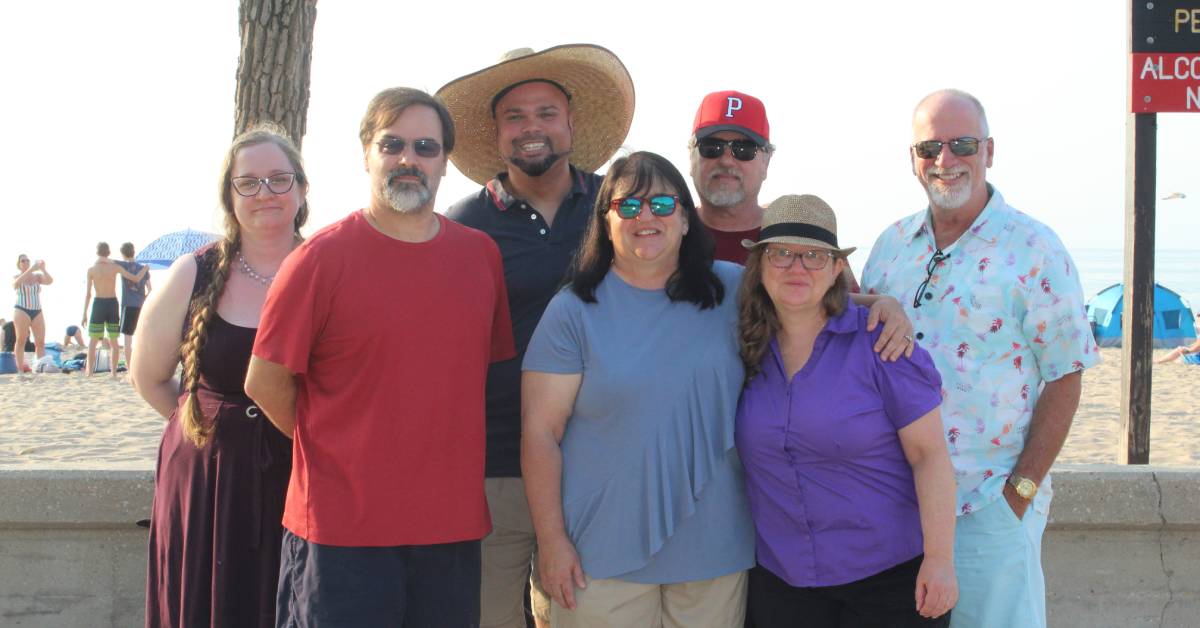 “I’m excited we get to perform in front of people and draw them in with the pure joy of improv,” said improv artist Lisa Szanyi. “Sometimes we draw people in and they can’t walk away.”

After some vocal warm ups, The Tony Stanzas, under the direction of Nelson Velazquez, took suggestions from the audience. Music Director Dan Pritchett played background music that echoed the actor’s emotions. Before the crowd’s eyes, a brand new, one-of-a-kind musical comedy was born. Szanyi hopes to show the community that quality improv is alive and well in the Region, and is a style of theatre anyone can enjoy.

Szanyi’s husband, Ron, also a member of the improv group, enjoys showcasing his craft outdoors because of the unpredictable elements. On Thursday evening, occasional interruptions such as boats passing, children laughing and the chatter of seagulls added to the performance. Ron welcomes the noise. In fact, during a previous show, a flock of birds attacked the improv group and became part of the narrative.

“I like being spontaneous and performing outside as an improv artist, because you can play off of it,” Ron said. “Things generally don’t go as expected.”

For Ron, Park Plays is a great way for the community to realize that Northwest Indiana has a vibrant art scene, and a trip to Chicago is not necessary to experience good entertainment. He has witnessed growth within the theatre community and is proud to be a part of Northwest Indiana’s theatre scene.

“I love when audiences realize that our shows are truly made up on the spot and that each show is different,” Ron said. “When I hear that laugh or surprised gasp, for me, that’s a big moment.”

According to Angela Heid, Vice President of NIETF and Sound Director of The Tony Stanzas, there are 20 theatres within three Northwest Indiana counties, not including schools and universities. With all of those stages, there are tons of ways to be involved. From being an audience member, to auditioning or working behind the scenes, there are a lot of productions looking for people to be involved in this art form.

“We have a thriving theatre scene, and it’s all very different types of theatre that the groups do,” Heid said.

Heid noted that Park Plays was made possible by generous grants from Indiana Tourism and Indiana Arts Commission. The idea behind Park Plays is to bring theatre to the community in unexpected ways. Up next is Gary Shakespeare Co. with their rendition of Othello on August 1.

For more information about the free live art shows on select Thursday evenings this summer, check out http://nietf.org/park-plays/.