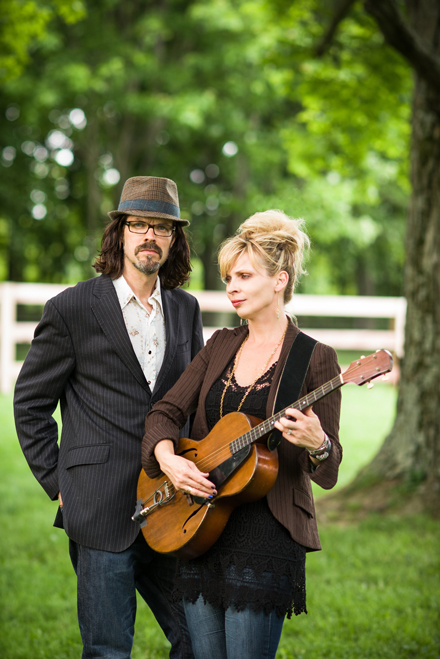 There’s something incredibly refreshing about a band that creates beautiful music and is so invested in their time being alive and what they can do with those years. Husband and wife duo Linford Detweiler and Karen Bergquist, who make music under the moniker Over the Rhine, are two people that seem to be the artists who truly gives weight to the word - people who make their music as they live and breathe it.

First formed in 1989 as a three piece, they have been steadily making records for the past two decades and will soon be making their stop in Northwest Indiana for the first time. Linford, pianist and guitarist of Over the Rhine, joined me for this interview to talk on their decision to make their music in peaceful seclusion, how they contribute to American music, and what we should expect from their evening at the Memorial Opera House.

Tickets are still available to see Over the Rhine in Valparaiso. Click here to buy tickets!

Some artists keep their beginnings close to heart. Detweiler and Bergquist met in Ohio, and have pulled their inspiration from the state ever since. Over the Rhine takes their name from a neighborhood in Cincinnati where they got their start. Because of their love and dedication to their home, it’s easy to see why the group has been striving in their area for years. It’s also because of that strong bond between them and the Cincinnati scene that they’ve settled their roots close.

For the past few years they have made their music within the confines of their home on a farm in rural Ohio. Since making a place in that community they have also built a barn as a community arts center and have played gigs solely for the fans that have supported them in the area. That alone is something that is different from their artist peers that live and thrive in New York City or LA, where Linford explained that they could’ve “eloped to” many years ago as young musicians but decided to make their stance within the comfortable familiarities of their home state.

“Karin and I moved 45 miles East of Cincinnati about a decade ago. We love touring from city to city but we were hungry for a piece of unpaved earth to call home, a refuge from the road where we could regroup, see the sky properly, take a few deep breaths,” Detweiler stated. “We found an old fixer-upper farm with a house built in 1833. We found a home. A sense of place and home has been integral to our music for years. I think that might be the basic underpinning of all human longing – just trying to find a place that feels like home. For us, that’s Ohio. I think as writers we wanted to be rooted somewhere where we had some personal and family history.”

Over the Rhine, if you take a listen to any of their catalogue, plays out like a calm and ethereal stream of music that flows like their namesake of the Rhine River - which is something that Detweiler compares to himself. The category of their music isn’t easily defined, but Detweiler said that’s because of their dedication to making American music; a music that can’t be held and restricted in a box because of its ever changing plethora of sounds.

“There is so much music that could only have happened in America. We often forget about this, but music is one of America’s great treasures,” Detweiler stated. “We forget that our diversity and all of us as immigrants bringing our various cultures to this place is part of our heritage and strength. Italy, as alluring as it may be to a young artist, could never have given the world Johnny Cash. Ragtime, Jazz, Bluegrass, Gospel, Country and Western, Rock and Roll – these grew out of the messy melting pot and stew that is America. We obsess rather in trying to divide each other into different camps – politically, racially, economically, insiders and outsiders, etc. Music can still get us all back into the same room talking to each other.”

Like the concept of American music itself, Over the Rhine is ever changing. Still, they feel like they have music to contribute to the world and ability to be held in high regard amongst their songwriting peers as the music they make goes on. Detweiler explained that because there’s still music to be created with their time here on Earth and that, “Some of the best music is made by people well over their 50s.”

“A record we make now after being called upon to bury loved ones for instance, is going to be coming from a much different place than a record we made in our twenties,” Detweiler stated. “We believe you can hear all different strains of American music flowing like a river through the music of Over the Rhine. All this music that we grew up with gets filtered through our personal experience and history, and then gets stirred into something that hopefully feels both brand new and a little timeless.”

That timeless sound will soon be played in the confines of a time defying stage. On September 19th Over the Rhine will make their stop at Valparaiso’s Memorial Opera House as a part of the Imagine Music Concert Series. The concert is being billed as “An Acoustic Evening with Over the Rhine” that will take place in a venue that seems like the most appropriate place to experience their music. The two will be presenting a low-key, beautiful evening for anyone interested or invested in music to experience. They will be joined by multi-instrumentalist Bradley Meinerding, forming a trio and will bring a new dimension to their two-piece songs. In all Detweiler explained that it’s a privilege to be a part of something so unique and extraordinary to our area.

“So many old theatres and halls have disappeared from our small towns. We are always extremely grateful to groups of people who work together to restore and preserve these historic places. Often you walk on stage and it feels like sacred ground. So many ghosts and echoes. So we are grateful for the opportunity,” Detweiler said.