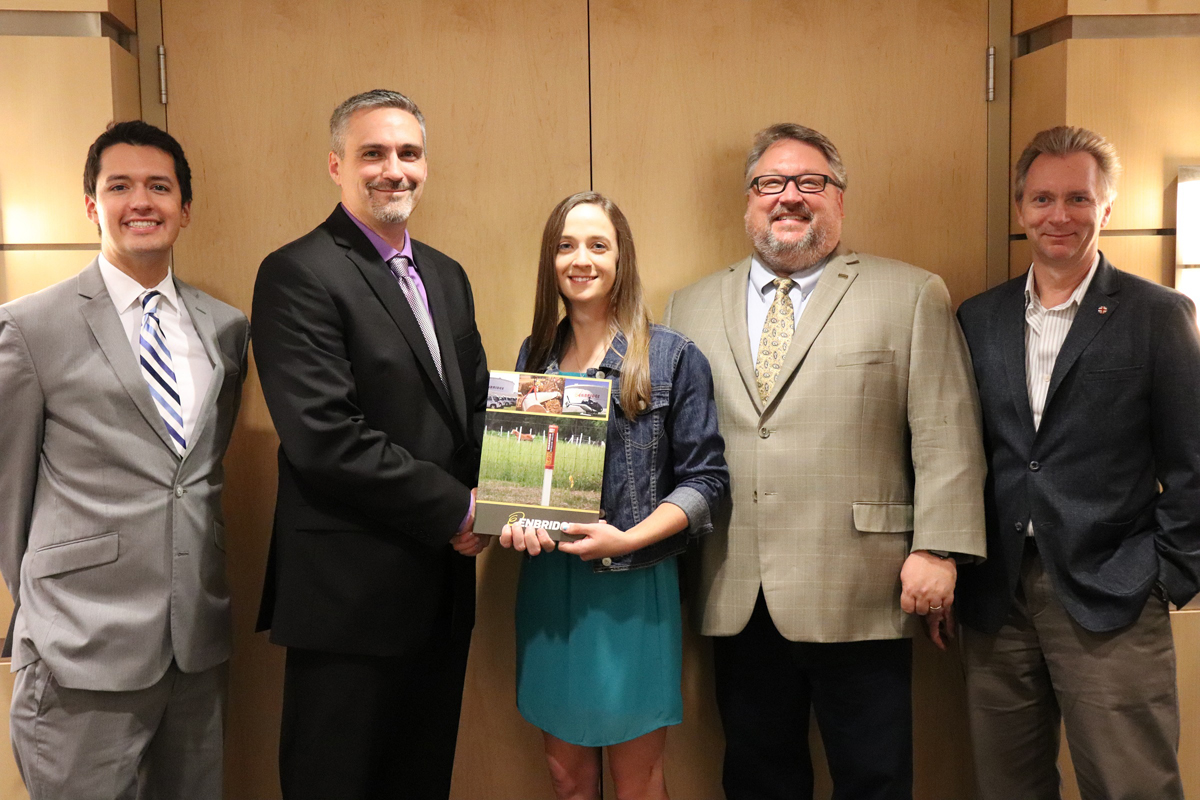 Purdue University Northwest (PNW) student Sydney Valiska was drawn to the field of civil engineering from a very young age. “I was never a big fan of playing dress up or having tea parties, but instead loved building with Legos and doing puzzles.”

The New Lenox, Illinois native was awarded the Enbridge Future Leaders Scholarship, a well-deserved recognition for the active second-year student. Along with being an engineering scholar at PNW, Valiska is involved in the American Society of Civil Engineers and the Society of Women Engineers. She also just finished her second season as a member of the Purdue Northwest NCAA Division II Women’s Golf team.

“Enbridge is proud to be continuing our partnership with Purdue University Northwest to create this scholarship promoting engineering, a field of study that is widely used in the pipeline industry,” said Dave Bareham, area manager at Enbridge, Inc., a global leader in energy infrastructure.

Following in her mother’s footsteps
Valiska’s passion for engineering was instilled by her mother, who passed away in a car accident when Valiska was two years old. Growing up, she listened to her father’s stories about her mother’s work as a civil engineer. “I knew that one day I wanted to do the same,” said Valiska.

Valiska’s love for her mother pointed her toward top-tier engineering schools within the Purdue University system; her golfing talent influenced her choice to attend Purdue Northwest.

“My high school golf coach at New Lenox introduced me to PNW. My father also said my mother attended Purdue’s main campus in West Lafayette,” she said. “Purdue Northwest was very welcoming and I knew I would get a great degree.”

After a preview visit where Valiska talked with directors in the School of Engineering, faculty advisors and athletics coaches, she felt at home at Purdue Northwest and now lives in residential housing at PNW’s Hammond Campus.

As a PNW School of Engineering student, Valiska has already applied her skills to such projects as designing staircases and bridges. “I do like how all the professors are willing to give their time here,” she said.

Resilient and optimistic
Being a civil engineer specializing in either transportation or environmental engineering is Valiska’s dream. Her scholarship was not only relevant, it was also timely.

Valiska’s father passed away in September after a year-long battle with brain cancer. Her family support includes her step-mother and two younger siblings—her brother, a first-year student at the University of Wisconsin-Eau Clair, and a half-sister who is a high school sophomore.

Losing both parents so early in life would understandably challenge anyone, but Valiska is as resilient as the bridges she plans to build in the future.

“We are especially excited to be making this award to a much-deserving woman like Valiska, who demonstrates the potential to be a future leader in whatever field she pursues,” said Bareham.

“Winning this scholarship is also building my self-esteem because it signifies the confidence others are instilling in me to keep looking forward with the same determination and optimistic outlook so that one day I can fulfill my dream of becoming a successful civil engineer,” she said.

About Enbridge
Enbridge Inc. is North America’s premier energy infrastructure company with strategic business platforms that include an extensive network of crude oil, liquids and natural gas pipelines, regulated natural gas distribution utilities and renewable power generation. Enbridge has ranked on the Global 100 Most Sustainable Corporations index for the past nine years. More information about Enbridge Pipelines can be found at www.enbridge.com.