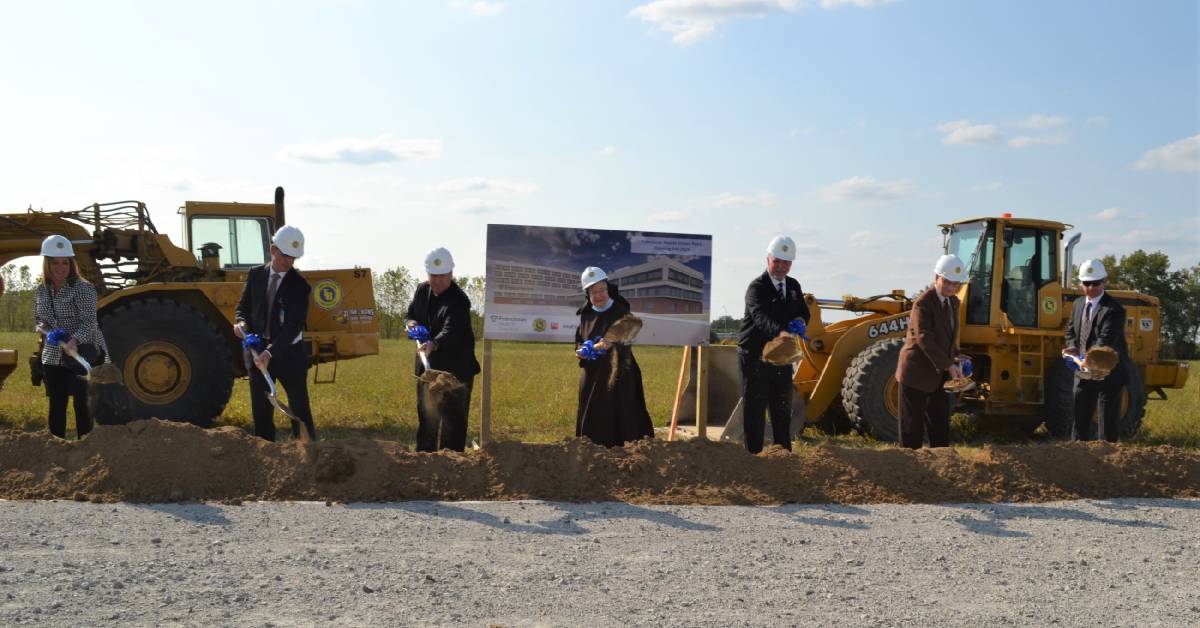 Officials and dignitaries plunged their shovels into the dirt along Interstate 65, marking the start of a project that will bring a new Franciscan Health Crown Point hospital, part of a 500-plus-acre development that will transform the city’s southeast side.

Sister Jane Marie Klein, OSF, chairwoman of the Franciscan Alliance Board of Trustees, said, “God has blessed us with this beautiful day for groundbreaking for our new Franciscan Health Crown Point, which will enable us, once again, to continue Christ’s ministry in our Franciscan tradition by providing state-of-the-art healthcare services to the citizens of Crown Point and the many surrounding communities.”

Franciscan Health Crown Point President and CEO Daniel McCormick, MD, noted that the location was not just about a new hospital. “The vision includes an expanded comprehensive medical and educational center for Crown Point and the surrounding counties. The new hospital and the current expansions of both the University of St Francis and the Franciscan Point facility are just the beginning,” he said.

The $200 million hospital is the centerpiece of the project at the southeast corner of I-65 and U.S. 231 that will include the expansion of Franciscan Health Franciscan Point and a doubling in size of the existing University of St. Francis campus. Approximately 250 acres is reserved for residential development, and Tonn and Blank Construction will be developing an additional 80 acres for commercial use. A 60-acre parcel will serve as a potential home for a new Catholic high school by the Gary Diocese Schools.

“The sisters are undertaking this major project in an uncertain time,” said Cal Bellamy, chairperson of the Franciscan Alliance Northern Indiana Board of Directors. “But they have confidence in the future of the City of Crown Point and a deep commitment to all of Northwest Indiana.”

Crown Point Mayor David Uran underlined the job opportunities that come from education and healthcare, both of which are part of this development. “This is to me, as mayor, the beacon of quality healthcare that really resonates across the board. That’s the commitment that Franciscan Health has made, not only years prior, but for decades going forward, and that should be applauded,” he said.

Diocese of Gary Bishop Robert McClory performed the blessing for the site, saying “What a great privilege it is to be able to honor the Sisters, Franciscan Health and to be able to see something growing that spreads the love of Jesus to a world that so much needs love.”

In concluding his remarks, Dr. McCormick said, “As we bless and celebrate this groundbreaking, please know that we are honored to be playing a lead role in caring for people of this region while further strengthening our community.”

The current Franciscan Health Crown Point hospital at 1201 S. Main St. will continue to provide outstanding healthcare for the community as the new site is developed. Franciscan Alliance is exploring future uses for the present facility after the anticipated opening of the new hospital in fall 2023.