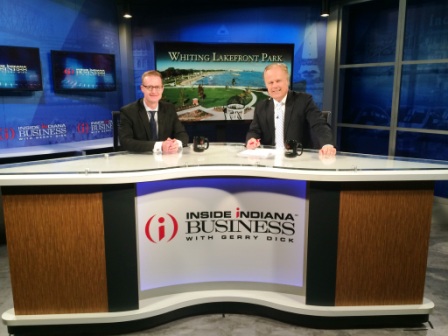 Whiting Lakefront Park featured statewide while East Chicago starts another project
Regional Development Authority President and CEO joined Inside Indiana Business' Gerry Dick this past weekend to discuss the transformation of the Whiting Lakefront Park into a lakeshore destination for Northwest Indiana. The project, fueled by $22 million in RDA grants, has attracted tens of millions more in local, federal and private investment in Whiting, including a new baseball stadium, new residential and retail development and infrastructure upgrades. Watch Gerry and Bill discuss the Whiting Lakefront Park and its broader implications for the region and the state of Indiana here.

Whiting isn't the only Northwest Indiana community looking to leverage its location on the lakefront. Less than a month after breaking ground at Jeorse Beach, East Chicago officials kicked off another project in their revitalization program at the corner of Main Street and 138th. The new Unity Plaza project is one of several similar initiatives around East Chicago aimed at strengthening the community and encouraging economic development. Watch Mayor Anthony Copeland and Bill Hanna talk about the opportunity here.

These efforts are among the Marquette Plan projects the RDA has funded in Whiting, Hammond, Portage, East Chicago and Gary. Overall, the RDA and lakeshore communities have invested more than $200 million in the Lake Michigan shoreline since 2006. Over the next ten years, these investments are projected to generate more than 1,000 jobs and will add $93 million a year to the region's total economic output by 2025.