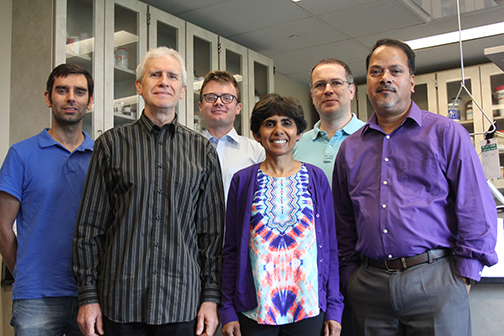 Indiana University School of Medicine–NW-G (IUSM-NW-G) researchers discovered that a group of proteins that act as the body’s built-in defense against bacteria use a molecular trick that trigger bacteria to destroy themselves.

When the discovery was announced, researchers said the mechanism by which this occurred was unknown, but that understanding exactly how this happens could potentially lead the way toward developing new methods for prevention and treatment of bacterial infections.

The National Institutes of Health (NIH), which funded the research for the 2011 discovery, recently awarded IUSM-NW-G Principal Investigator Roman Dziarski, Ph.D., and his team a new grant, in the staggering amount of $1.5 million, to study this mechanism over the next four years, punctuating the groundbreaking significance of the promising research being conducted in the IUSM-NW-G laboratory.

Dziarski explained that the initial discovery was made from research on antibacterial proteins produced by human immune cells called Peptidoglycan Recognition Proteins (PGRPs). The team was searching for new antibacterial agents and new ways to kill bacteria without toxic side effects for patients.

Peptidoglycan is the main component of the outermost layer of bacteria and a well-known target of antibiotics, because the antibiotics inhibit peptidoglycan synthesis in bacteria. Without peptidoglycan, bacteria cannot survive. However, over the years, bacteria have developed resistance to this inhibition and can survive in the presence of many antibiotics.

“In our research we discovered that human PGRPs bind to peptidoglycan in bacteria,” Dziarski explained. “However, instead of inhibiting peptidoglycan synthesis (as penicillin and other antibiotics do), PGRPs use a molecular trick to induce bacteria to destroy themselves. The trick is that bacteria cannot dislodge PGRPs, and as they try to do this, they become more and more stressed and eventually use up all their energy and die.

“But how exactly this happens is not known,” Dziarski continued. “Thus, the aim of this newly funded research project is to answer this question and solve the biochemical mechanism for how bacteria treated with PGRPs kill themselves … so in the future we can design simpler drugs that use the same trick to kill bacteria.”

Dziarski emphasized that despite the availability of numerous antibiotics, vaccines, and modern life-support therapies, bacterial infections continue to be a major cause of morbidity and mortality. Infections are difficult to prevent and treat, he said, because they are often caused by bacteria that are resistant to multiple currently available antibiotics.

“The discovery of new antibiotics has in recent years substantially slowed down and the available antibiotics have become increasingly difficult to improve,” he said. “For these reasons there is a need to discover alternative approaches to prevention and treatment of bacterial infections, to find new types of antibacterial agents, and to identify new mechanisms that can kill bacteria or prevent bacterial infections.”

This is Dr. Dziarski’s 10th research grant from NIH to investigate innate immunity to bacteria.

“We are extremely fortunate and honored to receive this grant, because obtaining funding from NIH is extremely difficult and competitive, and only the highest quality research with novel ideas and high potential for future application to improve health care receive NIH funding. “

The grant will pay for all the research expenses, including all research materials and supplies and salaries of faculty and scientists working on the project.

Dziarski and his team will also recruit undergraduate students from IU Northwest to work on this project. Dominik Kowalczyk has already begun working in the laboratory this summer.

The main faculty investigators working on this project with Dziarski are Des Kashyap, Ph.D., Research Associate in Microbiology, and Dipika Gupta, Ph.D., Associate Professor of Biochemistry and Molecular Biology, both of IUSM-NW-G.

Two additional scientists, Ascención Torres-Escobar, DVM, Ph.D., and María Dolores Juárez-Rodríguez, Ph.D., who previously worked at the University of Louisville and Arizona State University, will be joining the research group in September.