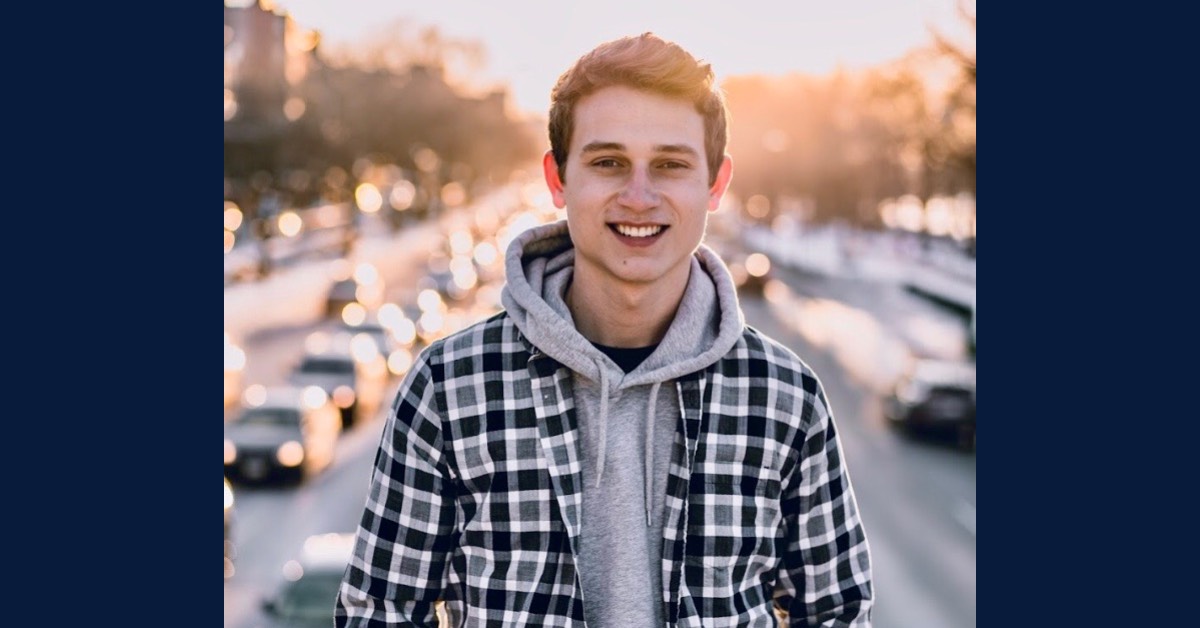 As an upcoming senior in college, Christopher Peters lives a typical busy student life studying for classes, working, and doing what he loves. However, Peters is a bit unique in that he’s not only studying at Berklee College of Music in Boston, Massachusetts, but he’s also studying one of the most unique majors that exists: musical theatre writing.

Getting a degree in musical theatre writing is something that Peters had not considered before attending Berklee, but once he discovered its availability and the exciting future it could propose for him, Peters was all in. Combined with his two majors – music production & engineering and songwriting – Peters is pursuing quite a few talents with his education.

Studying on the East Coast away from his hometown of Highland, Indiana means that Peters is an out-of-state-paying student. Naturally, when he saw his former teacher Benjamin Leonard-White, Highland High School orchestra teacher and Northwest Indiana Excellence in Theatre Foundation (NIETF) scholarship liaison and school & youth theatre representative, share about a scholarship being offered by NIETF, Peters was quick to apply.

“I saw my high school orchestra teacher tag a bunch of kids in a post on Facebook about applying for the scholarship, and I wasn’t sure if it was for me because I am already in my undergrad, but I said, ‘Let’s see what happens,’” said Peters. “I applied and here we are.”

When Peters received the email that he was the chosen recipient of the scholarship, he was first surprised then full of excitement and gratitude.

“I don’t want to say that I forgot about it, but it was a nice little surprise when I opened the email. It was quick enough to where it was still in mind, but it had been a few months since I sent my application,” said Peters. “It was cool because I was home with my family in the Region when I opened it.”

NIETF’s scholarship provides $500 to students looking to cover the costs associated with their postsecondary education. It is open to residents of Lake, La Porte, and Porter County who are high school seniors or undergraduate students pursuing a degree in fields like theatre, fine arts, dance, or visual and performing arts to name a few. NIETF holds strong motivation to promote excellence in theatre throughout Northwest Indiana, and this scholarship is just one mechanism of the organization’s support in action.

Leonard-White shared his perspective on the importance of the scholarship and the lasting impact it has on not only the recipient, but all individuals in the community who have an interest in theatre.

“Our scholarship is not meant to only award excellence in our young performers who plan on continuing performance, but also to bring our community’s school theatre programs closer together,” said Leonard-White. “This scholarship program is a focused way of acknowledging that excellence in those who participate in their school and community theatre programs before continuing those studies in postsecondary work.”

Attending Highland High School, Peters was heavily active in Highland Theatre Company during all four years, making him a prime candidate for the scholarship. During those days, you could find him shining both on and off the stage as he participated in productions as an actor and a member of the orchestra.

“I acted and played violin and guitar, so I was not only on stage at Highland but also in the pit orchestra,” said Peters. “I did some shows with Memorial Opera House in Valparaiso and played guitar at Hobart High School as well. I loved being in the big musicals that we did at Highland like ‘Hairspray’ and ‘Les Misérables.’”

Though he is a dynamic and passionate member of the theatre community, Peters did not expect to be chosen since he is a bit different from most applicants. With his degree focusing predominantly on writing and other uncommon areas like production and engineering, Peters figured he was unlike the majority of students who were seeking support for their interest in performing on stage.

“People say anything in the theatre or entertainment industry is risky, but I feel like it’s even riskier to be a writer for theatre,” said Peters. “I think Berklee is one of the only places that has theatre writing for a minor, so it’s a very new thing. I just think it’s really cool to have that support from NIETF.”

For Peters, the scholarship functions as much more than financial support. It outlines NIETF’s and the greater theatre community’s support and encouragement of his studies and future career goals as a writer of musical theatre.

“Getting the scholarship, to me, means that they see what I want to do and also want me to pursue that, so it’s really nice to have their support,” said Peters.

Support for dreams of every kind pursued by any individual is not a new concept to Peters, though. Being in the theatre community means you are surrounded by like-minded people who want everyone to succeed regardless of their race, ethnicity, gender, ability, sexual orientation, or any other aspect of their identity. Peters noted how increasing diversity and shining the spotlight on underrepresented demographics is one of his favorite parts of being involved in theatre.

“I just love the all-inclusive nature of theatre. The whole idea is letting anyone who wants to join to be a part of it,” said Peters. “Shows are always trying to reach certain demographics that haven’t had much of a say before. For example, Hamilton is all about casting people of color. This past semester, I took the second round of theatre writing classes here at Berklee, and we had to actually create a show. The demographic I wanted to portray was the elderly, which is interesting, but my whole show takes place in a nursing home, and it’s the perfect representation of anybody who is disabled or older because they are not included as often.”

NIETF reflects that same notion of support for diversity, equity, and inclusion. Leonard-White discussed how his position as scholarship chair allows him to strengthen theatre throughout the community, especially in young individuals who are going to shape the future of theatre.

Peters emphasized his appreciation for those who helped him to earn this scholarship and their support of his dreams.

“I received a letter of recommendation from my high school director, Benjamin Leonard-White, and another from a teacher here at Berklee, Rene Pfister,” said Peters. “I also want to thank Matthew Domasica and David Markley who are with Highland Theatre Company. I couldn’t have done it without all of them.”

To learn more about Northwest Indiana Excellence in Theatre Foundation, visit its website at nietf.org.