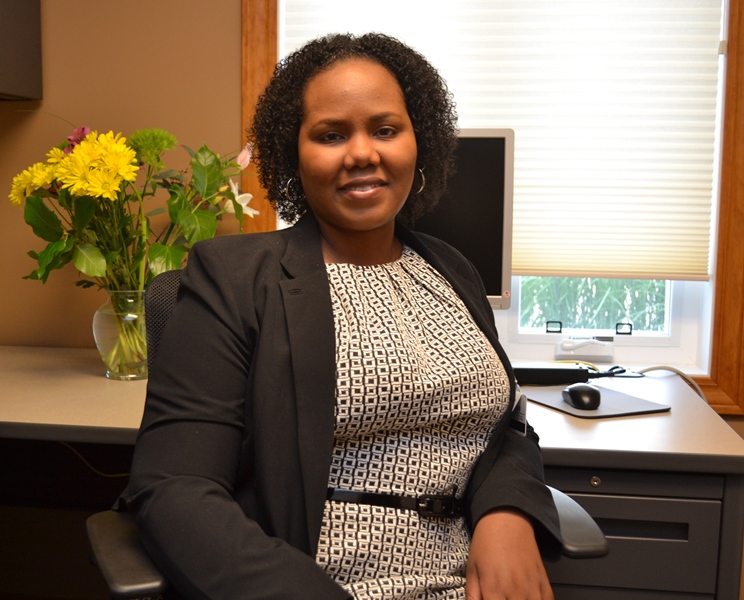 Little did TaShena Melton know when she was a 17-year-old resident of St. Monica Home that she one day would be its manager.

“It’s amazing; God chose me to come full circle and brought me back here,” she said recently, after starting her new role in late June. “This is a dream job I thought I’d never have. I was happy where I was (working at another residential care facility for youngsters) but this was St. Monica, the program that drove me to do the work I want to do.”

Melton, said she learned of the position through a coworker at her previous job.

“I applied around May 4, and received the job offer on May 22,” Melton related.

When Melton arrived as an unwed mother-to-be in 1996, St. Monica, located on the campus of Franciscan St. Margaret Health-Dyer, had opened two years earlier. Melton said her mother had encouraged her to take advantage of the program, which offers a medically sound and emotionally healthy residential environment for young women aged 12 to 21, who are awaiting the birth of a child or have recently given birth.

Melton said her now 18-year-old son was the first boy born of a client there. Years later, she had two girls. She, her husband and their daughters are in the process of moving to Merrillville.

Melton learned a lot, in more ways than one, in the nearly one year she spent at St. Monica. Staff members drove her to and from her home high school of East Chicago Central, where she was an honors student, so she could complete her senior year.

Melton said St. Monica gave her the tools to help her succeed, though she didn’t initially plan a career in social work.

“I learned how to set up a household; to menu-plan and shop on a budget. I learned to defer my needs for those of my son. The philosophy and care here is based on the residents, who are taught how to rectify poor decisions they made. The staff cares day in and day out about helping them learn to become better mothers.”

Her interest in social work later blossomed when Melton had the opportunity to informally mentor young people and then “wanted to learn more, which led to the next step.”

Now, her experience as a client better enables her to deal with the residents.

“I am able to get past the brick wall of being told, ‘you don’t know what I’m going through, you know nothing about me, you’d never understand,’ because I do know and understand and I’m going to hold you to standards I know you can achieve,” she added.

“Too often, a lot of programs aren’t like St. Monica’s,” she noted, adding, “They don’t expect young moms to achieve; they almost are handicapped by everybody doing things for them. My philosophy is to empower them to do more, to aim for something higher. We expect our residents succeed in their lives.”