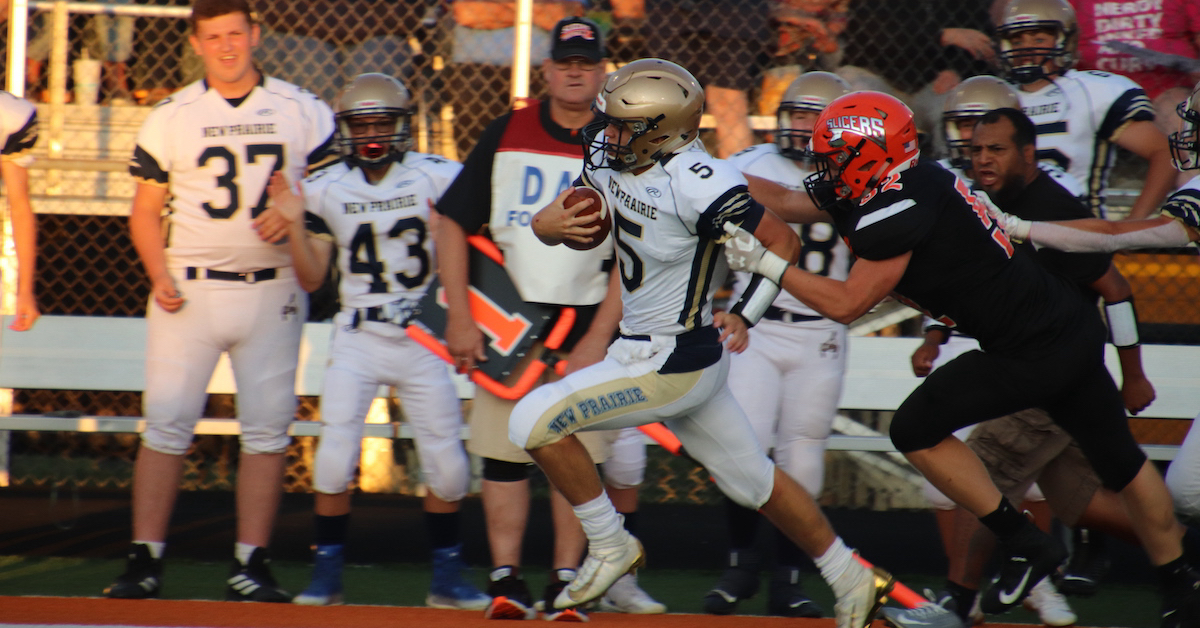 The La Porte High School Slicers hosted the New Prairie Cougars as football season kicked off across Indiana on Friday night. The stands were full, the band played on, and the cheerleaders from both sides performed a halftime routine that they had created together at camp. The Slicers fell 48-14 in their home opener, but saw some bright spots throughout the night to push forward through the season.

“It’s a great day to be a Slicer,” Head Coach Jeremy Lowery said before the game. “The kids and coaching staff have worked hard. It’s time to put it all together. This is a great group of kids and we know that they’re going to come out with a lot of energy and excitement, and we’re looking forward to seeing where they’re at. When the smoke clears, we know we’ve got the right kids in the room to get the job done, and we’re excited to show that to the community.”

The community cheered on their team, filling the home bleachers with Slicer orange. The student section celebrated the Northwest Indiana rivalry the only way they know how: dressed in denim overalls and waving stalks of corn.

The marching band opened the night with a march from the high school into the stadium. The student section cheered them loudly when they took their seats in the stands. Their halftime performance on Friday night was two numbers from their competition set Vegas, including Viva Las Vegas and Luck be a Lady.

A procession of Pop Warner cheerleaders and footballers crossed the field with their coaches at halftime, marking the home opener as a tribute to the football lifestyle. The young teams watched the game on the grass behind the Slicer end zone, cheering on those in the shoes they hope to one day fill themselves.

The idea that Cougar football fans travel well cannot be disputed. The visitor’s stands were overflowing, and fans lined up around the entire New Prairie half of the field. Their student section, painted in red, white,and blue fashion cheered the team as a whole, as well as players by name. Cougar running back Tayler Adams surely felt the support of his classmates every time he took the field.

“We’ve got a very young defense that’s going to be challenged at times, and we hope they’ll be aggressive tonight,” New Prairie Head Coach Russ Radtke said before the game. “We expect our offense to do a good job controlling the line of scrimmage, and hopefully the two things will work together.”

“We’re also going to find out how our special teams are working,” Radtke said, “because you don’t get much time to practice that during the summer.”

Indeed, for their first few touchdowns, New Prairie opted to attempt the conversion instead of relying on the kick for extra points. Although their first couple attempts failed, they finally converted for two and then moved onto the uprights.

“They have a whole new offense, new coaching staff, a whole new program,” Ratdke said of the struggle in preparing for the game, “We just have to worry about New Prairie tonight.”

The rivalry between the teams is friendly at heart. The taunts, though constant, are respectful and cooperative. Both teams looked good tonight at the start of their seasons, and both look forward to improving with every game. If you could pick your first game each season, this matchup would be tough to top.