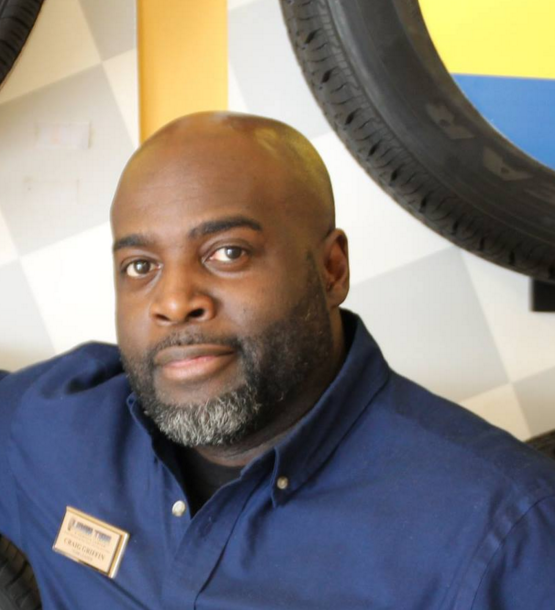 Levin Tire and Service Centers has a new Manager in Merrillville, and with that comes a new promise and commitment to treating its customers like family.

“Because everything is about family, always,” the new boss, Craig Griffin, told IIMM.

For Griffin, who brings with him over twenty-two years of automotive experience, a customer-oriented atmosphere in his shops has always been his top priority. And it’s this idea of putting the customer first that initially attracted him to Levin Tire.

“I came to Levin for the family atmosphere and the customer-oriented experiences they provide here,” said Griffin. “I live in Crown Point, and every day I would drive by the Levin in my area and it would catch my eye. Eventually, when I left my other job I talked to someone who used to work for Levin and he told me about their ideals and philosophy and they matched with my own.”

But it wasn’t just the commitment to customer service that attracted Griffin to Levin, it was also the company’s commitment to their employees that caught the attention of the Merrillville manager.

“I love how they treat employees like family here, too,” added Griffin. “I left my old job because they kept making me promises they did not deliver, and so far in my time here at Levin they have been on point with every promise they made.”

Even the little promises, which Griffin said mean much more than one sometimes thinks.

“I have been here just over two weeks and I already have my name tags and business cards. They took care of it just like that, and it feels good to know that they care that much and want to put you in the best position to succeed.”

And it’s that take care of one another philosophy that Griffin promises to bring to his time at the Merrillville Levin Tire.

“We’re going to be the place you can trust.”

Because, after all, trust is essential when it comes to family, and building a family is exactly what Griffin plans to do.