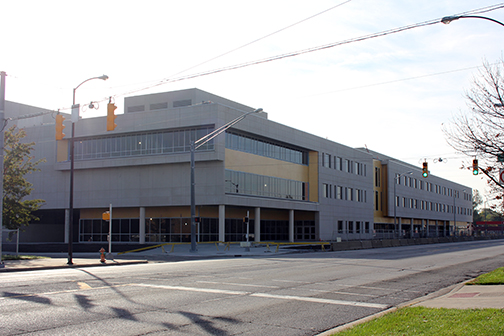 When the new $45 million Arts & Sciences Building officially opens in time for Indiana University Northwest’s fall 2017 semester, a diverse group of students who are pursuing degrees at both IU Northwest and Ivy Tech Community College will fill the halls and classrooms.

Half of the building will house IU Northwest’s fine and performing arts programs, as well as academic and administration space for the College of Arts and Sciences. Ivy Tech science programs and a “one-stop shop” for enrollment and admission services will occupy 30 percent of the building. The remainder will include classrooms and informal study spaces shared by both campuses.

The building’s inhabitants may be students at two different schools, but many share a single goal: to earn a bachelor’s degree from IU Northwest.

Jehmarius Johnson, 21, of Gary, is on his way to reaching that goal. A recent Ivy Tech graduate who completed his associate degree in an accelerated one-year program, Johnson is currently pursuing a bachelor’s degree in nursing at IU Northwest.

Thanks to the Dual Degree Program, a partnership between the two schools funded by the Kresge Foundation, Johnson was able to plan for future at IU Northwest while simultaneously finishing his degree at Ivy Tech. After four years of study, he’ll possess both degrees.

As a program participant, Johnson was guaranteed admission to IU Northwest once he earned his associate degree. In addition, he was able to take advantage of resources at his future university, including the IU Northwest library, career services, fitness center, computer, math and writing labs and more.

Two schools, one goal
Leaders at both campuses agree that this is the uniquely exciting part of co-opting space in the new building, located at the IU Northwest campus, just blocks away from Ivy Tech. The shared space, while offering cost benefits for both campuses, provides students pursuing an associate degree with a clear path to a four-year degree.

Studies show that students who complete an associate degree are much more likely to earn a bachelor’s degree, and in a shorter period of time.

“We are committed to helping students make the leap to a four-year university,” said Alexis Montevirgen, IU Northwest’s vice chancellor for student affairs and enrollment management. “Our goal is to ensure as many area students as possible earn a bachelor’s degree, resulting in a more educated and employable workforce. We believe this is the best way to contribute to the current and future health and prosperity of the community. In this way our partnership with Ivy Tech helps the entire region thrive.”

“When students enroll at Ivy Tech,” he said, “we want them to have their eye on IU Northwest right away. Sharing space and bundling enrollment services will encourage more of our students to enroll in the Dual Degree program and earn their bachelor’s degree. Not everyone is going to start at the same place, but they can finish across the same line.”