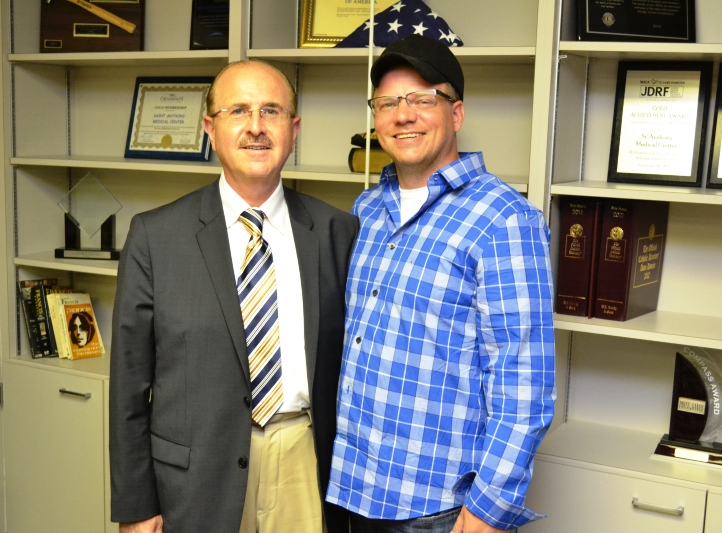 Hytham Rifai, MD, thought there was little hope of saving Peter Felus when Rifai encountered him at Franciscan St. Anthony Health-Crown Point on the morning of May 2.

“I didn’t think he would pull through, but he is young and healthy and his wife wanted us to do everything we could,” Dr. Rifai said of the subsequent successful neurosurgery he performed after Felus suffered a severe head injury that left him unconscious and in a pool of blood not far from his home here for hours, following an assault.

He was discovered by spouse Farren Felus as she was leaving for work.

Today, Peter Felus says, “I feel great and I’m ready to get out of the house,” as he recently celebrated his 33rd birthday and is on the road to recovery that also will mean again being able to drive, return to his information technology job, and enjoy guitar-playing and bicycle-riding, among other activities.

Blunt force trauma, believed caused by blows from a pipe and possibly kicks and punches inflicted by several attackers, caused a blood clot on the swollen brain’s surface that needed removal. The injuries also necessitated removal of the right portion of the skull to ease pressure caused by the swelling and for the brain to gradually relax, Dr. Rifai said. The skull was scheduled to be reattached in late August.

“He lost a lot of blood, but thank God his wife found him when she did and he was breathing when he got here,” Dr. Rifai said, adding, “He was very sick for a few days in the ICU after surgery, but he soon started to turn it around. We were able to extubate him and it wasn’t long before he was able to begin rehab at the hospital and later as an outpatient.”

Felus spent about a month in the hospital and recently completed outpatient treatment at the Rehabilitation Institute of Chicago at Franciscan St. Anthony Health Outpatient Therapy Clinic in St. John.

“The rehab staff was absolutely fantastic in every way,” he said, lauding the efforts of speech therapist Margaret Bazarko, physical therapist Omar Ferrario and occupational therapist Laura Yohnka. “I can’t say enough about them, they did so much in so many ways.”

He also thanked his wife “for finding me and being there through all this and giving me the space I need. She is fantastic.”

As for his surgeon, “What Dr. Rifai did speaks for itself – I’m still here,” Felus said.

Rifai said Felus “did remarkably well from beginning to end,” but refused to take credit, instead praising the hospital staff’s teamwork, the available equipment and the support of his patient’s family and friends.

“God guides us all in every case, every day, in every patient – that is how it works.”