Joakim Noah has had a rough couple of years. Following his awesome 2013-14 season - one in which the Bulls’ center won Defensive Player of the Year, was named All-NBA First Team and finished fourth in MVP voting for the season - Noah has struggled with injuries.

After hobbling through 67 games last season due to knee surgery, Noah has spent much of the 2015-16 season either hurt, recovering, or working his way back to the starting rotation. Last week, he dislocated his left shoulder and will be out for the next four-to-six months. With Noah’s contract expiring end at the of this season, it looks as though Noah’s time with the Bulls may be coming to an end.

And I hope it doesn’t. I love watching a healthy Joakim Noah play basketball. He hustles, he plays defense, he has a weird shot that is describes as a ‘tornado’. When his jumper goes in, I am almost doubly surprised because it just looks so off. He’s intense and always takes games seriously, whether they are in early November or the playoffs. He is a good player and, at the age of 30, I hope they can resign him to a reasonable contract.

But if they don’t, I thought I’d share my favorite 10 moments from Joakim Noah’s Chicago Bulls career (so far, *fingers crossed*).

Bulls - Celtics Game 6 Playoffs in 2009
I was actually live blogging what is widely regarded as the best Round 1 series ever, with the Bulls and Celtics in 2009. When Noah got a steal with about 40 seconds left in the third overtime, took the ball down the court and dunked on the Celtics’ Paul Pierce to take the lead, I about flipped out. 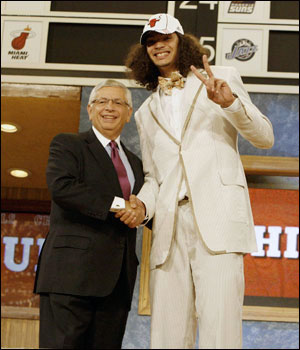 Clapping in Chris Bosh’s Face during the Playoffs
This makes me laugh every time.

Dancing
I am cheating on this one, I know - its from college. This is how Noah celebrated winning the National Championship on national television.

Random Favorite Noah Moment from this Season
He got annoyed with Tony Snell for not celebrating properly.

Feb 11, 2014 vs. the Atlanta Hawks
Chicago Sportsnet called this the best Noah game with the Bulls, but they got the stats wrong. I do remember watching it randomly though. The highlights give a good sample of what the guy can do when healthy.

Noah vs. LeBron/Cleveland
I love the internet for having a complilation all ready and made up for me.

Playoffs upset over the Nets
This series will likely be what Noah is most known for. With Derrick Rose out, Luol Deng in the hospital, and teammates like Carlos Boozer, Jimmy Butler (before he became JAMES Butler), Nate Robinson and Marco Belinelli, Noah led the Bulls to a first round, seven game series win over the Nets in 2013.