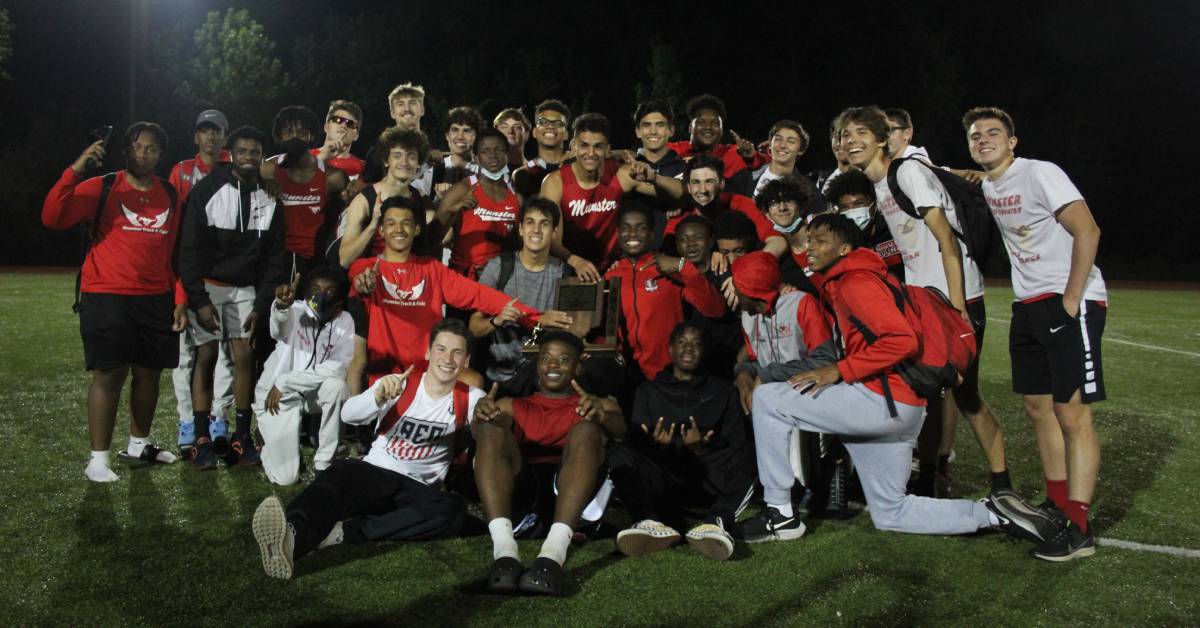 This year's Boys Track & Field sectionals had a late start to the evening, but made up for it with the incredible effort every runner put in. The boys were faced with one of the hottest meets they’ve seen this track season but the wind was on their side for the night.

The Munster High School Mustangs Boys Track & Field team continues to be undefeated as they take the title of champions for the Track Sectionals 2021.

“Sectionals is important to me because as a former athlete myself, I understand how it feels to be a sectional champion, and there's no better feeling for hard work,” said Munster Mustang Boys Track & Field Coach LaRence Crowder.

The East Chicago Central Cardinals hosted several schools around Northwest Indiana for the Boys Track & Field sectionals. The field events, discus, high jump, long jump, shot put, and pole vault began as the first race of the night started. Boys from all of the schools got ready for the first running event which was the 3200 (4x800) meter relay. The winners of this event, who are from Illiana Christian, included Trevor Eenigenburg (11), Logan Boersma (11), Nolan Bouwman (9) and Fritz Olthof (10) with a time of 8:56.97.

For Illiana Christian Boys Track & Field Team, this was their first time being at sectionals as they were on probation for two years as they expanded their campuses to a new location in Indiana.

“They've been able to step things up for sectionals. We've got some people moving on to regionals next week, and that's what we're hoping to do. They've accomplished it so far,” said Illiana Christian Boys Track & Field Coach Luke Fennema.

During the 100-meter dash, Calumet High School runner Justin Marshall finished first while beating a personal record  with a final score of 10.91. Marshall also got first place in the 200-meter dash. This is his first year competing in Track & Field.

“I'm very happy about Justin’s sectional championship in the 100-meter dash. I got some long jumpers that made the finals – I'm excited about those two,” said Calumet High School Boys Track & Field Coach Jerae Protho-Guider.

For some schools like Bishop Noll Institute, they had a smaller roster but made it up with the dedication and empathy in their hearts.

“Getting that opportunity to compete at one of the highest levels, is what the kids really worked for,” said Bishop Noll Institute Boys Track & Field Coach Eric Klocek. “They wanted to dedicate this year to the class of 2020 and everything was pretty much for all of those kids that didn't get that opportunity this year.”

Boys have been preparing for this meet all season. Especially with COVID-19 affecting many spring sports in 2020 and affecting the way they train and practice this school year, this is something that all schools took very seriously in preparation for.

“They persevered, showed up, and did everything they needed to come back from being quarantined,” said Griffith High School Boys Track & Field Coach Anthony Zarndt.

Sectionals are important for all runners as their goal is to qualify for regionals that will take place on May 27.

“Today is important because every one of our runners is making history just by being the first Track & Field athletes from our school to participate in a postseason meet,” said Fennema.

“It's a lot of love in our circle, it's a lot of support. We just wanted to come in today and treat it just like every meet and do what we always do – which is compete and leave everything out there and try our hardest,” said Protho-Guider.

For more information about the Boys Track & Field season, check out https://www.ihsaa.org/Sports/Boys/Track.