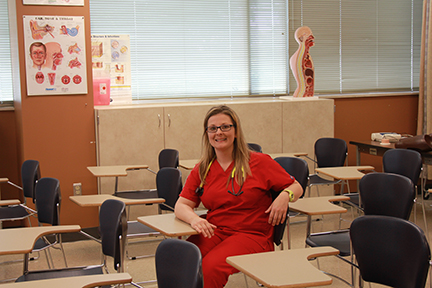 When Shelley Tinnel first enrolled at Indiana University Northwest, the year was 1998. She was a 17-year-old homeless teen who initially wanted to study criminal justice.

Today, 20 years and a degree-switch later, she is finally closing in her goal of a bachelor’s degree. Reflecting on her journey, she has learned as much about overcoming challenges, relying on others’ support, and the importance of supporting others, as she has about how to be a nurse.

Obstacles part of the journey
The homeless part of Tinnel’s story came because after a rocky childhood of moving from city to city as her father grew his scaffolding company, Tinnel decided it was time to come back home to Merrillville. But within two months of her move, Tinnel’s alcoholic mom was jailed for having multiple DUIs.

This left her living out of her car and crashing at friends’ homes, but she was determined to keep attending her classes. That lasted until she became pregnant with her first child, causing her to put her educational goals on hold.

Then came a birth, a marriage, and then, a second child.

Around 2004, Tinnel decided to come back to school and work towards her criminal justice degree once again.

Then came a divorce, second marriage and arrival of her youngest child, who joined a new blended family. These developments also meant a second hiatus from college.

Around 2012, Tinnel came back once more, and finally earned her associate’s degree in criminal justice, fully intending to press on toward her bachelor’s degree immediately.

“I am definitely going against the statistics,” Tinnel says. “They say if you drop out, you won’t come back. I stopped and came back, and this is my third time coming back.”

Around this time, life had thrown Tinnel another curve ball. Her son had fallen ill because of birth defects that had gone undetected and he spent a month at the University of Chicago Hospital. But this time, Tinnel remained in school, although her journey changed course.

“I became super involved in his care,” she explained. “I stayed in school - trucked right through it. I managed his care and I just kind of fell in love with nursing.”

Tinnel says that IU Northwest’s nursing program is among the hardest things she’s ever done, and even harder has been juggling her family commitments. She had to stop working altogether in order to succeed in her classes, so it’s been somewhat of a financial struggle as well.

A resident of Demotte, Ind., the now 36-year-old mother of five, who range in age from 18 to 11, gets emotional only when talking about the sacrifices that affect her ability to spend time with her teens and pre-teen.

“I feel like the world’s worst mom right now,” she says, patting away tears. “I feel like my kids understand though, and in one aspect, I am showing them that anything is possible if you are determined to do it, but I definitely miss out on a lot of stuff.”

A ‘village’ of support
Fortunately, she feels blessed that two scholarships were awarded to her, amounting to about a third of a semester of tuition. The Altrusa of Indiana Dunes Scholarship and a School of Nursing Scholarship came through just as the weight of missing her family was bearing down.

“The scholarships allow me to be a little less stressed,” Tinnel said. “The whole process of going to school, and being a parent, and working and trying to manage and juggle all those things, being able to have that gift of a scholarship - it’s a blessing.”

And with her oldest daughter pursuing an education degree beginning next fall, the help for a “two-tuition family” is even more appreciated.

Tinnel is a big believer in paying it forward, so much so that she has looked into the process of starting up her own scholarship once she is firmly established in her nursing career.

“At some point in my life, I would like to establish my own scholarship with my own criteria. For example, it might be for single moms or maybe someone going for nursing,” she said. “If we want to improve our future we have to look at the whole village, not just ourselves.”

Tinnel is now in her final semester at IU Northwest and plans to graduate in December of 2016, 20 years after she first enrolled. In addition to a bachelor’s degree in nursing, she will also hold the honor of being the first in her family to earn a college degree.

“It’s always been a goal of mine to have a college education,” Tinnel said. “Even at a young age, I wanted to have a college degree. But life happens and you have to take what you’re given and work around it. I never thought about not accomplishing it.”