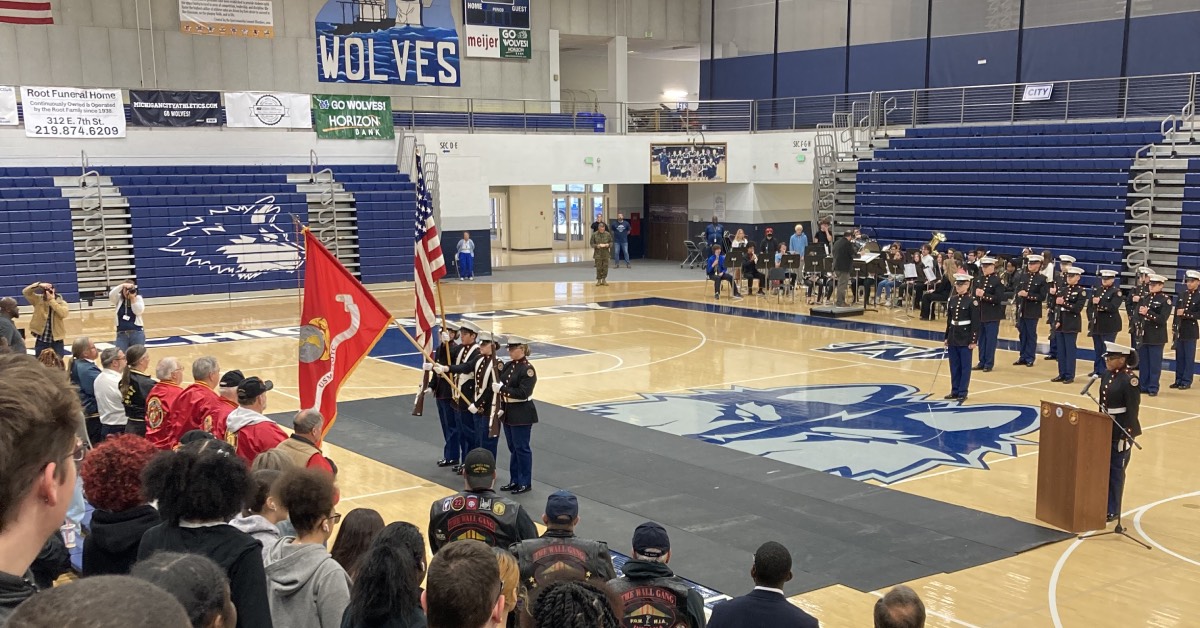 Michigan City High School (MCHS) conducted a ceremony to honor veterans on Veterans Day, November 11th. The school’s band, choir, and Marine Corps Junior Reserve Officer Training Corps (MCJROTC) participated. All junior and senior classes attended along with many veterans from surrounding communities. One highlight of the ceremony was the band playing the Armed Forces Medley, during which veterans of their respective service were recognized during the playing of their service song. The event was a modified military parade, with the march on of troops and the manual of arms. The choir sang the National Anthem, God Bless America, and America the Beautiful. It concluded with the troops passing in review.

The ceremony was live-streamed to freshmen and sophomore classes. Indiana State Senator Mike Bohacek was the guest speaker. Senator Bohacek emphasized the importance of looking out for our veterans, both their physical and mental health.

“It is a great testimony to the dedication of the members of our band, choir and cadets to put forth so much effort into the preparation of this ceremony,” said Senior Marine Instructor Major Tom McGrath. “I also want to commend the attentiveness of the student body. With less than one percent of our population serving in the military, many young people have no connection to the armed forces.”

Master Sergeant Jeff Benak, the Marine Instructor, noted the cadets’ flexibility and ability to multitask. “We conducted our Marine Corps Birthday Ceremony and marched in the Michigan City Veterans Parade last weekend. The cadets participated in the Michiana Marines’ ceremony last night, did this ceremony today, and we will host and compete in our military drill meet tomorrow.”

The Military Drill Team will continue to prepare for the Sectional Championship Meet at Portage on January 14th. If the Wolves finish in the top 3, they will compete in the Regional Championship at Reading, PA on February 19th. That trip, along with all MCJROTC activities, are done at no cost to MCHS or the cadet. They are funded by the Marine Corps. Cadets will also continue to support MCHS functions, including the One City One Sound holiday concert and all home basketball games.