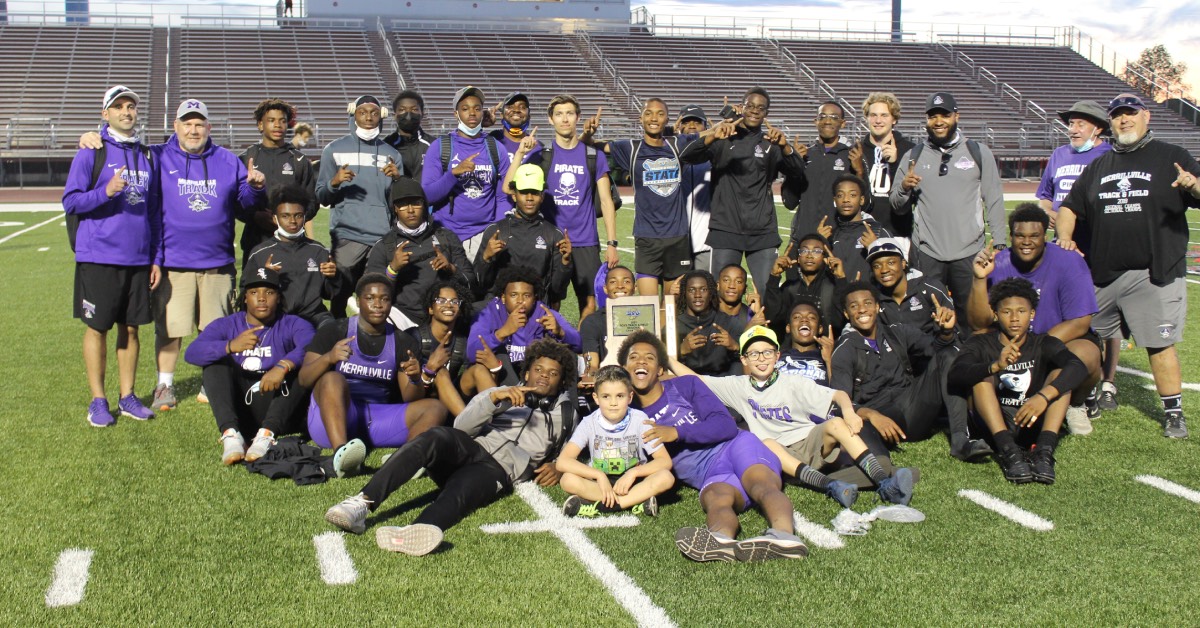 “I’m thrilled with the guys, especially considering all the things they’ve struggled with through this year and last year,” said Patrick Coffey, Merrillville Track & Field head coach. “They’ve come together and made it work. Their camaraderie and the family atmosphere they provide every day, through the day, they’re cheering everybody on even when they’re not actually competing. I’m just really thrilled with how everything turned out.”

The Pirates were led by strong performances from a number of athletes, including Silas Mathis, who claimed first in high jump, Armani Glass, who topped the long jump competition, as well as their 4x100-meter relay team who took first with a time of 42.08. Other Pirates with strong performances were RJ Donald, who was victorious in 110-meter hurdles, and Kenneth Grant, who led the field in shot put by nearly 10 feet.

“It was strong all over, there were guys setting personal records all day,” Coffey said. “Look at Silas Mathis, with a 6’6 – he’s only been doing this for five weeks. Most importantly, our 4x100 broke our school record today which was consisting of four state guys and two state champions. They had a heck of a great day.”

Lake Central finished second on the day, helped along by Kameron Gethers’ victories in the 100 and 200-meter dashes.

“To be honest with you, my approach is just to go as fast as I can,” Gethers said. “It’s been a good day. I’m a sophomore, and I beat the two fastest people in the conference. I mean, that’s nice.”

Host Crown Point finished third, with one of their key athletes, Cole Simmons, winning the 800-meter run and completing one leg of a first place 4x800-meter relay effort.

“Before the races, I remind the guys that we’ve been training seven years up to this point – we can’t let any opportunity pass us up,” Simmons said. “It’s like, this is ours – go take it. I know we’re seeded to win, but we’ve still got to go out and execute at the end of the day.”

You can find the full results and individual Regional qualifiers at www.ihsaa.org/Sports/Boys/Track/2020-21/State-Tournament.