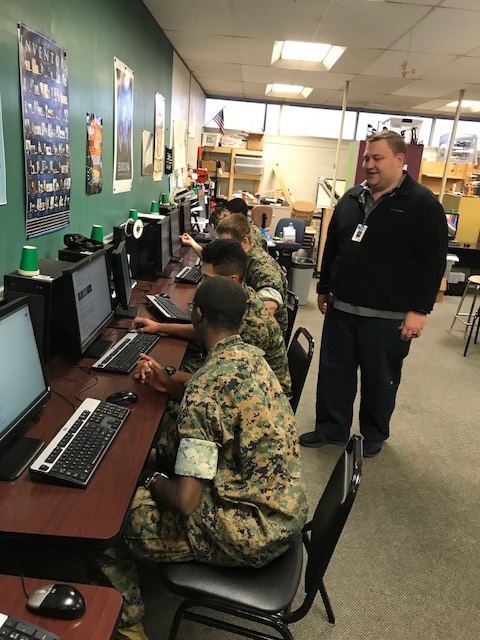 Rarely does a day go by without a news story of a security breach of a company’s or government agency’s information system. The cadets of the Michigan City High School (MCHS) Marine Corps Junior Reserve Officer Training Corps (MCJROTC) compete in Cyber Patriot, the national high school cyber security competition. It puts teams acting as Information Technology Specialists tasked with managing the network of a company. They are given a set of virtual images that represent operating systems, and are tasked with identifying breaches and then hardening the system while maintaining critical services in a six hour period. Cadets are striving to be the best team in Indiana and the Midwest. The top teams from each region will be provided an all-expenses trip to Baltimore, MD, where the national final is held. There, they can earn national recognition and scholarship money. The first round of the event was held on Nov 2nd. The cadets will compete in at least two more rounds in December and January. 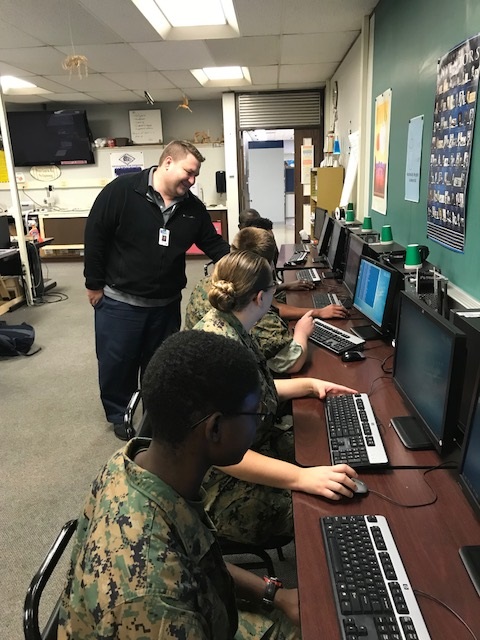 Mr. Ralph Gee, the Engineering and Technology Instructor at MCHS, has volunteered to be the Faculty Advisor for the team. “Cyber Patriot is such a great opportunity for high school students to be exposed to the cyber security field, where there are plenty of good-paying jobs with high job satisfaction.”

Major Tom McGrath, the Senior Marine Instructor, emphasized the value of cyber security skills and the potential benefit for the cadets. “Regardless of whether a cadet chooses the military as first career or decides to take a different path, knowledge of protecting electronic data will always be an asset that they can use to further their career.”

Master Sergeant Jeff Benak commented on the unselfishness of Gee. “As teachers, we all have plenty of tasks to do outside of the classroom. Preparing for e-learning has now been added to the To Do List. But Mr. Gee still finds time to assist us. He really is a true team player.”